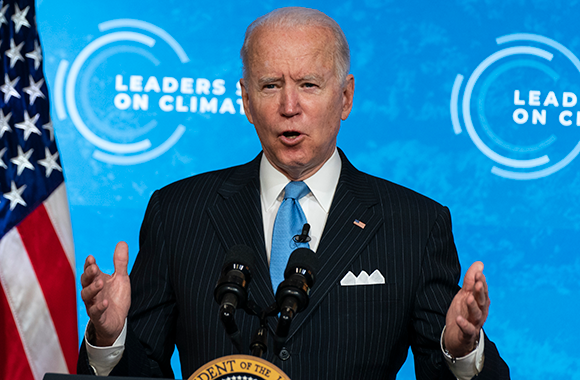 One Hundred Days In: Is Biden Making Good on His International Climate Pledges?

WI: Can you explain the timing of the scorecard?

JC: Traditionally, every presidency is re-evaluated at 100 days because that's considered the window to get the ball rolling on an administration’s big priorities. We're delighted to see that President Biden has very much used that time period to set the tone on climate policy.

WI: What does the Scorecard find?

JC: We looked at 15 of the most important pledges Biden made during the presidential campaign, nine of which focused on foreign policy issues. Of those nine, he's already really delivered on four, which is pretty impressive. He's made some progress on two, and on the last three, he's made baby steps at best.

WI: How does this compare with previous administrations?

JC: The bottom line is that the Biden administration is delivering as much or more than many climate advocates could realistically have expected. Yet much more needs to be done to get our climate back on a sustainable path.

WI: What has been a star accomplishment so far?

JC: I think the most important thing that Biden has done is changed the mindset and the messaging throughout government: climate change is a serious priority. He’s communicated that it has to be top of mind across the board—not just for the State Department, but for every agency of the U.S. government. That is something I’d hoped for, but I wasn't sure it was going to happen. I'm delighted to see that.

WI: What are some other exciting steps he’s taken?

JC: On Earth Day, April 22, he made deals with four really important countries. Japan, Korea, and Canada all increased the ambitions of their targets in terms of reducing greenhouse gas emissions. And India and the U.S. agreed on a new partnership around clean technology development. Much of the growth in coal-fired plants is happening in India, so to the extent that the U.S. can help them shift toward renewables and away from of coal, that's a huge win.

WI: What should be next?

JC: Over the next 20 years, the most important thing we can do is cut down methane emissions. Methane is strongly associated with natural gas, which gets leaked from pipelines and flared when it’s produced. Michael Regan, the new Environmental Protection Agency administrator, has said that he'll be laser-focused on methane. The government has to work with industry to get this done. There are costs associated with tightening things up, which probably explains why the EPA is moving a little bit slower on the issue. But if they do it right, U.S. businesses will come along. They can make a really big difference, because methane is much more potent than carbon dioxide.

WI: Who do you hope will read this scorecard?

JC: I hope that the Biden administration itself will read it, including people on the National Security Council and in the State Department, because this is focused on the foreign-policy dimensions of their climate efforts. But I also hope that it will make some news in the wider public because we, as U.S. voters, need to hold our representatives accountable.

Housed at the Watson Institute, the Climate Solutions Lab is dedicated to creating, learning, and distributing solution-oriented climate knowledge. In October 2020, CSL released a comprehensive report, Presidential Climate Action on Day One: A Foreign Policy Guide for the Next U.S. President, a sweeping set of recommended actions, both domestic and international, to address this global challenge.