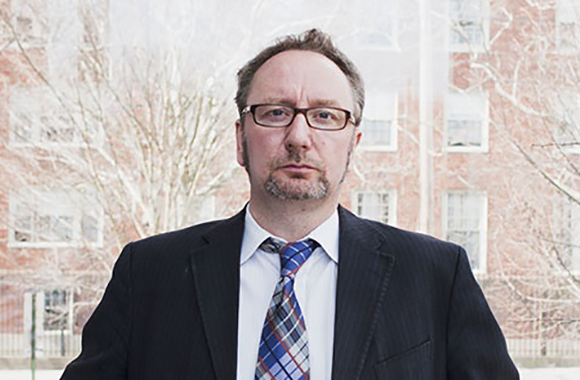 "Mark Blyth is a mentor who combines scholarly brilliance with humor and wisdom, who knows when to hand-hold and when to cultivate independence, and who challenges students with academic rigor but also encourages public intellectualism."

Award recognizes professor for being a mentor par excellence.

Reading the letters of the former mentees who nominated Mark Blyth for the 2022 SWIPE Award for Mentoring Women in International Political Economy, you could be forgiven for thinking the other nominees never had a chance.

“No one is more deserving of this award than Mark,” wrote Jazmin Sierra PhD’15, now an assistant professor in Political Science and a Kellogg Institute for International Studies faculty fellow at the University of Notre Dame. “He encouraged me to think big, but not to think like him. … Well past my graduation, Mark remains an inspiring, intellectual, generous, and kind mentor.”

According to Ling Chen, whom Blyth mentored when they were both at Johns Hopkins University and who is now an assistant professor at the School of Advanced International Studies there, "Mark Blyth is a mentor who combines scholarly brilliance with humor and wisdom, who knows when to hand-hold and when to cultivate independence, and who challenges students with academic rigor but also encourages public intellectualism. Without his support, I would not have been able to have my current academic career."

“As an academic, Mark is a live wire. He sparks ideas and makes novel connections at a dizzying rate. Working with him was nothing short of electrifying,” wrote Oddný Helgadóttir PhD’18, now on the faculty of the Copenhagen Business School. She considers his mentoring, which she describes as “relentlessly supportive,” as being “the privilege of a lucky lifetime.”

Mentoring women is important, according to Blyth, in part because in classes and seminars, men too often do most of the talking—yet making oneself heard is critical to success in an academic career. Blyth tells his mentees, “’You're going to have to give talks. You're going to have to sell your work in a marketplace of other people. … So much of this is about finding your voice in that broader sense of finding your voice.’

“I just give them the space where they can actually hear their own voice because they're not being drowned out,” he says.

Taking the risk of writing down and then sharing one’s ideas is also critical, according to Blyth. “You can have a brilliant thesis in your head and you can talk about it all the time, but eventually you have to write it down and allow other people to see it—including when it's not perfect.” Only once a scholar has started to produce, he adds, can a mentor give commentary and intellectual support.

Sierra says Blyth provided both of those things in spades. “Mark knew how to walk the fine line between praise and constructive criticism,” she recalls. “His level of dedication made me a better researcher—but also one who continued to love doing research.”

According to Chen, “He read my class papers, commented line by line, and encouraged me to publish at an early stage, at the end of my first PhD year, when I still felt timid about publication. But it worked and these papers were all published the second year.”

In addition to doing this “nitty-gritty work of being a good adviser,” wrote Helgadóttir, “Mark has the rare virtue of never forcing you to sacrifice what really interests and motivates you to conform with disciplinary orthodoxy or to try to game the job market. Instead he holds you to a high standard so that if you choose to pursue unusual topics, you really have to give them your best shot. … [W]ithout this kind of thinking, academic disciplines are at high risk of degenerating into arid and uncreative reproduction of what has already been done.”

Jacqueline Best, now a professor of political science at the University of Ottawa, agrees. “Mark was always extraordinarily generous with his time and energy,” she says. “He let me figure out where I wanted to go and supported me all the way. He never tried to make me fit into any particular theoretical mould or take a particular angle on the questions that interested me. Over the years, I’ve come to see both how important that is in a supervisor—and how rare.”

The scholars also cited myriad ways in which Blyth went above and beyond the usual advising role to further their careers, writing letters of recommendation for positions, fellowships, and grants, traveling on weekends to help practice job talks, and hopping a train to Providence following an international flight just in time to personally hand a mentee her diploma.

Despite Blyth’s appearing a little “scary,” says Helgadóttir, “the unvarnished truth is that he is one of the kindest and most nurturing people that I have ever known. He is not just unusually intelligent, as is plain to anyone who meets him, but also unusually emotionally intelligent.”

For Blyth, this award is particularly gratifying because “it's not about what you produce, it's about what you do with other people. To be recognized as being someone who's enabled the work of these scholars, that’s the best honor you can get in my game.”