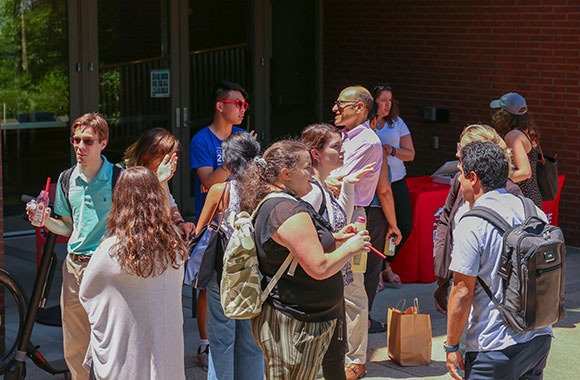 In 2019, anthropologist Nadje Al-Ali came to the Watson Institute from SOAS University of London, arguably one of Europe’s most diverse and progressive universities. There, in addition to doing research and teaching, she served as equality and diversity representative and eventually chair of the SOAS University College Union (UCU) branch, the trade union for academic and support staff.

That same drive to “become involved” pushed her to join Watson’s Diversity and Inclusion Committee, a group formed in 2016 and made up of students, faculty, and staff. Then, last September, she and MPA Program Manager Melissa Nicholaus became co-chairs of the committee.

“As a woman of color who is a full professor, I feel it's my responsibility to try to push for change,” Al-Ali says. “And that involves stepping up.”

Al-Ali, who is the Robert Family Professor of Middle East Studies, says that she and her co-chair bring complementary skills and expertise. She especially values Nicholaus’s institutional knowledge and extensive experience with students, staff, and the Providence community.

She and Nicholaus, who joined the University’s DIAP committee when it first started and now serves as diversity and inclusion liaison for Watson, share a vision of “connecting the dots,” Al-Ali says – that is, not just “checking a bureaucratic ‘diversity and inclusion’ box,” but actually working with groups across campus that are engaged in similar work. These include the student-run group Decolonizing at Brown, the Anti-Black Racism Task Force, and the Watson Student Advisory Council.

“One of the problems is that you have these different entities and initiatives, but they're not talking to each other. Although we're just Watson, our mission is to make sure we don't interpret DIAP in a limited, institutional way. We have a wider vision of making connections,” she says. She sees the potential for the committee to be “a real tool for transformation and change.”

Last March, for example, Watson’s DIAP committee and DAB jointly organized an event in which students presented resources they developed to enable faculty to assess courses in terms of how “decolonized” they are; their four measures were cultural engagement, interdisciplinary engagement, addressing marginalization, and integration and organization of course materials. Several Watson faculty, including Catherine Lutz, Mark Blyth, Geri Augusto, and Patrick Heller, presented their efforts at decolonizing their own syllabi.

Sociologist Heller found the event “incredibly useful and constructive, both because it was important to hear from students and to think through as a community how we can make the curriculum at Watson more diverse and more inclusive.”

Students and faculty, he adds, “offered a wide range of really innovative existing and proposed strategies for making syllabi more inclusive of post-colonial perspectives and realities, including a greater focus on global inequalities.”

DIAP also co-hosted a meet-and-greet for first-years and MPA students on June 15, where students learned about DIAP’s focus groups. “The event was really successful,” says Nicholaus. “One thing I did not anticipate was the way the MPA students ended up ‘advising’ the first-years.”

After a year of being unable to hold in-person events for first-gen students and students of color, she explains, “we wanted to take a pulse to see what things will look like when we're all back together again. Will there be a speaker series? What does advising look like for these students? Are there ways that we can provide better mentorship?”

The committee is also working with members of the Watson Student Advisory Council, including the community-building subgroup.

“DIAP allows me to see the big picture,” says Nicholaus. “Before, it was a lot of one-on-one interactions. Now, being co-chair, I can look at Watson holistically. Through my work with students, I’ve recognized that we need to do a better job of servicing our first gen students and our students of color.

“We can theorize decolonizing and anti-black racism and diversity, but for me, DIAP is also about community within Watson: how can we become more sensitive, warmer, more human, more inclusive, more welcoming?” says Al-Ali.

Nicholaus agrees: “I want people to feel not only welcomed, but like they belong.”