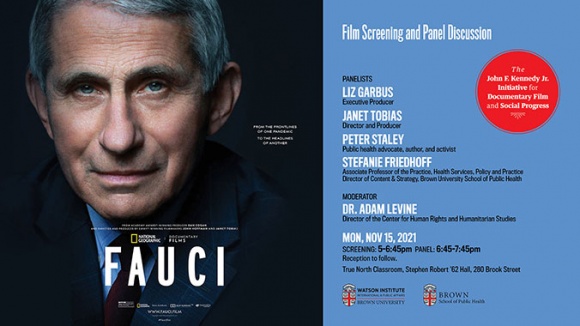 John F. Kennedy Jr. ’83’s passion for and commitment to social justice and the pursuit of truth lives on, thanks to the generosity and dedication of Kennedy’s family, friends, and fellow alumni who established the John F. Kennedy Jr. Initiative for Documentary Film and Social Progress in 2019. Through this initiative, Brown University’s Watson Institute for International and Public Affairs, welcomes filmmakers - and their documentary films - to the campus to shine light on some of the world’s most intricate, immediate, and, perhaps, intractable issues.

“So many of us feel like the world is on fire right now,” said Watson Director Edward Steinfeld. “Kennedy had interests in humanity, the arts, and journalism and was committed to translating those interests into outcomes that address world problems and improve the lives of ordinary people. The Watson Institute has that same kind of mission.”

This year’s inaugural event, a screening of the National Geographic documentary, Fauci, on Monday, November 15, couldn’t be timelier. “The pandemic has certainly underscored for us that global challenges are not about a single issue; rather, they are about global politics, sociology, and communicating with people,” said Steinfeld. “Scientists are scrambling in real time to understand a global crisis.  Our findings and understanding change – whether about public health, climate, or issues of equity – and yesterday’s understanding may not be consistent with those of today or tomorrow. What does that mean for the way our work intersects with the broader public?

“Through this initiative,” said Steinfeld, “we encourage people to be critical thinkers and film viewers, consider underlying assumptions, and evaluate how messages resonate with different people. Fauci is so visually arresting that the power of its narrative allows us to have discussions that we might not be able to do through a lecture or a panel discussion.”

The film, which Liz Garbus ’92 directed, profiles Dr. Anthony Fauci, an internationally respected infectious disease specialist who has managed the nation’s response to epidemics, including HIV/AIDS, SARS, and Ebola, and, most recently, the Covid-19 pandemic. Bono, Bill Gates, former National Security Advisor Susan Rice and Fauci’s family, friends and former patients, among others, are interviewed in the film.

After the screening, Emmy Award-winning documentary director Janet Tobias, two-time Academy Award nominee Liz Garbus ’92, associate professor of the practice, health services, policy and practice, and director of content and strategy at the Brown University School of Public Health Stefanie Friedhoff, and public health advocate, author, and activist Peter Staley will participate in a panel discussion that Steinfeld will host and Dr. Adam Levine, director for Watson’s Center for Human Rights and Humanitarian Studies, will moderate. Brown University School of Public Health is a co-sponsor of this program.

The John F. Kennedy Jr. Initiative offers a robust schedule of documentaries and panel discussions. Tune back regularly for additional events, including some of these upcoming highlights:

“So many of Kennedy’s fellow alumni – including [Liz] Garbus, Davis Guggenheim ’86, Rory Kennedy ’91, and Randall Poster ’83 ­– generously and graciously supported the initiative. That’s thrilling, but not surprising,” said Steinfeld. “Our most successful and impactful efforts always involve partnerships with Brown University and beyond.” The Fauci program underscores Watson’s collaboration with Brown University’s Warren Alpert Medical School and the School of Public Health, where Levine holds faculty appointments. The entire initiative is being done in collaboration with Brown Arts Institute.