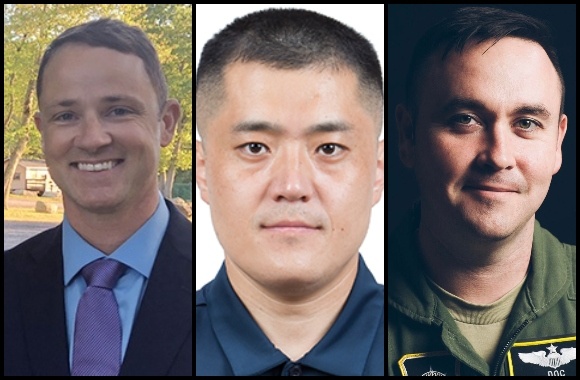 From the conflict in Ethiopia to the earthquake in Haiti to the violence and chaos following the U.S. withdrawal from Afghanistan, crises around the world remind us daily that effective responses to national and human security issues and humanitarian crises must be informed by both civilian and military expertise. The Watson Institute's Military Fellows Program aims to facilitate that two-pronged approach.

Established in 2019 with a grant from the Carnegie Corporation of New York, the one-year Military Fellows Program gives U.S. and international mid-level military officers the chance to participate in security-related research, seminars, classes, and public events alongside the Institute’s faculty, students, and policy practitioners.

The program is directed by Dave Polatty, Watson Senior Fellow, the founding director of the U.S. Naval War College’s Humanitarian Response Program, a Captain in the U.S. Navy Reserve, and the Navy Emergency Preparedness Liaison Officer to Rhode Island. A former visiting fellow at Watson’s Center for Human Rights and Humanitarian Studies, his research focuses on civil-military coordination in humanitarian response. He is currently involved in several human security related research projects with Brown, the NWC, Stanford Law School, InterAction, and the Center for Civilians in Conflict (CIVIC).

For Polatty, Watson offers a setting in which scholars and military leaders can have honest and open discussions about some of the world’s most pressing issues while learning from each other. “It’s a safe, welcoming, and neutral academic environment where we can seek to find common ground and innovative solutions to global problems,” he says. “The program places these officers in a university setting where they can do research and engage with brilliant faculty and students, advancing dialogue in the area they choose to pursue.”

This year, the program’s inaugural cohort comprises three Fellows: Hongkyu Kim, an officer in the Republic of Korea Army; Jake Lunsford, an officer in the U.S. Marine Corps; and Theodore Shanks, a U.S. Air Force officer and command pilot. Polatty hopes that the next cohort will see further expansion and contain officers from all four branches of the U.S. military, as well as international officers.

Since 2016, when it renewed its Naval and Air Force Reserve Officer Training Corps programs, Brown University has made significant efforts to expand its military and veteran populations and to be more welcoming and inclusive to military-affiliated students. Indeed, Polatty recalls many fruitful discussions in the classroom during his time as a fellow – including two years ago, when political scientist Rose McDermott invited him to co-teach in her Foundations of Security class. The class included numerous veterans and ROTC students, and Polatty says they and the non-military-affiliated students had meaningful dialogue about a broad range of human security issues – for example, the consequences of conflict on vulnerable populations and humanitarian aid workers.

“I think everyone in the Brown community appreciates that we really are helping develop future leaders who will go out into the world and do incredible things for humanity,” Polatty says. “To prepare them for the overwhelming challenges that we will continue to face from conflicts, climate change, and pandemics, it’s important that we give them the opportunity to think deeply about civil-military coordination issues in the classroom, years before they may serve in critical decision-maker roles.”

The fellowship is “a unique opportunity to engage with some of our generation's top minds,” says Shanks, who participated in combat operations in Afghanistan, Iraq, Syria, and East Africa.

Such engagement, he adds, “will provide insight and perspectives rarely afforded a professional military officer. I look forward to meaningfully contributing to Watson's academic mission, and to sharing my perspective, knowledge, and experiences. I can't wait to watch our communities grow over the next year through dialogue and engagement!”