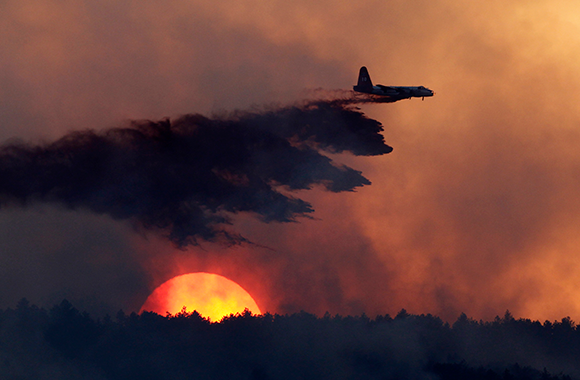 A new Brown University report critically examines the National Climate Assessment (NCA), the U.S. government’s official report on the science of climate change. With the Fifth edition of the NCA now in preparation, the Brown researchers strongly recommend the NCA include, for the first time, a “Summary for American Families,” and make specific changes to the NCA’s existing Summary, which fails to fully and effectively express the urgent implications of climate change for American lives.

Dr. Alexander Gard-Murray and Professor Jeff Colgan of the Climate Solutions Lab (CSL) wrote the report. The CSL is housed at the Watson Institute of International and Public Affairs at Brown University, where Colgan is the CSL director and Gard-Murray is a CSL post-doctoral researcher.

The new report, entitled "Is the United States Underplaying the Threat of Climate Change? Reevaluating the National Climate Assessment” identifies specific ways in which the lives of Americans are, and will be, worsened or shortened by climate change. Much of that information is already present in the full NCA, but it is hundreds of pages long. The authors of this report make the argument for having a short summary outlining the most pressing details that policymakers, the media, and citizens will actually read.

American lives have been and continue to be at risk

“From wildfires to premature births and higher infant mortality, all aspects of Americans’ lives are now being affected by higher air temperatures and worsened air quality,” says Colgan. “The impact of these climate changes will contribute to ever more detrimental impacts on most Americans, regardless of where they live, including lower income and lost wages; smaller agricultural harvests and higher grocery bills; flooded homes and underwater mortgages; closed roads and broken bridges; bigger blackouts and higher utility bills; weaker security and dangerous military deployments; and abandoned outdoor leisure time.”

Colgan and Gard-Murray argue that the next NCA needs to communicate its results in terms that are relevant for both policymakers and the public. The previous NCA’s Summary Findings discusses impacts in broad and non-specific language. For example, one part notes that “Impacts from climate change […] increasingly threaten the health and well-being of the American people, particularly populations that are already vulnerable.” Instead, the authors’ recommend more specific language: “Over the next 30 years, thousands more Americans will die from extreme heat and pollution, particularly people of color; thousands will contract diseases like West Nile Virus; asthma and allergy attacks will hospitalize thousands more, especially children and the elderly; and millions of days of pregnancy will be lost, endangering the health of mothers and babies alike.” Adding a new “Summary for American Families” to the next NCA could spotlight these key threats.

A failure to emphasize the urgency of the climate crisis would put the next NCA out of step with other assessments from experts on health and the economy. Just last week, the Lancet warned that climate change is "threatening to reverse years of progress in public health" and declared "code red for a healthy future." A day later, the Washington Post highlighted economists' clear message that "the fiscal risks of climate inaction vastly outweigh fiscal risks of climate action." The US government should speak just as plainly about the threat to Americans.

Since the publication of the Fourth NCA, scientific findings have also revealed new dangers, says Gard-Murray. “Each extra bit of warming doesn’t just add to your risk – it multiplies risk.” Among the new dangers we might face include massive earthquakes and tsunamis triggered by melting ice caps; abruptly rising sea levels that could threaten every continent’s coastlines and devastate American cities; and radically altered ecosystems could destroy rain forests and coral reefs.  But, says Gard-Murray, making bold investments in rapid de-carbonization can produce substantial benefits, not only for the Earth’s climate, but for the lives of all who live in the United States.

These suggested language changes – based on NCA’s current scientific data - are a modest, but meaningful, first step, says Colgan, to make clear to all Americans how climate changes can wreak harm on us all. “We sincerely hope that policy makers will use our report to impress upon government officials at all levels the urgency of immediate, evidence-based actions to slow the climate change crisis. Americans deserve the right to know and to understand these risks that will impact themselves and their families,” Colgan says.

The Climate Solutions Lab is dedicated to creating, learning, and distributing solution-oriented climate change knowledge, at Brown, and across the world. It is located at the Watson Institute, which is a community of scholars, practitioners, and students whose work aims to help us understand and address these critical challenges. It is committed to meaningful social science research and teaching, and animated by the conviction that informed policy can change systems and societies for the better. The new report reflects the views of its authors, not the Watson Institute or Brown University.