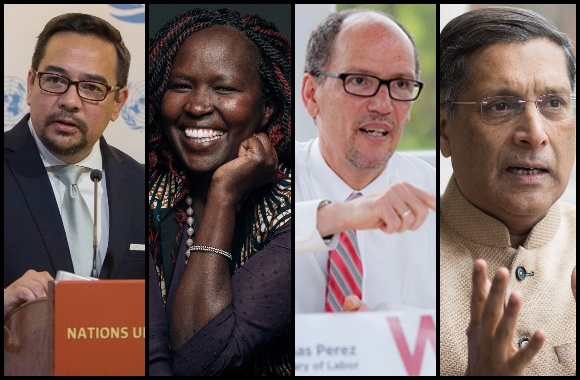 “What you're looking for in an institution is a commitment to the exploration of ideas, of different ways of thinking about the world. The Watson Institute has this commitment in spades.”

When students return to Brown this fall, they will once again have the opportunity to learn how theory and research can be put into practice to solve real-world problems, thanks to study groups led by Watson’s new cohort of Senior Fellows: Ambassador (ret.) Keith Harper, Kakenya Ntaiya, and returning fellow Tom Perez ’83. Pam Thiessen ’90, a longtime Senate staffer for U.S. Senator Rob Portman (R-OH), will join in spring 2022.

A citizen of the Cherokee nation and a practicing attorney, Harper is chair of Native American Law Practice at Jenner & Block, a large international law firm based in Washington, DC. He has served as Ambassador to the United Nations Human Rights Council—the first Native American to be named a U.S. Ambassador—and as an attorney for the Native American Rights Fund, among many other positions. He was also then-Senator Barrack Obama’s principal advisor for Native American policy and outreach in the 2008 presidential campaign.

No stranger to teaching, Harper says he looks forward to both sharing his experience with students and learning from them.

“I have found teaching to be really fulfilling,” he says. “You’re able to learn a lot from people of a different generation, because they think about the world differently.” Today’s students did not live through the Cold War, for example, which dominated for nearly 50 years how students think about international relations. “Working with different generations forces you to question certain base presumptions that are just baked in the cake of how you think about the world,” Harper says.

Conversely, Harper credits individuals in college and law school with helping him “become the professional I am today.” He hopes to serve as “a resource for students as they’re making their journey.”

Harper’s study group will look at international human rights writ large as well as at questions of indigenous rights as part of that system. “Whenever you talk about advancing the rights of a particular people,” he says, “you can go to court and sue, or you can seek relief in an international institution. We will compare which approach has greater efficacy.”

Ntaiya, who grew up in Kenya and went to college and graduate school in the United States, looks forward to returning to a university—a world of “theory”—equipped with her real-world experience. Engaged at the age of 5, Ntayia suffered female genital mutilation at 12, but told her father that rather than marry, she wanted an education. After earning her PhD in education from the University of Pittsburgh, she returned to her Maasai village and founded Kakenya’s Dream, today a network of boarding schools that provide education to girls in rural Kenya.

In addition to sharing her experiences working at the local level, Ntaiya plans to explore with students how they connect to the global level, and vice versa: “How does something the UN is saying translate on the ground?”

Ntaiya looks forward to meeting and working with her study group. “I like working with young people,” she says. “They bring so much creativity—they want to change the world. I want to show them that we don't have to wait for a perfect time to create a project or jump into that thing that they want to do in the world. It's important that young people step in early. I hope I can inspire them.”

Perez, labor secretary under President Obama and former chair of the Democratic National Committee, will bring to bear his nearly three decades of public service in all three branches of federal government and in state and local government as well. His study group, Leadership and Governance in Challenging Times, is intended to give students a “front-row seat to problem solving in and around a government setting.” Participants will hear from guest speakers and will be introduced to ethical questions, leadership challenges, public service careers, and more.

In addition, Watson is pleased to welcome Arvind Subramanian as a jointly appointed Senior Fellow with the Center for Contemporary South Asia and the China Initiative. Subramanian, a distinguished non-resident fellow at the DC-based nonprofit think tank Center for Global Development, is a former chief economic advisor to the government of India and has also worked at the International Monetary Fund. He researches the economics of India, international trade, and economic growth, and has taught at Harvard University's Kennedy School of Government and at Johns Hopkins University. As the Meera & Vikram Gandhi Fellow at the Center for Contemporary South Asia, Subramanian will teach The Indian Economy and India and China this academic year.

When considering taking on such a position, he says, “what you're looking for in an institution is a commitment to the exploration of ideas, of different ways of thinking about the world. The Watson Institute has this commitment in spades.”