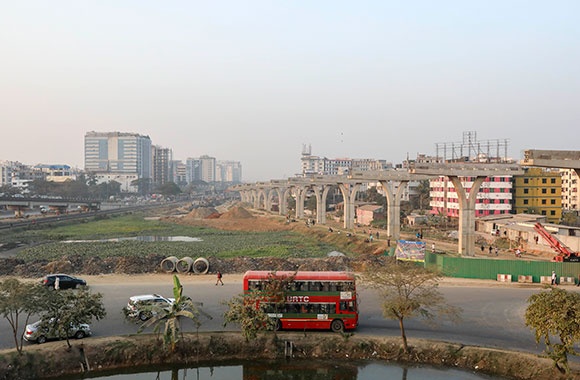 All Eyes on South Asia: Experts provide insights into a tumultuous region

The past decade has seen the rise of nationalism and right-wing populism throughout the world, and India has been no exception. Since Prime Minister Narendra Modi and his Hindu nationalist Bharatiya Janata Party came to power in 2014, political scientist Ashutosh Varshney has been providing a steady flow of commentary in both scholarly publications and the media to shed light on the changes in that country.

As the director of the Center for Contemporary South Asia, Varshney convenes scholars and practitioners from across the world to examine this complex, populous, and highly diverse region of the world that comprises Afghanistan, Bangladesh, Bhutan, India, Maldives, Nepal, Pakistan and Sri Lanka. The CCSA takes a comparative approach to studying regionally relevant issues such as inequality, development, urbanization, democracy, and more.

And COVID-19 has not slowed the Center or the research down. Over the past 18 months, Varshney has written six articles (currently in various states of review and publication), including one titled “Jim Crow Hindu Nationalism,” which draws parallels between the way the 11 confederate states of the South dealt with African Americans after the American Civil War and the discriminatory policies and practices Muslims are enduring in India under Modi and the BJP, such as disenfranchisement, segregation, and even lynching. In other articles, he looks at populism, nationalism, affirmative action, and the state of Indian democracy.

Varshney is also working on a joint project on citizenship and urban governance with sociologist Patrick Heller, professor of international and public affairs at Watson. The project entails using surveys, focus groups, and interviews to sample [tens of] thousands of households in 15 Indian cities to determine how cities are governed – specifically, how they deliver things like water, sanitation, education, and basic healthcare to their residents.

“These cities don't have the degree of autonomy that we associate with most large cities,” Heller says. “They tend to be governed by higher-level entities, like states. We’re interested in having a better understanding of how mega-cities, some of which have 20 million-plus people, provide basic services.”

Importantly, unlike most existing research on India, which centers on rural citizens, this work is producing vast amounts of data on urban populations, including on those living in the “informal sector,” or slums, about whom we know very little when it comes to provision of services. This matters, Heller says, because “the growth in poverty will be urban.”

Although India is still predominantly rural, the number of people living in its cities (approximately 320 million) could double in the next 30 years. Heller and Varshney’s project will eventually provide data for all of India’s mega-cities, including Mumbai, Bangalore, Chennai, and Kolkata.

“This is the great question of the 21st century: What do you do with all these new people pouring into India's cities?” Heller says. “Having better data and a better understanding of how governance, politics, democracy, social movements, NGOs, and civil society shape governance will help policymakers understand what works and what doesn't.”

Other experts at Watson bring critical perspectives to the conversations about this key part of the world. For example, Prerna Singh, Mahatma Gandhi Associate Professor of Political Science and International and Public Affairs, is comparing state-society relations in China and India through the lens of public health, focusing on the control of infectious diseases--small pox and COVID-19, respectively-- through the uptake of vaccines in the nineteenth and twentieth centuries. She has also written about the effects of anti-democratic politics on the COVID crisis in India, which she has called an “electoral autocracy.”

The Center also has two postdoctoral associates this year (both of them Watson postdoctoral fellows). Geographer Sangeeta Banerji conducts ethnographic research in the “politics of informality” in cities of the Global South. Zehra Hashmi, an anthropologist and historian, explores the everyday workings of surveillance in Pakistan through the intersection of identification, migration, kinship, and postcolonial and colonial governance.

This fall the Center has kept a spotlight on the region. The CCSA has convened an array of renowned figures and top-level experts. Kicking off the new academic year, Varshney teamed up with Brown’s School of Public Health to present a daylong conference on COVID-19 in South Asia, featuring Ashish Jha as well as speakers from around the world.

The Center’s Meera and Vikram Gandhi Fellow for the next three years (and a senior fellow this year at the Watson Institute) is Arvind Subramanian, a former chief economic adviser to the Government of India and the author of the award-winning book Eclipse: Living in the Shadow of China's Economic Dominance. In October, Subramanian and Raghuram Rajan, a former governor of the Reserve Bank of India and former chief economist and director of research at the International Monetary Fund, discussed whether India’s economy is likely to return to its high-growth path. Other events have featured Husain Haqqani, Pakistan’s ambassador to the United States from 2008 until 2011, writer Salman Rushdie, and filmmaker Mira Nair.