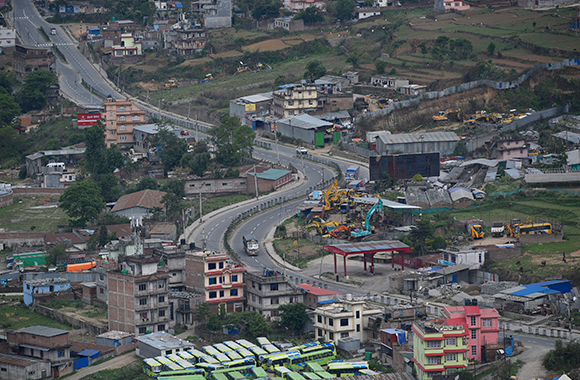 Building an interdisciplinary network of experts to understand a giant player on the world stage.

Watson’s China Initiative welcomed two new visiting professors this semester: Deborah Seligsohn, an assistant professor of political science at Villanova University, and Lyle Goldstein, who for 20 years served on the faculty of the Naval War College, where he founded the China Maritime Studies Institute.

In addition to bringing scholars and practitioners like Goldstein and Seligsohn to Brown, Edward Steinfeld, director of the Watson and of its China Initiative, envisions bringing experts from China (when relations and travel conditions between the two countries are more favorable) and sending undergraduate and graduate students who focus on China into the field. The China Initiative Summer Research Awards support thesis and doctoral work, including field research in Mainland China or Taiwan.

Steinfeld says that along with social scientists, the China Initiative will welcome scholars from public health and the STEM disciplines. And he recently created a humanities postdoctoral position based in the Department of East Asian Studies.

An expert on energy, climate, and the environment, Seligsohn spent two decades in the US Department of State working on energy and environment issues in China and elsewhere. She has also worked in the NGO sector, serving as principal advisor to the World Resources Institute’s China Energy and Climate Program. She chose the academic path “to think about deeper questions, to start looking at root causes.”

While at the Initiative, Seligsohn is working on a book, based on her dissertation, about the nature of air pollution regulation there – specifically, how the Chinese government uses incentives to encourage large corporations to become advocates for air pollution reduction. Her work also examines the potential environmental benefits of corporate competition.

“Once there’s competition, if the government gets the incentives right, companies will compete to gain government favor, and that will cause them to want to do the right thing,” she says. “That’s what you see playing out in the air pollution sphere in China.” Which is why, she adds, “there is no reason not to be hopeful about Chinese progress on a range of environmental issues.”

Indeed, she says, China has a lot to teach the world, including “the importance of bureaucracy and governance in achieving goals,” from cleaner energy to public health outcomes.

Seligsohn has two scheduled talks this spring: Clean Before Free: How an Autocracy Conquered Air Pollution in China, took place on April 13. The second talk, How the US - China Science Relationship Went Off the Rails, will be a virtual event on April 28.

Seligsohn’s reframing is in keeping with the Initiative’s stated goal of “learning about China, and learning from China.” And it’s what Steinfeld characterizes as the fresh perspective on China the Initiative seeks to foster.

“There's been this pattern of the US – and the advanced industrial world – teaching China. For example, when the American CDC helped set up the Chinese equivalent, it was a very ‘big brother, little brother’ model. As Deb’s work shows, the Chinese were receptive to it, but then they developed a lot of capabilities – like in public health, including around COVID-19 – that are seen as threatening or frightening or disruptive to the status quo.” Seligsohn’s work, he says, shows that China’s rise is not by definition adversarial.

“It all comes down to China”

No stranger to the Watson Institute, where he taught from 2011 to 2013, Goldstein too believes we should learn all we can from China.

Goldstein also serves as director of Asia engagement at the Washington think tank Defense Priorities, which advocates for realism and restraint in US defense policy; he will draw on that expertise in his work with the Watson-based Costs of War. With colleagues from that project, which for the past decade has studied the costs of the post-9/11 wars, he plans to investigate the costs of competition with China and Russia. He credits Watson Senior Fellow Chas Freeman with this new focus, noting that while the term New Cold War is controversial, “to me, it's a statement of fact. The tensions are there.”

Colleagues at the Naval War College have been studying those tensions closely and planning for various wars of a catastrophic nature, which Goldstein finds disturbing.

“Our country really needs to find better ways to cooperate and build a world system that's more sustainable, stable, and peaceful,” he says. “Costs of War can make contributions by taking a skeptical look at this ‘New Cold War’ and trying to advocate for sensible solutions. Because compared to the War on Terror, the costs of the New Cold War are astronomical.”

First, though, Goldstein has turned his focus to the Russian invasion of Ukraine and its implications. In a forthcoming paper, he shares his initial findings about Russia's military weakness and recommends that the US avoid overreacting militarily.

Goldstein’s expertise on the China-Russia relationship – which includes fluency in both languages and a book on the topic in progress – has arguably never been more needed. At Watson, he has hosted a weekly seminar, open to all, to discuss the unfolding conflict in Ukraine – a conflict he all but predicted in an article he wrote two years ago urging “adroit US diplomacy” to improve Russia’s relationship with Ukraine.

He and Steinfeld are also planning a series of lectures over the coming semesters that will dive deeply, one at a time, into China’s main relationships– with Russia, the Korean Peninsula, Japan, and India. The ability to collaborate with the recently endowed Saxena Center for Contemporary South Asia is a real asset, he says.

Bringing scholars like Goldstein and Seligsohn to the China Initiative, says Steinfeld, “is all part of building a community.”