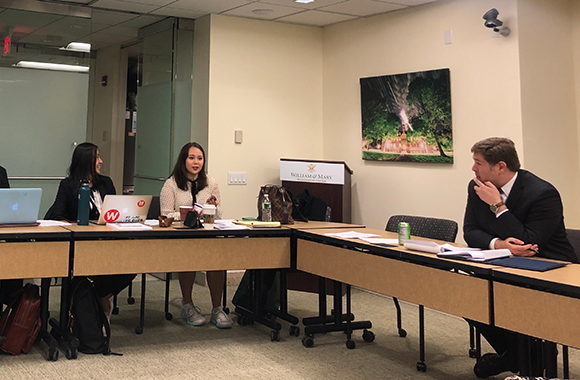 "[Communicating effectively] is everybody’s job, every day, and often we don’t even realize we’re doing it. Big things, little things – every day you are the message and you are the messenger."

See One, Do One

When David Wade ’97 was approached about designing a course for Watson’s Master of Public Affairs program, the former chief of staff to the U.S. Department of State asked himself: What did he wish he’d be able to study while at Brown?

“I've always thought, looking back, if only I’d had a real-world communications course,” he says, because whether you’re sitting in a boardroom or standing at a podium or just sending an email to colleagues, communicating effectively “is everybody’s job, every day, and often we don’t even realize we’re doing it. Big things, little things – every day you are the message and you are the messenger.”

Wade’s new course, Communication on the Political and Global Stage, is designed to give MPA students a “look behind the curtain at how effective communication is made” by exposing them to an array of seasoned experts from both political persuasions. After each guest’s lecture, students turn to the task of producing an example of what they’ve just been taught – from a debate prep memo to a six-minute convention speech to a set of jokes.

Wade (who “grew up in a family of public school educators” and has taught a foreign policy seminar in the Brown in Washington program) is well positioned to teach students a thing or two about communication. His first job out of Brown was as Senator John Kerry’s speechwriter. Over the following two decades, he served as national traveling press secretary for John Kerry for President and national spokesperson and traveling communications chief for Joe Biden’s successful 2008 vice presidential campaign. He is passionate about teaching students how to glean information about a topic from multiple sources, analyze it, and then use it to craft a recommendation.

Wade has also included fellow alumni Jeff Nussbaum ’97, senior speechwriter for President Biden, and Jill Zuckman ’86, a former journalist and an expert in public affairs and crisis communications. “I was lucky to have classmates who went on to phenomenal careers in communications, and other alumni who taught me so much when I got to Washington” he says. “I want to leverage their enthusiasm for Brown.”

Wade, a political science concentrator who also studied English and American history, is passionate about teaching students how to glean information about a topic from multiple sources, analyze it, and then use it to craft a recommendation. Writing an op-ed is one of the course’s key lessons. “Having to force yourself to shrink your argument down to 700 words and focus, scraping away the excess while preserving what’s essential, to really be succinct – that's one of the best ways to learn writing,” he says.

And the most “interesting” assignment, he adds, will probably be the humor writing: “It's such a stretch for everyone.” That segment, described as “writing comedy for unfunny people,” will be taught by Jon Macks, top writer for The Tonight Show with Jay Leno. The assignment? Write a “hook” for a comedy bit to be performed by the President at the White House Correspondents Dinner.