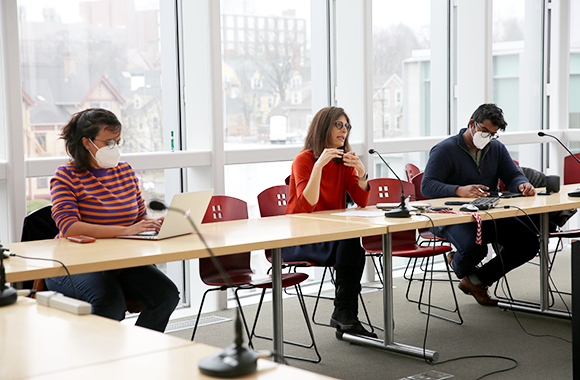 A Multidisciplinary Approach to Development in the Global South

The inspiration for the Graduate Program in Development (GPD), says Patrick Heller, professor of sociology and international and public affairs, was to provide an interdisciplinary platform for doctoral students interested in development or the global south.

Now deeply embedded in Watson’s community after more than 15 years at the institute, the GPD began as a pilot project with three goals: to provide interdisciplinary training in the otherwise highly insular doctoral programs; develop a focus on the global south; and create opportunities for doctoral students to get into the field and experience data collection methodologies.

“GPD program participants benefit from the interdisciplinary symbiosis of anthropologists, economists, historians, and sociologists coming together, who do research in different parts of the world, including Kenya, Mexico, China, and India,” says Nitsan Chorev, GPD director and professor of sociology and international and public affairs. “That is especially beneficial as we offer these opportunities early in the students’ academic studies, before they commit to their dissertation projects.”

“While traditional social science departments focus on the United States and Europe, the GPD creates a diverse community of scholars with shared interests,” says Heller, who was the driving force behind GPD, with help from Professor of Political Science Richard Snyder.

With fellowship funding from the Watson Institute and the Dean of Faculty, which frees GPD fellows’ need to hold a teaching or research assistant position for one year, the GPD is the only Watson program providing this kind of support for PhD students.

In addition to this highly competitive fellowship program, which accepts only eight fellows each year, the GPD has hosted 100 PhD students – called “trainees” – in its diverse programs and courses.

Since she became GPD director some six years ago, Chorev has launched several new programs. One of them is an annual workshop for Brown and MIT graduate students, organized together with Professor Jason Jackson of MIT. This year, Brown and MIT students will gather in early March at Watson to present and discuss their respective research on development issues.

“This collaboration, which started as a one-time event three years ago,” says Chorev, “was so successful and exciting that we held it even during Covid. We hope this annual program will become a permanent part of the GPD offerings.”

This semester, the Development and Governance Seminar (DGS) transformed into guided readings events, where students read assigned books before participating in discussion with the author.

Another Chorev initiative is spearheading is an April 5-6 symposium, “Global Capitalism in the Global South: Enduring Legacies and Recent Transformations,” addressing discussions of global capitalism and development together.

“The symposium will analyze how recent global capitalist transformations emerge in and/or impact the global south in particular,” says Chorev. “We will explore how such global capitalism manifests in right wing populism, welfare policies, the environment, health, and technology.”

Chorev adds, “These are not inexpensive initiatives. We are enormously grateful to Watson – under the leadership of Director Ed Steinfeld – and the Dean of Faculty for their generous financial support of our programming.”

Course work includes a one-semester seminar, Theory and Research in Development (IAPA 2000), that explores classic and current debates and research on development across the disciplines. Heller is teaching this year’s seminar.

GPD also offers one-week training modules – an opportunity for PhD students to learn methods outside their home discipline. Later this spring, GPD will offer two such modules – one on archival historical research with Associate Professor of History Jennifer Johnson, and one on field experiments, with Assistant Professor of Political Science Robert Blair.

For their pre-dissertation research, fellows and trainees may apply for summer travel funding. “The opportunity to enter the field before committing to a dissertation project is incredibly useful for our students,” Chorev says.

A different approach to thinking, questioning

Interdisciplinary understanding and curiosity are essential for the GPD. “We believe that exposure to other disciplines offers a great advantage to our students,” says Chorev. “It’s great training to think across disciplines. We see that students don’t fetishize disciplinary boundaries; they read relevant literature, not only what’s in their own discipline; and they can communicate across disciplines as well.”

“The GPD,” says Heller, “opens up different future trajectories for our students.” In addition to regular academic appointments in the U.S., GPD graduates have held influential senior-level policy positions at such institutions as the World Bank and the United Nations; some work in other non-academic research institutions; others hold academic positions in interdisciplinary programs; and still others have returned to academic or policy positions in their native countries, including one graduate who served as a senior policy advisor to the South African president.

“Unlike traditional PhD programs, we’re not just preparing them for academia; instead, we’re a platform for people who want to go into the broadly defined development world,” says Heller.