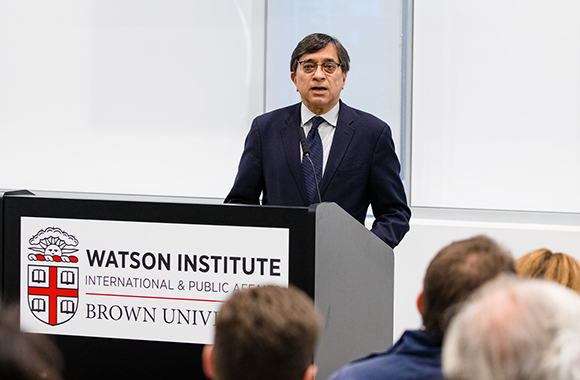 “Simply put, political, economic, and cultural developments In India will have an impact that is not confined to India. South Asia is strategically and economically important and likely to continue to rise.”

With a $10 million gift from Parag Saxena and Usha Saxena P’13, P’14, P’15, Brown University will elevate its groundbreaking teaching and research on South Asia and extend its global reach.

During its winter meeting in February, the Corporation of Brown University approved the naming of the Saxena Center for Contemporary South Asia in recognition of this generous support.

Formerly known as the Center for Contemporary South Asia, the Saxena Center, housed at the Watson Institute, promotes interdisciplinary research, teaching, and public engagement on key issues of India and the region. The gift will enable the Center to rise to the next level by expanding its footprint in research, teaching, public policy, and programming.

In particular, the gift will increase the number of undergraduate and graduate students the Center sends to India and other parts of South Asia for research and internships, and Varshney hopes to add new institutional linkages to its existing partnerships – with the Centre for Policy Research and the National Council of Applied Economics Research, both in Delhi, and with the Janaagraha Centre for Citizenship and Democracy, in Bangalore.

In addition, the Saxena Center will deepen its relationship with Brown’s School of Public Health, under the leadership of Dean Ashish Jha. Jha’s conviction that the problems of public health are not exclusively the domain of medicine, says Varshney, “made it easy to extend an intellectual arm for collaboration.” The Saxena Center and the School will work together to create academic programs at Brown and forge partnerships with Indian institutions.

The  Center’s origins date back to 2011 and then-President Ruth Simmons’s conviction that the international scope of a university like Brown should extend well beyond Europe to the Global South – including India and the rest of South Asia. At her invitation, Varshney created the India Initiative in 2012; the support has been ongoing under President Christina H. Paxson.

Although anchored in the social sciences, the initiative-turned-center has embraced the humanities and arts from the start. “The humanities have so much to contribute to our social, cultural and even political understanding that not to include them would make us intellectually poorer,” Varshney says. 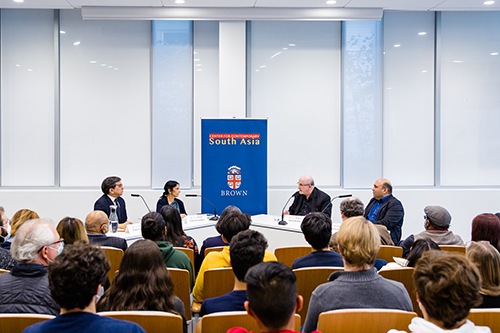 Varshney notes that until recently, South Asia was the second-largest region in the world after East Asia and is catching up demographically. Since the early 1990s, India has been the second-fastest growing economy in the developing world after China and has become the fifth-largest economy in the world. In recent years, Bangladesh has made great strides in public health and education, and Pakistan is important geopolitically. He points to the formation of the Quad (referring to the emerging partnership among Japan, Australia, India, and United States for the Indo-Pacific region) as a sign of the region’s importance to the current U.S. administration’s foreign policy.

“Simply put,” Varshney says, “political, economic, and cultural developments In India will have an impact that is not confined to India. South Asia is strategically and economically important and likely to continue to rise.”

“The Center for Contemporary South Asia has been, and will continue to be, extraordinarily successful in delivering path-breaking research and teaching on South Asia,” says Edward Steinfeld, director of the Watson Institute. “To me, though, the center has been doing something still more profound: using its work on South Asia to illuminate the fundamental human experience. Whether with respect to economic development, public goods provision, inter-ethnic relations, or any number of other areas, scholars at the Saxena Center are helping us better understand ourselves, whoever we happen to be, and wherever we happen to reside. It’s only through that kind of understanding that we can hope to resolve our collective societal challenges.”

A Transformational Gift with Global Impact

As three-time Brown parents, Parag and Usha Saxena’s affiliation with the University was initially through their children, but during their time at Brown the couple developed a personal relationship with President Emerita Simmons. In 2010, Parag traveled to India with Simmons to introduce her to his alma mater, the Indian Institute of Technology, Bombay, where he earned a B Tech in chemical engineering. The Saxenas were early supporters of the India Initiative, and their sustained philanthropy has contributed meaningfully to Brown’s India and South Asia programs.

Parag Saxena came to the United States to pursue an MS in chemical engineering and subsequently completed a MBA at The Wharton School at the University of Pennsylvania. His business experience spans four decades, with considerable activities and interests in South Asia as well as venture capital in the United States.

The Saxenas are excited about the prospect of furthering the work of the center in South Asia, and hope that their gift will foster discussion and research among policy makers and scholars in the social sciences.

But they also hope it will promote scholarship on and appreciation of South Asian literature, culture, and art, about which they are passionate. Last November, the Saxenas traveled to Brown, where they attended an event organized by Varhsney featuring the writer Salman Rushdie.

The Saxenas attribute their support for the Center to their Indian heritage and continued interest in India and South Asia, and to the Center's potential to influence debate and accelerate the momentum for positive change in the region.

Varshney notes that one of the greatest benefits of the Saxenas’ generous gift is the ability to pivot as world events shift or dialogue and research deepens.

“A gift that gives you that freedom is in principle transformational,” he says.