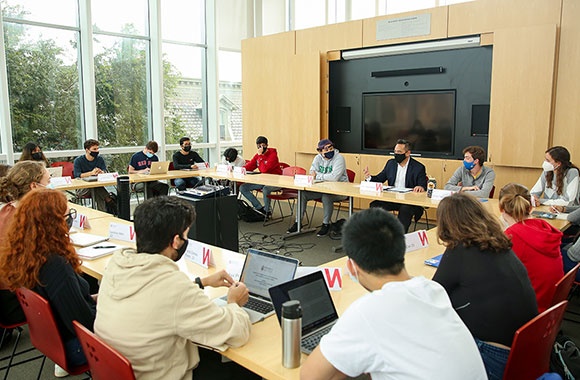 These not-for-credit study groups provide an opportunity for students to delve deeply into topics and apply theory and research to real world challenges.

A principal objective of the study group is to rigorously assess and reevaluate United States foreign policy generally and the methods for the promotion of human rights specifically in the 21 st Century. We will commence with an examination of both the way human rights are traditionally understood and how they are evolving. The study group will evaluate the means by which the United States - as a core part of its foreign policy - promotes the observance of human rights. Specifically, we will assess what works; what doesn’t; how could we do better? We will explore what the modern human rights system is and how it works from the U.N. Human Rights Council to treaty bodies and the Security Council among others. One of the central themes throughout the semester will be an assessment of what impact do these institutions have in the real world and real people and how they might be reformed so as to have greater efficacy. In addition, we will tackle some of the most challenging questions in international affairs writ large. These will include questions such as: when it is legal and appropriate to use military intervention to prevent atrocities and crimes against humanities; what is the interplay between human rights and economic development and what are the best practices in ensuring that we meet both of these goals; how do does the human rights system address the modern information age with the emergence – and in some ways dominance – of tech companies; what is the role of businesses in ensuring the protection and in some instances the promotion of human rights; and finally, with democratic norms being challenged in the United States, how, if at all, should that modify the United States approach to promoting democracy and human rights norms throughout the globe.

Leveraging Education in the Pursuit of Gender Equity
Kakenya Ntaiya

Gender equality is the 5th goal in the United Nations (UN) Sustainable Development Goals (SDG) and has dominated development discourse for centuries. Over the years, progress has been made towards gender equality for women. Countries have implemented laws to ensure women have equal access to political and economic leadership, they have addressed girls’ access to education and created strict laws to end harmful practices that hinder women and girls’ progress in general. Despite such progress, globally, women are still facing Gender Based Violence (GBV); they are more likely to be illiterate, poorer, and lack equal representation in political and economic leadership.

The study group will explore how progress toward gender equality has been undermined further by the Covid-19 pandemic and how small non-governmental organizations tackle gender inequality to create a better world for women and girls in East Africa.

In the first sessions of the study group, we will learn how Kakenya’s Dream, as a small nongovernmental organization, leverages education to address harmful practices that hinder girls from continuing with their education in rural Kenya. We will then move to hear from expert guest speakers working at the local and global levels to address gender equity. The goal of the study group is to provide students with the space to explore their interest in the development field especially using the gender lens.

In today's turbulent times, the journey to form a more perfect union often appears as difficult as ever. The “shortest distance” theory feels to so many as if it is seldom part of the playbook of progress in Washington, DC or elsewhere. A host of factors have created an atmosphere of hyper partisanship in which effective governance is elusive, and principled compromise is frequently derided as a four letter word. As a result, public confidence in our public institutions, especially at the federal level, is at a low ebb.

I have had the privilege throughout nearly three decades of public service to work in all three branches of the federal government, as well as in state and local government. I have had the privilege of running for office, leading federal and state agencies (large and small), and working on Capitol Hill for Senator Edward Kennedy. Most recently, I led the Democratic National Committee from 2017 until earlier this year. I have experienced success and setbacks. My education at Brown laid an important ethical and academic foundation for my future work. At the same time, as a student, I frequently observed that there was a wide gap between what I was learning in the classroom, and how things actually got done in the real world.

A principal goal of this Study Group is to bridge the gap between theory and practice. Specifically, I want to give you a front row seat to problem solving in and around a government setting—the “how does it really happen (or not happen)” dimension that is often absent from traditional classroom dialogue.