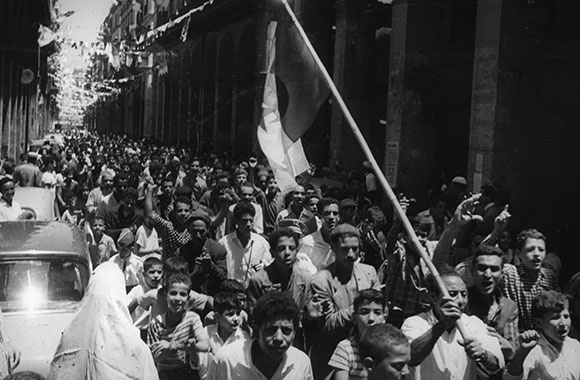 Visualizing Algeria, from Revolution to Independence

This October 12-28, the Center for Middle East Studies will host a series of events marking 60 years of Algeria’s independence. Organized by Adel Ben Bella, a doctoral candidate in Modern Culture and Media, the events will explore notions of revolution, independence, and decolonization through photographs and films documenting the construction of modern Algeria.

An exhibition will reveal rarely seen images by Algerian photographer Mohamed Kouaci, one of few photographers to document the Algerian revolution and the early years of independence. There will also be screenings of documentary and archival films from the revolution, and a symposium featuring Safia Kouaci, the photographer’s widow and an actor in her own right in Algeria’s battle for independence.

How did you come up with the idea for this conference and exhibition?

I have been engaging with the visual archive of late Algerian photographer Mohamed Kouaci as part of my research for some time now. In fall 2021 I started thinking about organizing an event at Brown University to coincide with the 60th anniversary of Algeria’s Independence, on July 5, 1962. It quickly became clear to me that one productive and still under-exploited way to look at this history was through visuality—that is, by looking at how it has been represented through visual materials such as photographs and film. That’s when the idea of putting Kouaci’s powerful vision of the Algerian Revolution at the heart of an event centered on visuality and the Algerian Revolution started taking shape. Since then, I have been working extensively in the US, but also in Algeria, to both develop my research and think about the best way to bring wonderful scholars of visuality and Algeria together at Brown.

What will the events entail?

The events will be threefold, comprising a photography exhibition in the Atrium Gallery at the Perry and Marty Granoff Center for the Creative Arts, and a film screening and in-person symposium on the Algerian Revolution and visuality at the Watson Institute. The exhibition centers on the work of Algerian photographer Mohamed Kouaci. Kouaci was one of the very few Algerian photographers to document the entire Algerian War of Independence (1954-1962) on the Algerian FLN (Front de Libération Nationale) side as well as the first few years of the new Algerian Nation (1962-1965). These photographs have never been exhibited in the United States before.

The film screening will bring together documentary and propaganda films made by the Algerians and the French during the war. And finally, the one-day symposium will bring together scholars, artists, and actors of this history in a conversation on the instability and constant evolution of recent Algerian history and the way it is narrated, primarily through visuality.

What lessons can we learn today looking back on Algeria's war for independence?

This is a very interesting and complex question, and also one of the important inquiries I am hoping this event will engage with. The Algerian Revolution and its narration are at the heart of the legitimacy of the contemporary Algerian State. In Algeria, a country with a very young population, this history is both long gone and yet ever present through the legitimizing and unifying narrative produced by the Algerian State. And yet, when looking at protests like the recent Hirak movement, which toppled then-President Abedlaziz Bouteflika—himself a pure product of the era of the Revolution—one cannot help but notice the younger generation’s attempt to appropriate the legacy of the War of Independence.

Through this event, we are hoping to expand the ways we think about the Algerian Revolution and Independence, moving beyond a simple history of violence and heroism to truly apprehend it in all its potentially liberating complexity.

More information on the events can be found here.