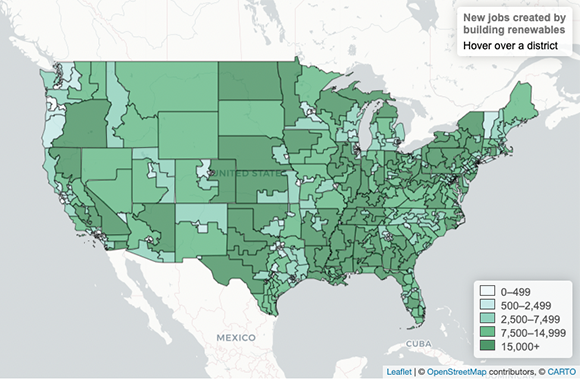 “On its own, acknowledging the climate crisis has not been enough to get us over the line to act…addressing opportunities for change must be part of the discussion. Scientists have done their work on these issues; it’s now in the hands of writers and journalists to share that progress.”

The Watson Institute’s Climate Solutions Lab is launching a new interactive website called the Climate Opportunity Map that allows users to enter any zip code to learn about the benefits that could occur in their area should the United States actively pursue a net-zero energy policy.

The brainchild of Dr. Alexander Gard-Murray, a postdoctoral fellow with the Climate Solutions Lab (CSL), the Climate Opportunity Map analyzes publicly available data from government and academics through a Python computer program he wrote. The Climate Opportunity Map offers journalists, activists, and policy-makers invaluable estimates of energy jobs created, reduced commuting delays, lives and labor hours saved, and reduced electricity costs that could be realized if America gets serious about decarbonization.

CSL Director Jeff Colgan sees the Climate Opportunity Map as a key tool to help shift the conversation about climate change from doom and gloom to a more positive narrative about the future that is possible if we pursue a clean energy transition.

“Collectively, people working on climate change have spent more time talking about the dangers of inaction and less about the near-term benefits of action,” says Gard-Murray. “When I first came to the Watson Institute, I worked with Jeff Colgan to publish an evaluation of the federal government’s report on the science of climate change. Two things became clear: first, there’s been so much focus on the negative impact of the climate change crisis – rather than the benefits of taking action – and second, scientific data were often difficult to access and not locally specific.” Those lessons drove Gard-Murray to reframe the issue of climate change by creating the Climate Opportunity Map.

Should the country invest boldly in clean energy and other climate solutions, the Climate Opportunity Map estimates that Rhode Island’s First Congressional district - home to Brown University - would see these gains within the next generation:

Labor hours, for example, could be saved by cutting extreme temperatures, and data from the Environmental Protection Agency (EPA) demonstrate the health risks associated with higher temperatures for farmers, construction workers, and others who work outside. “We take localized EPA estimates of how extreme temperatures will make it dangerous to work, and then use Bureau of Labor Statistics (BLS) data to project how many high-risk individuals in each Congressional district would benefit from less extreme temperatures,” says Gard-Murray.

The Climate Opportunity Map evaluates data from sources like the EPA’s 2021 Social Vulnerability Report, Stanford University’s 100% Wind, Water, and Solar Project, the Global Development Potential Indices project, NOAA’s Office of Coastal Management, the BLS, and the Missouri Census Data Center’s Geocorr project. The map projects impacts based on the country moving ambitiously on a path consistent with the Paris Agreement. These estimated economic and health benefits represent what would happen within a generation, rather than in the far future.

The Climate Opportunity Map, says Gard-Murray, is about making existing science more accessible. “On its own, acknowledging the climate crisis has not been enough to get us over the line to act…addressing opportunities for change must be part of the discussion. Scientists have done their work on these issues; it’s now in the hands of writers and journalists to share that progress.”

Gard-Murray says, “Investment opportunities in renewable energy sources, electric vehicles, and home-heating sources, for example, are becoming more profitable. Car companies are investing in electric vehicles and renewables are getting cheaper and cheaper.” With hopes that coalitions develop around these economic benefits, Gard-Murray believes that resources like the Climate Opportunity Map can effectively communicate the near-term material benefits that can come from climate action.