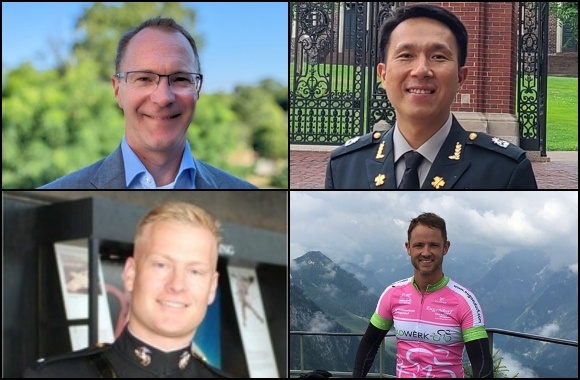 The Watson Institute recently welcomed the latest cohort of officers to its Military Fellows Program. Like their predecessors, the four fellows will spend the academic year taking courses, doing research, and attending lectures and seminars. They’ll also be available to teach and/or guest lecture in courses relevant to their areas of expertise.

Established in 2019 with a grant from the Carnegie Corporation of New York, Watson’s Military Fellows Program is directed by Senior Fellow in International and Public Affairs Dave Polatty.

“We are thrilled to be welcoming this second cohort of fellows to Watson and to see the evolution of their engagement with the Brown community on topics that are critical to humanity,” Polatty says. “We learned so much from last year’s group on how to have meaningful dialogue and also take part in important research efforts, and the knowledge and experiences of these officers is going to be appreciated and welcomed by students, faculty, postdocs, and staff alike.”

Major Trevor Tingle, a CH-53E helicopter pilot who has been in the U.S. Marine Corps for 15 years, was on a ship somewhere in the South Pacific when he learned he was accepted into the program. Though he hasn’t been in a college setting in many years, he says, he’s excited and eager to take advantage of Brown’s “high-caliber” faculty and students—not just for his own edification, but for his fellow Marines as well.

In addition to sharing his own experiences with the Brown community, Tingle says he plans to “immerse myself and absorb as much information as I can, and then take that back to my peers. By sharing what I learn with the Marine Corps, I hope to provide a perspective that they've never seen before, and that will make us better.”

U.S. Air Force Lt. Col. Jonathan Bott shares that approach to the program. “I'm here to not only learn myself, but also try to provide a perspective to make discussions richer,” he says. “And I'll do that in any realm possible, whether it be over coffee or in a classroom.”

An F-15E Strike Eagle weapon systems officer, Bott has also served as commander of a fighter squadron and, in 2021, as chief of staff for Operation Allies Welcome, the federal government’s effort to support vulnerable Afghans as they resettled in the United States after being evacuated from Afghanistan. In that role, he was responsible for setting up a camp within 72 hours in New Mexico – an experience, he says, that connects well with the work of Watson’s Center for Human Rights and Humanitarian Studies.

Major Jake Lunsford, a U.S. Marine for the past 18 years, also believes that the two communities that don’t traditionally have a lot of exposure to each other – the academy and the military – have much to learn from each other.

“I want people at Brown to know that the military fellows have been doing the things they do because of voting patterns,” he says. “The things that have gone on overseas can all be traced back to some vote, somewhere, for somebody. You don't get to send people to war if you weren't voted into office, either directly or indirectly.”

Conversely, he adds, “This is an opportunity for members of the military, who spend their time looking outward at the world, to look inward – not at themselves but at their country – and to see the struggles in American society and where they fit into that.”

Ever since he read about the Watson Institute on the Republic of Korea Army e-bulletin board last year, Major(P) Heeshik Yang has “had a dream of coming to Watson.” Like Tingle, he is looking forward to taking Jost’s Chinese Foreign Policy course.

Yang also plans to study U.S.-R.O.K. military relations. “When the Korean War broke out in 1950, members of the United Nations, including the United States, helped my country by defending our liberties. After the war ended in 1953, a mutual defense treaty was signed between the Republic of Korea and the United States. This alliance is very important to the R.O.K.’s security strategy. When I return to the R.O.K., I will share what I have learned. In the military, I want to serve as an expert on combined operations between our two countries.”

Lunsford, who plans to be a writer after he finishes his service with the Marine Corps, has a keen interest in public policy, and last year completed Watson’s MPA program. “Understanding the way policy works will make me more effective if I want to communicate about a policy. If I don't understand what I'm writing about, how am I going to write about it?” he says.

As an MPA student, he took a class called Environmental Policy Process, taught by Amanda Lynch, founding director of the Institute at Brown for Environment and Society. The class had a strong impact on him. “Climate change is going to affect national security in a big way, and I am now researching the ways in which the climate and arctic navigability affect global security agreements,” he says.

Exchanging experiences and perspectives lies at the heart of the Military Fellows Program.

“We're all smarter together than any of us alone,” says Bott, “by which I mean that none of us has the best right answer. The Hegelian dialectic says that someone presents a thesis, and someone else presents an antithesis, and out of that conversation comes synthesis. And that synthesis is a higher level of understanding than the perspective that either of us brought to the table in the first place.”