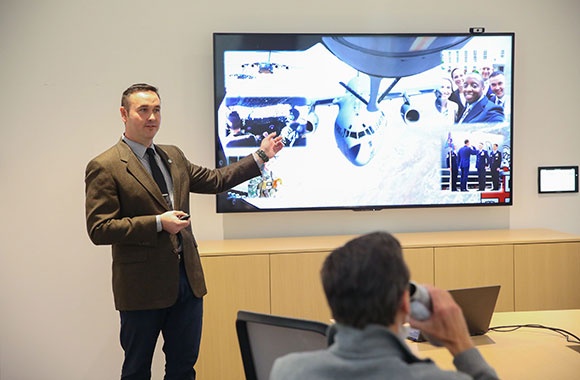 In its second year, Military Fellows program continues to bridge the civilian-military divide

The Watson Institute’s expanding Military Fellows program brings U.S. and international defense professionals to Brown for a year of courses, seminars and problem-solving conversations with policymakers and researchers.

Shanks never doubted that his work made a positive impact in the world. Still, he longed to effect even more change by helping to address his employer’s large carbon footprint: According to Brown University’s Costs of War project, the U.S. Department of Defense is the world’s single largest institutional emitter of carbon dioxide and greenhouse gases.

It was time, Shanks decided, to go back to school.

“The DOD takes the education and broadening of their members, and especially their leaders, very seriously,” Shanks said. “Despite this, there are precious few chances to meaningfully engage with academic communities from outside the defense sphere.”

One of those precious few is the Military Fellows program, housed at Brown University’s Watson Institute for International and Public Affairs. Established in 2019 with funding from a Carnegie Corporation grant, the fellows program welcomes a handful of U.S. and international military officers to College Hill each year. Throughout the fall and spring semesters, the fellows audit graduate-level courses on international and public affairs topics, engage in security-related seminars, and participate in a security-focused working group with faculty, students and policy practitioners. Some also serve as guest lecturers for courses at the Watson Institute.

As a member of the inaugural cohort of fellows, Shanks spent the 2021-22 year on campus, teaching, guest lecturing and taking part in organized and spur-of-the-moment conversations that he said made him a better leader, strategist, instructor and student. He served as a fellow alongside Hongkyu Kim, a Republic of Korea Army engineer officer.

“The Military Fellows program gives professional military officers like me the ability to not only share their knowledge and experience — via teaching, guest lecturing and engagements — but to also learn from the great minds at Brown,” Shanks said. “It fosters dialogue and engagement between the academic community and their defense and policy counterparts. Not only is this vital for sharing experience and perspectives, but it positively benefits both the Military Fellows and Brown faculty, students and staff.”