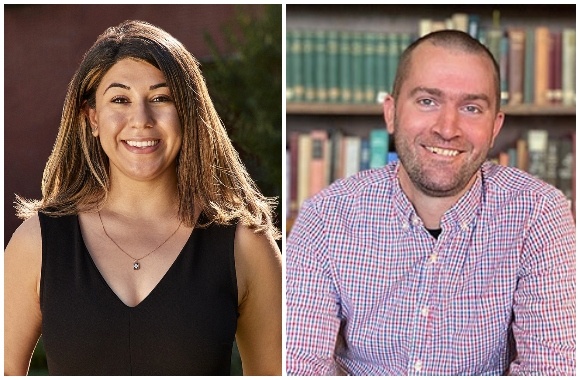 “This program gives you the time you need to move the needle forward on the work you’ve invested so much in.”

Watson’s postdocs take full advantage of many resources, including the time to write.

For top young scholars in the social sciences, the Watson Postdoctoral Fellows Program offers a supportive, diverse intellectual community and valuable teaching experience. It also affords them two years’ worth of an almost priceless resource: time.

“I am very grateful to have had the time and support to focus on writing this year,” says sociologist and refugee scholar Rawan Arar, one of last year’s eight postdocs.

Arar, who started in 2018 and left to teach for two years at the University of Washington (where she is an assistant professor in the Department of Law, Societies, and Justice), returned to Watson last fall to begin her second year “very motivated to focus” on her book project.

“Writing time is not an hour. It’s many hours back-to-back,” she says. “This program gives you the time you need to move the needle forward on the work you’ve invested so much in.”

This spring, she and co-author David Scott FitzGerald completed their book manuscript. Their book, The Refugee System: A Sociological Approach (to be published by Polity in September 2022), frames refugee displacement as a global system built on deep inequalities in which policies, laws, movements, and other forces shape states’ responses over time and across regions.

Established in 2014, Watson’s postdoc program supports the research of rising social scientists working in Watson’s three core areas: development, governance, and security. While fostering interdisciplinary scholarship, the program provides opportunities for scholars from a variety of fields to present their works in progress to colleagues, and to teach a course related to their field of expertise.

Before coming to Watson, Gabriel Koehler-Derrick, whose research covers state building, economic development, and the politics of religion in the Middle East and North Africa, kicked off his experience in the classroom at the United States Military Academy. At West Point, he says, good teaching is “incredibly valued.” There he got to “watch firsthand a bunch of really, really great teachers,” an experience he found inspiring.

Teaching Brown students was equally stimulating, he adds. One day during his course, “Colonization and Decolonization in Comparative Perspective,” he recalls putting forward “kind of provocatively” a standard argument that were it not for the investment on the part of colonial powers, infrastructure—in particular, transportation infrastructure—would be inferior in former colonies to what it is today.

That sparked a lively and thoughtful back-and-forth with the students, he says, “in which we talked about how this claim has several baked-in assumptions: that independent governments wouldn't have invested in infrastructure, or couldn't have developed the technical expertise to build these projects themselves, or that these projects were somehow optimal, when we know in many cases that the way infrastructure was configured under colonial governance was often very much with the interest of colonial elites in mind.”

That classroom discussion was, Koehler-Derrick says, “one of these moments that I'm sure I'll hold with me and think about whenever I think about Watson and Brown.”

In her course “Seeking Refuge” (which is based on her book with FitzGerald), Arar wanted not only to teach the content, but also to give her students the opportunity to hone another important skill: writing. Students wrote several drafts on their chosen topic, received formal instruction from the Writing Center, and presented their final papers in the Joukowsky Forum. Arar had the presentations recorded “so my students could share with friends and families what they’ve accomplished.”

Watson lets postdocs design their courses, which means “I got to teach a class close to my expertise and passion, and on top of that, I got to teach my forthcoming book, which I was so excited to share with my students,” Arar says.

It’s not just students who need to sharpen their writing skills. Koehler-Derrick says that Work in Progress, the component of the program in which each postdoc presents his or her current project to other postdocs and members of the Watson faculty, was valuable for him, too.

“In a PhD program, you're not really taught how to write a dissertation, much less how to turn a dissertation into a book,” he says. “There's a lot of trial and error. It was super helpful to be able to interact with all the great postdocs at Watson, to bounce ideas off them and to learn from their own experiences.”

For Arar, the value of Work in Progress lay in having a deadline and in getting important feedback from a range of scholars whose expertise and methods differed from her own, including Watson’s Military Fellows. “Because you've developed friendships with these people, it's an environment in which you can be vulnerable. They're trying to help you improve your work, and you're trying to help them too,” she says.

Koehler-Derrick, who, like Arar, has completed the program, is now an assistant professor in the Division of Social Sciences at NYU Abu Dhabi. He stresses how much his work has been enriched by interaction with colleagues and students.

“So much of our job is driven in some ways by serendipity, those conversations that aren't planned, where you get to know a little bit more about a colleague's research that overlaps with yours in ways that you wouldn't have anticipated. Or when a student asks a question that pushes your thinking on your own research in a new direction,” he says.

Asked what she’ll miss most about the program, Arar says, “That’s easy. The people.”