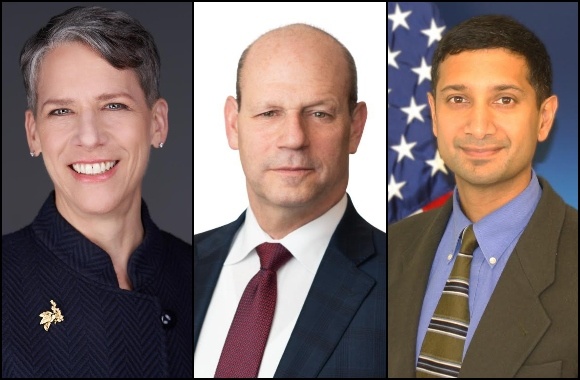 “The acceleration of knowledge is profound, and the urgency of ‘now’ feels even more substantial.”

With the study groups offered through Watson’s Senior Fellows program, Brown students can learn from practitioners in their field whose insights and expertise derive from decades of senior-level positions in government and the private sector. This fall, the Watson Institute welcomes former Ambassador Suzan (Suzi) LeVine ’93, Leon Rodriguez ’84, and Dr. Arun Seraphin.

Given these experts’ recognition that systemic change takes time, “persistence” might be the underlying theme that students should recognize from this fall’s study groups. As Levine notes in the curriculum for The Power of the States, “Those decisions and pieces of legislation [on abortion, voting rights, marijuana legalization, etc.] didn’t just magically appear and weren’t ‘overnight successes.’’ In sharing the wisdom she’s gained from many years leading global government, corporate and nonprofit entities, LeVine will guide students to understand that building their power and having impact often requires partnerships, frequently with those from a different political persuasion, and stakeholder engagements.

“Students today are smarter [than we were]. The acceleration of knowledge between then and now is profound; they have access to more information and resources, and the urgency of ‘now’ feels even more substantial,” says LeVine. The study group will engage students in recognizing “the difference between what happens at the state government and the federal government and how they – as citizens, civil servants, lawyers, citizen activists or elected officials – could have an impact on their lives and the lives of others.”

LeVine will approach her teaching and guest speakers’ presentations from a nonpartisan angle. By reverse engineering case studies – marriage equality, paid family and medical leave, and gun violence prevention, she will explain how advocates and legislators accomplished those initiatives on a state-by-state basis. “I have gained an appreciation for how to have impact at scale,” says LeVine. “I’m excited to share that with students to accelerate their access to impact.”

After decades of experience in civil rights issues, Rodriguez, too, adopts a long view when addressing complex issues. “Successes don’t come quickly; you need to be prepared for years of effort and disappointments, and successes that aren’t durable,” he acknowledges. Nevertheless, his study group, Humanitarian Considerations in Immigration Systems: Status Quo and Imagined Future, will empower students to envision a viable and humane immigration system and to plan an advocacy strategy to turn some elements of their vision into public policy.

His mid-career service as Director of the U.S. Citizenship and Immigration Services under President Obama led “to my consuming passion for immigration,” says Rodriguez. “My grandfather’s volunteer service with Hebrew Immigrant Aid Society [HIAS is a global refugee resettlement organization] helping European refugees in the ‘40s and individuals seeking to leave Cuba in the ‘60s, was very inspiring to me and remains so in my thinking about immigration.” Rodriguez is a partner with Seyfarth Shaw, LLP, and serves as an HIAS board member.

Rodriguez believes today’s college students are socially conscientious, questioning, and open to addressing problems in new and sometimes surprising ways. By inviting two guest speakers holding disparate perspectives, Rodriguez hopes students will develop a deeper understanding of people who hold opinions and beliefs different from their own. Students will analyze the current state of U.S. and foreign immigration systems, the role of humanitarian immigration pathways in addressing world crises, and the drivers of U.S. immigration policy.

“I want to explore why so many Americans are neutral on immigration issues. We’re OK with the status quo, even with all the dysfunctionality,” says Rodriguez. “Tackling the ‘why’ of that neutrality is [an important goal for me].”

When faced with daunting and complex problems, Dr. Arun Seraphin says, “It’s easy to say ‘Nothing can get done.’ But things do get done. What’s the strategy if you want to fix a problem?” Through his study group, National Security Innovation and the Congress, he will push  students to evaluate how they – as Capitol Hill, Pentagon or private sector employees – would resolve a problem. “You can find your way through the maze to get things done… [but] be realistic about how quickly things happen.”

Now Deputy Director of the Emerging Technology Institute at the National Defense Industrial Association, Dr. Seraphin will share what he’s learned from senior positions in the private sector, in the Obama administration, and on the Senate Committee on Armed Services, where he worked closely with Senator Jack Reed (D-RI).

Diverse institutions, such as defense contractors, research institutes, and universities, regularly advocate that the military adopt their preferred technological innovations as essential national security tools. Dr. Seraphin, along with invited guest speakers, will speak to the challenges the military faces in adopting and implementing specific national security tools, the role that Congress plays in appropriating funds from the national budget to the military to purchase innovations, and how the activities of various advocacy groups impact congressional decision-making.

“The Pentagon is very tradition-bound and very well-funded, yet no one would argue that it’s the most efficient,” says Dr. Seraphin, asserting that policy, culture, and funding all impact the military’s innovation and governance.

Throughout his career, Dr. Seraphin has witnessed Brown professors doing military-related policy research, and Brown alumni and graduate students engaged in the field. He looks forward to interacting with students to provide insights into Washington, DC, encouraging them to gain policy experience, and “becoming part of Brown’s research and policy community.”