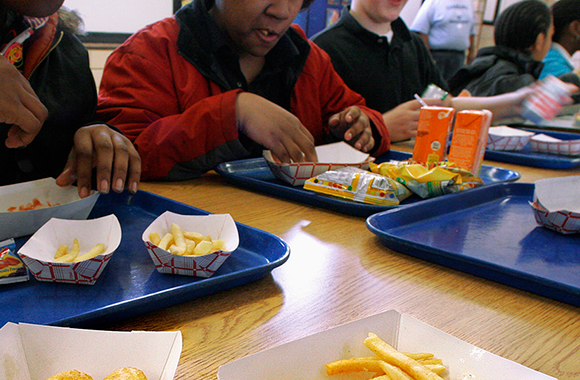 “Having conversations that cross both disciplinary boundaries as well as policy sector boundaries is key to making the social safety net less administratively burdened and more equitable, progressive, and accountable,”

On May 6, a group of sociologists, political scientists, economists, and public policy experts from universities across the country took part in a day-long workshop titled “Reconstructing the Social Safety Net: Overlapping Public Investments in Child Well-Being.”

The conference was convened by an interdisciplinary group of Brown faculty led by Director of the Annenberg Institute Susanna Loeb; Director of the Watson Institute's Master of Public Affairs Program Susan Moffitt; and sociologist Margot Jackson. In it, 35 participants workshopped their current research on a number of social welfare-related topics. The 10 original papers shared will eventually be published as a special issue of The ANNALS, the periodical published by the American Academy of Political and Social Science.

While positive effects of public benefit programs on children’s health and academics have been well established, these interdisciplinary scholars are combining their research to better understand how overlapping programs actually interact, to what extent they are accessed by families—and how they can be improved.

The American social safety net is “skimpy, holey, sticky, inequitable,” according to Moffitt.

Indeed, one paper at the workshop shows that administrative burdens stemming from lack of information, difficulty in complying with program rules, and stigma, might account for the fact that between 20 and 50 percent of families don’t receive the benefits they’re eligible for.

Another paper, by co-organizer Margot Jackson, a sociologist at Brown and an expert in poverty and inequality among U.S. children and families, makes clear that individuals who are more privileged, whether in terms of education level, race, or ethnicity, are more likely to receive more and better bundles of benefits, while the most vulnerable are the least able to access those bundles.

Still another explores lessons learned from older models of bundling services in the 1980s, and looks at how providing too many services in a “one-stop-shop” location – combining early childhood education, housing assistance, and GED for adults, for example – hasn’t always produced the assumed multiplier effects. Administratively, such places can be “crushed under their own weight,” says Moffitt.

Loeb joined Jackson and Moffitt in convening the workshop and moderating the panels. Her research agenda places public schools at the heart of the social safety net; she also studies the intersection of public education and nutrition, and works closely with colleagues in the School of Public Health to forge greater connections between public schools and public health providers.

“This event has been brewing for a decade,” Moffitt says. Ten years ago, she and Jackson met as postdoctoral fellows at the Spencer Foundation, which supports research in education, and discovered they were asking similar questions from different points of view.

“So much of the work on education focuses on what happens inside schools,” Moffitt says. “But Margot and I situate schools in a broader political and social context.”

In 2018, more than a half-century after the 1966 publication of Equality of Educational Opportunity – the study better known as the Coleman Report, which identified massively unequal academic achievements among public-school-educated children – Jackson and Moffitt organized the “Coleman at 50” workshop at Watson. The research presented was also published in The ANNALS.

That’s important, Moffit says, because the publication is adept at “moving academic research into applied public policy spaces.” Some of the scholars who attended were invited to Washington, DC, where they participated in a briefing attended by Congressional staffers and members of the media.

This year, the pandemic provided a “kick-start” for another workshop, Moffitt says.

“COVID-19 revealed significant problems in delivery of benefits and services by an overloaded and under-resourced administrative apparatus, while also revealing some promising paths forward for certain kinds of tax credits,” she says.

Jackson agrees: “The tremendous need for a social safety net during the COVID-19 pandemic has launched a renewed policy focus on the importance of comprehensive public investments in children, as we see with the dramatic – yet unfortunately temporary – expansions of the Child Tax Credit, food assistance, and Medicaid programs.”

Yet another paper discussed at the conference shows how increased support (through the expanded federal Child Tax Credit and state-level efforts that build on it) has improved family and child well-being. The paper points out that these efforts moved more than 3 million children out of poverty while they were in place, and if continued could reduce the annual child poverty rate by more than 40 percent.

“Having conversations that cross both disciplinary boundaries as well as policy sector boundaries is key to making the social safety net less administratively burdened and more equitable, progressive, and accountable,” says Moffitt. She looks forward to a future workshop, one with policymakers, that asks, Where do we go from here?

The conference was organized with generous support from the Annenberg Institute for School Reform, the Watson Institute for International and Public Affairs, and Brown’s Population Studies and Training Center.