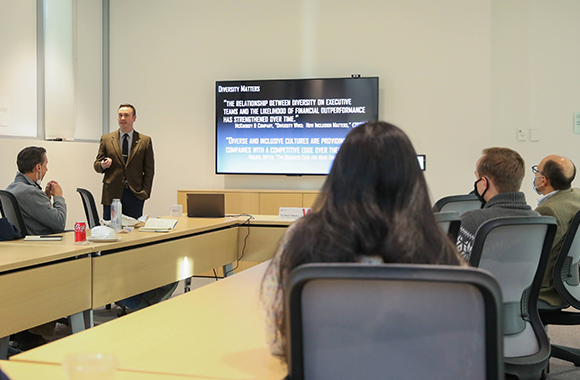 Through classes, research, and cross-campus engagements, military fellows bring a fresh perspective to the Brown community and beyond.

Established in 2019 with a grant from the Carnegie Corporation of New York, Watson’s Military Fellows Program brings U.S. and international military officers to the Institute. For one year, fellows participate in security-related research, seminars, classes, and public events alongside Watson’s faculty, students, and policy practitioners.

For Theodore “Doc” Shanks, an officer and command pilot in the U.S. Air Force, acceptance into the program came as great news: his research examines the Air Force’s role in climate change, and at Watson, he’d be able to work closely with members of both the Costs of War Project and the Climate Solutions Lab.

“Getting to engage with Jeff Colgan and Neta Crawford” – directors of the CSL and Costs of War, respectively – “as well as with faculty in the Institute at Brown for the Environment and Society, has been absolutely phenomenal,” he says.

Shanks focuses on the Air Force’s contributions to global CO2 emissions and greenhouse gases: how do those translate into national security threats? How do we mitigate those threats? How can we reduce CO2 emissions? The CSL and Costs of War, he says, have done a lot of that “root research” already. “It’s amazing to be able to use their work as a platform to continue—and then, as an active duty military member, to bring my work back to the Pentagon and translate it into ways of doing better.”

But it’s not a one-way street, Shanks points out: “One of the most satisfying parts of my research so far has been to serve as a bridge to the Pentagon, which is a big, sprawling bureaucracy. One of my mentors happens to have been the former director of the Defense Logistics Agency - Energy (DLA-E). One of my research goals is to connect DLA-E experts with other climate change researchers, sharing open-source information that might ordinarily be difficult to find in the Pentagon’s bureaucratic maze.”

Shanks and the other fellows also engage with the Brown community in the classroom. Last semester Shanks audited a course taught by Adam Levine, MD, director of the Center for Human Rights and Humanitarian Studies. He was amazed to realize that both he and Levine had responded to disasters in Haiti, Liberia, and Pakistan at the same time – but in very different ways. It was eye-opening, he says, to encounter the humanitarian perspective of the disaster relief he had provided using a military approach.

“We were in our insular Department of Defense bubble in a lot of these places,” Shanks says. “For me to be able to share my perspective with Adam and for him to share his with me was so valuable. It's given me a unique perspective that I think a lot of my peers aren't lucky enough to get.” The class was not without its moments of “low-grade friction” between humanitarian and military points of view, he adds, but even that was helpful in raising his “bias awareness.”

Such uncomfortable moments are just one example of what Dave Polatty, the program’s director, celebrates as “hard discussions led through healthy, productive, respectful dialogue” between the fellows and students and faculty at Watson.

“One purpose of this program is to have people here that can speak honestly and openly about things that militaries do,” he says, adding that because of their openness, the three fellows make great “ambassadors” for the military. “As the program grows in the years ahead and we have more fellows from the other military services, we hope that it offers increased opportunities for the Brown community to engage with well respected military leaders.”

Last November, the fellows participated in Brown’s commemoration of Veterans Day. The well-attended ceremony, which drew more than 100 people, reflects the rise in the military-affiliated population at Brown: 79 student veterans and 36 ROTC members. At a lunch hosted by President Paxson, the military fellows got to speak with Sen. Jack Reed, a U.S. Army veteran and chairman of the U.S. Senate Committee on Armed Services.

The Military Fellows program also launched a seminar series. Last fall, Shanks delivered a lecture on diversity in the U.S. Air Force and this spring will offer a follow-up, delving into a recent USAF diversity review focused on justice and disciplinary data; he will also present his climate research. Hongkyu Kim, an officer in the Republic of Korea Army presented a seminar on the historical military alliance between the U.S. and the Republic of Korea from 1866 to 2021.

Kim, who was called back to Korea to take command of a battalion, is enthusiastic about his experience as a fellow. “I learned tremendous things from Brown. But the most valuable thing I got is understanding diversity,” he says. “When I started, I had high expectations that I would broaden my knowledge of international politics and the US government. This program helped me a lot in understanding those things, but above all I have grown in leadership through interacting with people from different origins and backgrounds.”

Jake Lunsford, an officer in the U.S. Marine Corps, will spend two years at Watson, currently as an MPA student, and next year as a military fellow. He says the MPA program has been “a quality learning experience. I have learned as much from the other students as from the professors. I very much appreciate the open and welcoming classroom environment.”

Lunsford is looking forward to his year as a fellow, too, which he sees as a unique opportunity to get perspectives he isn’t exposed to enough: “Learning about, and from, those we serve is a unique and gratifying experience,” he says. But he adds that his experience has been gratifying in other ways, as well.

“I walk through the main green each day and feel incredibly lucky. I am a military officer, yes, but I am also a first generation college student, at both the undergraduate and graduate level, and to be at Brown University is not something that I would have ever imagined for myself or my family,” Lunsford says. “To be so welcomed and to have such an opportunity for education and experience is a boon and a blessing.”