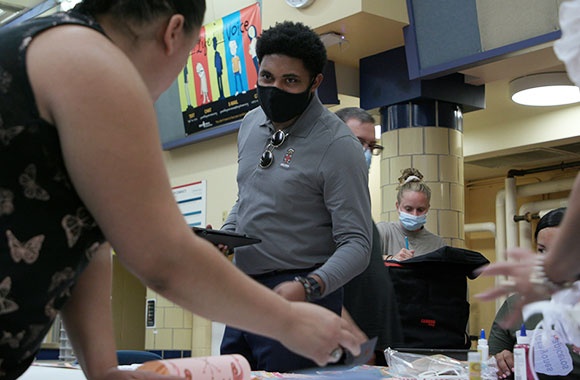 “We knew this would offer us a really exciting opportunity to explore the extent to which democratic innovation strategies are useful in improving the school experience, particularly for students in communities of color.”

Students and their parents in Central Falls, RI were empowered – through Voces Con Poder (Voices with Power) – to decide how certain Covid-relief funds could benefit their local schools. The Central Falls’ school district leadership recruited Jonathan Collins, assistant professor of Education and International and Public Affairs, and his team of research assistants to develop and administer surveys, to observe and engage with participants, and to create a longitudinal study for tracking long-term civic participation.

The summer-long process did far more than simply allow students and parents to choose where funds could be directed, it also changed participants’ perspectives of the local power landscape. “That’s key to having long-term civic participation; individuals must believe that people in their same position have the power to improve and change conditions,” says Collins. “We knew this would offer us a really exciting opportunity to explore the extent to which democratic innovation strategies are useful in improving the school experience, particularly for students in communities of color.”

What is participatory budgeting?

The Central Falls School District designated $100,000 of Covid-relief funds (Elementary and Secondary School Emergency Relief Funding) to the participatory budgeting process, which invited every community member to submit their ideas to improve the local schools. (The year before, the school district had allocated $10,000 to a smaller-scale participatory budget process.)

Collins and his team collected some 125 idea surveys in June 2021, which generated 240 ideas. Then, approximately three dozen residents – students (fifth graders and older) and parents – were chosen as delegates. The delegates met twice a week for eight weeks and were tasked with curating and evaluating the submitted ideas, and developing ideas that met specific criteria (urgency, feasibility, durability, and funding eligibility) into nine structured proposals, which students and parents later voted on.

For their participation, delegates received stipends and meals; and Spanish translators were available at every meeting. Central Falls’ administrators, says Collins, “were so thoughtful about being accommodating, and that enabled participation to be much easier.”

In August 2021, 146 parents and students turned out to vote – in a middle school gym lacking air-conditioning during Rhode Island’s hottest day then on record. The winning ideas focused on after-school extra-curricular programs and an app to improve communications among students, parents, and faculty/staff about school safety concerns. Central Falls’ school administration vowed to provide additional funding to support these initiatives.

Collins and his team – Janelle Haire, M.A. '21; Emma Miller, M.A. '21; Gabriel Mernoff ‘22; Camila Echavarria ‘24; and Matthew Lioe '24 – constructed a research design to demonstrate the impact of the participatory budgeting process and how it could set the stage for the future. They surveyed delegates before and after their participation to evaluate a series of factors, says Mernoff. “They were asked: ‘Did you have a vote in your community? Would you want to attend community meetings? Would you go to school board meetings?’”

Survey results were promising, as the team found a significant increase in participants’ drive to participate in civic activities, after they participated in the budgeting process. “Participatory budgeting is as much about the process as it is about the outcome,” says Mernoff. Through the experience, “people feel that they have a voice.”

The traditional funding model – where school board meetings invite public comment – lacks additional opportunities for civic engagement, says Collins, who believes that participatory budgeting, in contrast, can lead to some of the nation’s most vibrant democratic activity.

While the results of those short-term evaluations are promising, Collins and his team will conduct an annual longitudinal study to ask delegates to identify their level of political and civic engagement. “Not only has the propensity for engagement increased, delegates’ perceptions of power have changed,” says Collins. Before their participation as delegates, individuals were much more likely to view the business community and wealthy individuals as extremely powerful; afterward, they were more likely to see community, youth, and student groups as having more agency.

Despite the current environment – in which political and media elites emphasize divisiveness and partisan politics – Mernoff believes democracy works. “I believe people want to work together, but sometimes institutional barriers get in the way. Participatory budgeting … can channel people’s good instincts to make communities better, as opposed to obstructive disincentives that keep people at odds with one another.”

In interviewing delegates throughout the project evaluation process, Collins observed collegial, rather than competitive attitudes among delegate groups, who worked on different proposals. “There was a unanimous feeling among the delegates that they were happy to be part of the process to make the school district better and as long as a project got funded, they’d be satisfied,” Collins says. “There was no sense of a zero sum game.”

While the system isn’t perfect, Mernoff notes that the process succeeded, even in the midst of a pandemic, with students and parents from marginalized backgrounds. “The process is one of the most promising and under-utilized tools we have at a time when people are worried about the strength of democracy,” says Mernoff. “It’s an opportunity to increase faith in democracy… and the participatory budgeting process is applicable to issues beyond education.”

To learn more about Voces Con Poder and the work of Professor Collins and the PAVED Research team visit: pavedresarch.com