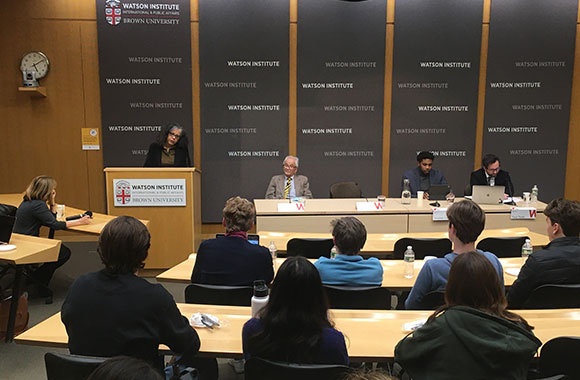 Six takeaways from the 2022 midterm elections, according to Brown political experts

In some years, particularly in generations past, midterm elections haven proven less than memorable. But 2022 was far from a snooze, said Katherine Tate, a professor of political science at Brown University.

Across many states, Democrats came to the polls in droves to reject measures that would have curbed abortion rights. Several far-right Republican candidates won seats in the House of Representatives by stoking fear of voting fraud in the hearts of their constituents. And in Georgia and Pennsylvania, where some races are still too close to call, voters appear to have shattered midterm turnout records.

“Now we have these super consequential elections we’re all motivated to vote [in], because parties are so different today than they used to be,” Tate said.

Tate was one of four Brown faculty members who weighed in on the results of the midterm elections at a Wednesday, Nov. 9, panel discussion hosted by the Taubman Center for American Politics and Policy. The event, held at the Watson Institute for International and Public Affairs, drew dozens of students and community members from the Providence area. Wendy Schiller, director of the Taubman Center, moderated.

Despite the fact that a number of key races remained undecided, there was plenty for the experts to unpack — including how the polls held up, why Republicans didn’t see the “red wave” they predicted and what the results could portend for the 2024 presidential election. Below are six key takeaways from the conversation.

In 1992, Bill Clinton used the mantra “it’s the economy, stupid” to wrest control of the country from George H. W. Bush amid a recession. The phrase has been considered a universal truth since: When unemployment numbers are low and the gross domestic product is up, it’s tougher for challengers to unseat the party in power. If, on the other hand, unemployment is high and the GDP is struggling, voters are more apt to favor changes.

Yet, Collins noted, that logic didn’t appear to hold in the 2022 midterms. The GDP is on a steady incline. Unemployment hovers below 4%. And the U.S. added 250,000 jobs in the last quarter.

“By traditional indicators, [the economy] is relatively strong,” Collins said. “But… does it feel as the indicator suggests? You have what people are experiencing: Higher costs for everything. Sky-high interest rates that form a wall for anyone who needs a loan. Almost everyone has a job, but no one can afford to buy anything.”