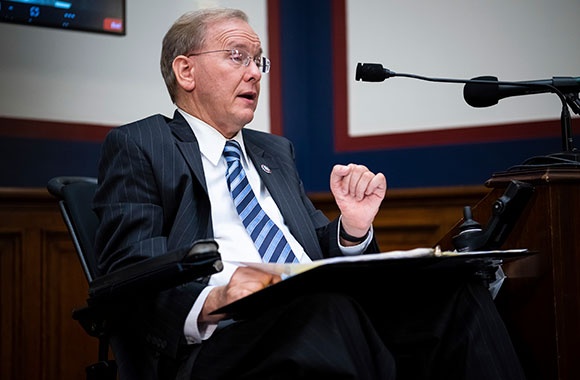 After serving as a U.S. Representative for Rhode Island’s Second Congressional District for 11 terms, James Langevin retired from the House in 2023. Now living full-time in Rhode Island, Langevin has been named a senior fellow at the Watson Institute for International and Public Affairs.

The founder and former chair of the House Cybersecurity Caucus, Langevin will lead an undergraduate study group, “Surveying the Cyber Threat Landscape and Protecting the United States Against Cyberattacks of Significant Consequence” this spring. The five-week study group will focus on the current threat landscape; how the federal and state governments are structured to respond to threats; what policies can strengthen our cyber-eco system; an examination of the public-private partnerships to address critical infrastructure systems; and an evaluation of how to engage internationally to strengthen cyber security. Langevin notes that the final part of the course will look to the future: “Where do we go from here? What’s left to be done?” Along with leading the study group, Langevin will hold office hours and at least one special event this semester, as well.

“All of us at Watson feel deeply honored to have Congressman Langevin join our academic community as a senior fellow,” Watson Institute Director Edward Steinfeld said, in announcing Langevin’s appointment. “Throughout his 22 years in Congress, Jim Langevin has demonstrated exceptional leadership in policy areas ranging from health care and the environment to current challenges surrounding cybersecurity.  What a privilege for us all to have the opportunity to learn from such an exemplary civil servant and policy leader.”

In addition to serving as a senior fellow at Watson, Langevin will be a visiting scholar in the Political Science Department at the University of Rhode Island for the spring and fall semester of 2023. In that capacity, he will host a symposium on national security or U.S. democracy each semester, attend selected events, and maintain an office on the Kingston campus.

“I hope to give students unique insight into my experiences with more than three decades in government service,” said Langevin. “I’ve learned in my [academic] training and in government experience that public policy making is not always easy or quick, and sometimes the government moves too slowly. Three main elements – having a problem, having a solution and having a window of opportunity to enact a policy – must be present; while they don’t always line up quickly or easily, but when they do, one must be ready to push your initiative across the finish line.”

Paralyzed since he was 16, Langevin determined that weekly travel and living in two places at the same time for so many years had become an unwelcome obstacle. “It’s a challenging life; I had to travel with an assistant and a certified nursing assistant,” he said. “I’m hoping now to do something that keeps me closer to home and offers a better work-life balance.” During his 22 years in Congress, Langevin focused on national security, cybersecurity and expanding access to health care, along with reducing barriers for those with disabilities. “We all face challenges in life; with the right help and determination, we have the ability to overcome them,” said Langevin, who presided over the House as speaker pro tem on the 20th anniversary of the signing of the Americans with Disabilities Act.

Before running for Congress in 2000, he also served Rhode Island as a member of the General Assembly and Secretary of State. Langevin earned a BA from Rhode Island College and an MPA from Harvard University.

“I want to thank the people of Rhode Island who rallied around me; I hope I gave good public service to the people here,” Langevin said. “I hope I helped to make government work for people in the way it should – by being responsive to people’s needs and concerns.”

From Congress to the classroom, here's what's next for Jim Langevin - The Providence Journal