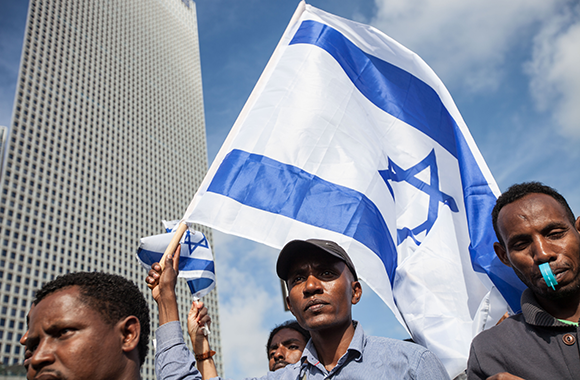 Yes. I think that in Israel one of the major issues is police accountability, especially where police violence is concerned. Minority groups--namely Ethiopians and Arab citizens--have the view that they suffer from police violence and that there is no accountability, no measures taken to punish and prevent future abuses. There is a very strong criticism of investigations of police misconduct. Actually, the head of the police investigation department, which is affiliated with the Justice Department, has just resigned, hinting at his frustrations with the process.

But, like elsewhere, the way the police is structured does not allow much accountability. Police tend to develop an us-them mentality, resisting efforts to oversee their work. In Israel, as in many other countries in recent years, the securitization of many of the issues the police engages with, and the rendering of minorities suspects, limits even more the willingness to investigate police. Under these circumstances, it is difficult to see change coming in soon.

If we don’t expect change to come on the police side, can we expect the change to come in civilian attitudes? You mentioned the fascinating paradox that Ethiopian Israelis suffer (nearly the most police abuse) but hold some of the most favorable views of the police of any ethnic group in Israel. Are younger Ethiopians changing that dynamic?

Yes. We’re seeing that there is a very vocal and very well-spoken group of young Ethiopians who are politicizing these issues. But they're a very small minority in Israel--Ethiopians in general are a very small minority--with very limited political power. While there is some discussion in the media and social media, the political power behind that is very limited. So in that sense even though there's a change among the Ethiopians of the young generation, power-wise, there is not enough to create the pressure on the police and government to make police more accountable and responsive to minority needs and concerns.

The gap between majority and minority perceptions of police can be observed in many countries, and these perceptions are often grounded in reality. Police is often influenced by the politics and society within which it operates, and different groups receive different treatment and, accordingly, have different needs and concerns. Marginalized groups suffering from police violence and brutality will be concerned with fairness and accountability, not just performance. For majority groups, the greater concern would be police performance. Under such circumstances, when fairness is largely a minority concern, the police will be very slow to change. In general when we study politics, sympathy is often not enough to create change. You might sympathize, but that is not what will bring you out to the street or change your voting patterns.

You see it in the U.S. now. Concerns about Baltimore and Ferguson come mostly from the African-American community, in movements like Black Lives Matter. White Americans might be sympathetic and support reform, but for African-Americans it is a real threat and also an indication of wider questions of inequality. [Bill] de Blasio, the mayor of New York City, in an interview three years ago, talked about how he feels unsafe for his African-American son if he encounters police. He was strongly criticized by the New York police and other fellow Americans for saying that. But if the mayor of New York has such concerns about his son, it is easy to imagine how it is for ordinary African-American citizens.

You also mentioned that local Arab mayors are more willing to cooperate with the police than Arab politicians on the national level. Why is that the case?

Arab mayors have a different discourse than we hear from politicians on the national level, who talk about national identity and the need to stay separate from the state, which they see as oppressive. Arab mayors may share these views, but they also have to deal with everyday problems of security and high levels of violence. Cooperating with the police is a necessity, since no one can replace the police. Without police, schools are unsafe and streets are unsafe, which has an effect on the economy and the quality of life. So they’re making clear that they expect police to do their job.

But, it's not that simple. While they are calling for the police, Arab mayors also have good reasons not to trust the police, as does the Arab public. Their claim is that police uses its presence in Arab neighborhoods to make Arab citizens cooperate with the security apparatus of the state, providing them with information about people allegedly disloyal to the state. Consequently, they feel that police’s heart is not there, that they are not committed to serve and protect them as they should.

From the police perspective, which should be heard as well if you are doing research, you’ll hear they do want to make a difference. They regret the fact that they have let those towns and villages go astray and become so chaotic but they're having a hard time intervening because there is so much chaos and so little cooperation.

You hear from officers that they come in, try to do their job and they get rocks thrown at them and get no cooperation. Arab citizens, conversely, claim that when the police come in, they do all the wrong things and that's why they don't trust them. Trust is a very difficult thing to establish, and we see that in many minority communities.

Would the dynamics change if police were less heavily militarized?

Yes and no. It depends what you mean by militarized. Today, policing Arab villages will not be an easy job because the first thing they have to do is to clean those towns from illegal weapons. Those people who have those illegal weapons will not be giving them up just because we asked.

So on the one hand police do have to use force. The question is, will they use this force in a fair manner? Will they be accountable? These are the questions. So, for example, Arab citizens are very wary and very cynical toward community policing, which was introduced as police reform. From their perspective, community police officers are simply second-rate officers assigned to Arab towns. Those citizens are concerned about drug dealers and armed gangs and they’re getting officers with good intentions who educate and help kids cross the streets. That is not their top priority and does not answer their needs.

Police has to be demilitarized, but not necessarily in the sense that they have to walk without weapons like an old friendly British policeman. Rather, demilitarization is, first, about a change of attitudes, treating Arab citizens as equal citizens, not security threats. And second, about procedures, about being more accountable, open, and engaged with communities.