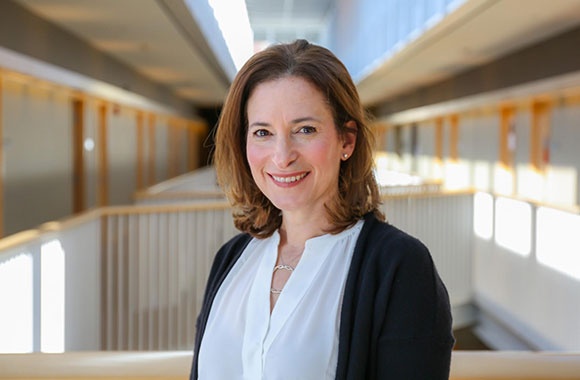 "Brown in DC is a great program. It gives students a close-up view of politics and policy in action and the opportunity to meet and interact with people at high levels in those fields."

Inside DC: Course Exposes Students to Policy in Theory and in Practice

Senior Fellow Jennifer Klein ’87 is no stranger to DC, having worked in both the Obama and Clinton administrations and on the 2016 Clinton presidential campaign. She has taught at Yale Law School and Georgetown University Law Center, and currently serves on the boards of the International Center for Research on Women, the Greenwall Foundation, and the Brown University School of Public Health. We asked her to tell us about teaching a course and mentoring students as part of the Brown in Washington program.

WI: Tell us about the course you’re teaching with Pamela Reeves ’87, also a senior fellow in international and public affairs at the Watson Institute.

JK: It’s called Formulating a New National Security Strategy: The Politics and Policies of Transnational and Cross Border Issues, which is a very long title for a relatively short course! We taught it last spring, and we’ve made some adjustments based on that experience.

WI: What does the course entail?

JK: Brown in Washington combines an internship opportunity with two courses. The other course looks at domestic issues, while ours is more foreign-policy focused. We look at the complexity of national security, particularly currently—and by currently I don't mean this administration, I mean the last 10 to 15 years – when many of the problems we face as a world really began crossing borders, such that we can’t deal with them with a traditional national security approach. Climate change, terrorism and counter-terrorism, global health – these are challenges that require a new way of looking at national security. For example, with climate, the actions to of one country to either exacerbate climate change or limit emissions have effects on every other country. Traditional military and diplomatic strategies and typical bilateral negotiations just aren’t going to solve this problem. We start the course by looking at national security strategies from recent administrations and then delve into each of the issues, treating them almost like case studies.

WI: What’s the advantage of teaching this course in Washington, DC?

Because we are not experts in all of these fields, we are able bring in guests who are national or international experts on these issues. For example, we had former United States Special Envoy for Climate Change Todd Stern come talk about climate change. We also had Ron Klain, who was the Ebola Response Coordinator in the Obama White House, talk about Ebola and global health threats. And we had David Cohen, the former deputy director to the CIA, talk about cyber security and counter terrorism.

Those are subject matter experts. Then we come at it a different way, which is to look at how different parts of the “national security apparatus,” for lack of a better word, approach these issues. So last year we had Jeffrey Goldberg, the editor-in-chief of The Atlantic, talk about the role of media in policy making and national security. This year, we’ll also have David Frum, a writer at The Atlantic, talking about his most recent work on authoritarianism.

We’ll also have somebody from the Japanese Embassy come and talk about bilateral diplomacy. We’ll go to the Smithsonian, where a former colleague of ours from the State Department runs their international affairs program. She’ll talk about why cultural exchange is an important part of diplomacy.

The last new piece is that we’ll have someone from the United Nations Foundation talk about global development and how international development is an important tool of foreign policy and national security. This was always thought of as a separate and parallel exercise, and now I think the role of development is really seen as the third leg of the stool – in addition to defense and diplomacy -- in foreign policy and national security.

WI: How did you and Pamela Reeves set out to design this course in the first place?

JK: The year before last, while I was a fellow at Yale’s Center of Global Legal Challenges, I started thinking about a course on global health, climate, and other issues that cross borders. Pamela was already teaching a class at Brown on gender and foreign policy. She and I started talking about expanding that course and then, when she found out that she was going to be teaching for Brown in Washington, we brainstormed some more and thought that this might be a really interesting course to teach for this program.

WI: Have you changed anything in your approach based on your experience last spring?

JK: We kept the theme and the topic the same, but one of the things that we did try to improve from last semester is to have a broader range of political perspectives. This semester we have several Republicans coming to talk to our class. Pamela and I both felt very strongly that we introduce the students to speakers with different views. This is also a class taught by real policy makers, and we talk a lot in the course about important it is to understand the assumptions and even biases that policy makers bring to their work.

While we don't have a focus on democracy, it ends up being infused throughout our course. We’re weaving in the notion of American values in the world, whether democracy’s being threatened, whether that's something that we should be collectively thinking about more.

WI: What do you hope your students will have learned by the end of this semester?

JK: Two things. The fact that they take two courses in addition to their internships is really important, because as you're immersing yourself in how policy is made on a daily basis, it’s really good to understand the theory behind it. So I hope that the course grounds them and helps them see how the work they're doing every day in their internships fits into a larger whole.

I also really want them to have a broad understanding of these issues. Then they can decide if they want to delve more deeply. What this course brings is that broad approach to national security strategy, through the case studies. Having the hands-on opportunity while you're in school is very useful. Because it’s based in DC, this course is a chance talk directly to people who have been in the real policy making process.

We also talk to the students about how to manage their internships and upcoming career choices, and we take seriously our responsibility to mentor them while they are here in DC.

WI: Why do you think students should apply to do this program?

Brown in DC is a great program. It gives students a close-up view of politics and policy in action and the opportunity to meet and interact with people at high levels in those fields. Even more important, it also gives them the chance to be deeply involved themselves at think tanks and advocacy organizations, in Congress, and in local DC government.