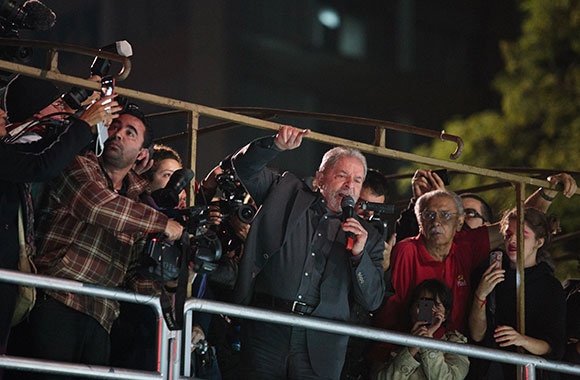 James N. Green, director of the Brazil Initiative at the Watson Institute, discusses the Supreme Court’s ruling that Luiz Inácio da Silva (“Lula”), a former two-time president of Brazil, must begin serving his 12-year prison sentence for corruption, and what Lula’s incarceration portends for the upcoming presidential elections in October.

Q: Several weeks ago, you accurately predicted that Luiz Inácio da Silva (“Lula”) would be incarcerated. Is Lula the first Brazilian president to face that punishment?

A: Yes, this is the first time that a president in Brazil has been ordered to serve a prison sentence for corruption. Other presidents have been detained – but not incarcerated – during military dictatorships. While I am not predicting a return to military power in Brazil any time soon, one very significant military leader publicly announced that the military would be upset if the Supreme Court did not uphold the lower court’s ruling requiring Lula’s imprisonment.

Q: Do you think Lula’s conviction for corruption was politically motivated or fair and just?

A: While he was convicted for receiving a very modest beach-front apartment in exchange for favors to a construction company, I am not convinced that prosecutors fully proved his ownership and legal possession of the apartment or established a quid pro quo. Federal judge Sergio Moro saw it as his mission to imprison Lula. While I’m delighted that Brazil is finally rooting out corruption – which has existed across-the-board for 500 years – it has to happen across all political parties. That’s not the case now.

Q: What does Lula’s prison sentence mean for the upcoming presidential elections?

A: He’s still potentially a candidate; the Workers’ Party may register him as a candidate for president, but under the Clean Slate law, he’ll be determined ineligible to run, because of his conviction and imprisonment. If his name remains on the ballot, every vote cast for him will be invalid.

Brazil has 32 political parties, 28 of which have representation in Congress. Given changes to the electoral system that have been implemented, I think that there will be six to eight presidential candidates; if no candidate wins a majority, there’s a run-off between the two strongest candidates.

The second most popular candidate, after Lula, is Javier Bolsonaro, a right-wing congressman, who compares himself to Donald Trump. I think his support will weaken; he is ineffectual and not a very good speaker. The center-right is extremely nervous about the strength of its candidate, Geraldo Alckmin, a conservative Catholic and governor of the state of Sao Paulo, who could, if elected guarantee their agenda. Alckmin, an uncharismatic figure who had unsuccessfully run against Lula for president, has been accused of corruption, but no charges have been filed. Joaquim Barbosa, the first black member of Brazil’s Supreme Court, is another possible candidate, from the center-left’s Brazilian Socialist Party.

Q: Talk about the drama that ensued after Lula was ordered to surrender.

A: In an effort to show his hardline attitude, Moro ordered Lula to turn himself in even before the Supreme Court ruling was officially issued and shortly before Lula was due to hold a memorial mass for his late wife, Marisa Leticia. Initially defying orders to turn himself in by Friday, April 6, Lula gave a remarkable and powerful speech on Saturday, April 7, to huge crowds surrounding him at the headquarters of his Metalworkers Union, which he led in the 1970s. Before surrendering, he asserted – as a political maneuver– that he wanted to turn himself in but his supporters wouldn’t let him leave. Huge campaigns are underway to flood police stations with letters of support for Lula.

When the press wanted to photograph Lula in handcuffs, he taunted them, asserting that he’d walk into prison with his head held high and, while he was in prison, ordinary people would continue to represent his message. He created an image of himself as a political prisoner, akin to Nelson Mandela.

Q: There is speculation that Lula, age 72, won’t serve the full 12 years of his prison term.

A: In Brazil, as in the United States, a sentence can be reduced to require an incarcerated person to serve only one-third of the original sentence, so I think Lula might serve a shorter sentence. I don’t think the Supreme Court will overturn the lower courts’ decision, but it’s possible that Brazil’s Congress or the Supreme Court might change the law to release convicted persons from prison pending their final appeal process. If that were to happen, all the corrupt individuals across the political spectrum – not only Lula – would be freed from prison.

Q: With Lula still garnering support from some 30 to 40 percent of Brazil’s population, how are different segments of Brazil’s divided population reacting to his incarceration?

A:  Those who support Lula strongly believe that this was a political persecution. He went to prison with his dignity intact and is empowering the next generation to carry out his life’s goals of favoring the poor and overcoming poverty. They believe that, if Lula was guilty of corruption, everyone guilty of the corruption that is so widespread in Brazil should be convicted.

The opposition, in contrast, is jubilant that Lula is in prison, because he represented a paradigm shift in Brazil that eroded the privileges of those in the upper middle class and elite society. Because of Lula, people without privilege now feel they have a voice and rights; since the recent assassination of Councilwoman Marielle Franco, black women activists in Brazil, for example, have become very outspoken. Those on the right are happy to close the books on other corruption investigations, and they are now demanding Brazilian President Michel Temer be investigated for corruption.

Interview with James N. Green on turmoil in Brazil ahead of presidential elections