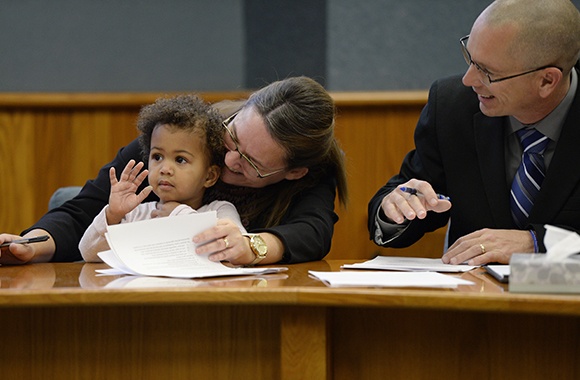 The Changing Politics of Immigration and Adoption

Jessaca Leinaweaver, a faculty fellow of International and Public Affairs and the Director of the Center for Latin American and Caribbean Studies, recently sat down for a Q&A to offer her insight into immigration and adoption.

Q: Tax credits for families who adopt children were initially cut from the tax bill (they have since been restored after much outcry). Why is supporting such families monetarily an important aspect of adoption?

International adoption can be very expensive as there are many fees, from travel costs to payments for attorneys and background checks on parents. What was interesting for observers of that debate was how it exposed a conflict within the Republican platform. On one hand, part of their pro-life stance involves supporting adoption, so the idea that they would do anything to make it more difficult to adopt seemed counter-intuitive. But the tax credit was framed as giving a big and unnecessary tax break to the middle-class families who would supposedly have adopted anyway.

In the U.S., our ideology is that family is this sort of sacred place where we don’t talk about how much things cost. It is all about love and happiness, and openly acknowledging money is distasteful within that ideology. So it was interesting to suddenly see the cost of making a family through adoption on the front page headlines.

Q: At Brown, you teach an Anthropology course on the experiences of immigrants and their families in the United States. What lessons do you hope students take from this class?

One important lesson we learn from immigrants is how everyone, metaphorically, inhabits more than one world. I mean, as an immigrant you are a member of your new society and you contribute actively to it, but you are also thinking of people and places in the country you came from. This is true for people who don’t immigrate as well – we belong to several overlapping communities.

I also share with students how the label “immigrant” is unevenly applied, so you can see – when you analyze who isn’t called an “immigrant” – how that neutral-sounding category has been racialized. What I mean is that people often think of, say, Mexican busboys in Chicago as immigrants (we read a great ethnography on them in the class), but international adoptees, college students studying abroad, and overseas aid workers are examples of people that don’t always get called immigrants. Why not? What is the difference between an “immigrant” and an “ex-pat”? The answer has to do with race and class.

My research on international adoption has found that adoptees, though not initially seen as immigrants, can eventually be affected by racial stereotypes against immigrants. I worked with kids who were adopted from Peru by Spanish, middle-class parents. They are raised feeling that they belong in Spain, but as they get older and are treated as immigrants – “hey you, get away from my car” – it’s suddenly a very jarring experience. The experiences that those kids have make very clear the persistence of racism – because they grew up not feeling it and then are hit with it.

Q: How does the U.S.’s approach to immigration, in light of the recent travel bans, demonstrate the political leadership’s ideals on family?

Three different versions of the travel ban have been attempted, and they’ve all been heavily criticized on grounds of religious discrimination as well as ineffectiveness. As someone who researches family relationships, I’ve been paying attention to the assumptions about who “family” is that are contained in those executive orders. So in the most recent one from September 2017, exceptions are considered if people from the targeted countries want to visit a citizen or permanent resident “close family member,” which is defined as “e.g., a spouse, child, or parent.” That statement allows only the most narrow definition of family. It excludes a lot of relatives that can be really important to people, like grandparents, for instance. So that ban is at an important level about immigration and xenophobia, but it also carries a narrow idea of what family is. That ultimately, and subtly, contributes to an overly narrow image of what a family is in other settings too, like family courts or schools.

Q: Oftentimes, local and state governments decide when a child should be taken away from a family. How do authorities decide what is in a child’s ‘best interests’?

There is no explicit definition of “best interests,” even though that’s the official wording that appears in all the legal documents, so any kind of measure of that is going to be fuzzy. Taking a historical view, for example, Native American children were removed from their parents in the 1800s because, if you took them away for their ‘best interests’, they could learn English and become assimilated. Now, we see that as a terrible thing to have done.

In research I did on child welfare in Peru, often what happened was the parent was too poor to provide the child with enough food and medicine to thrive. But Peruvian law says a child can’t be taken away from the parents only because of their poverty, so the authorities will look for reasons. For example, they’ll say that the child is malnourished, which is seen as evidence that the parent isn’t caring properly for the child – not as evidence of the parent’s poverty.

That is what can be insidious about [deciding] best interests for a child; it is really subjective and supports whatever the current power structure is. Wherever racism and classism exist, we can expect to see child protection services reproducing some of those patterns, even when they are trying to act in support of children.

Q: How can foster care and adoption systems, in your mind, be improved in the U.S. and internationally?

Doing what is good for a kid often conflicts with economic realities, but only because we let them conflict. If a parent does not have enough resources to raise a child who thrives, a simple solution would be to give the parent money – in monthly payments. Conditional cash transfers – where monthly payments are tied to things like school attendance or regular health checkups – have been tried in many countries around the world, like Brazil and Mexico as a couple of examples, and it has been shown to help reduce inequality and keep kids in school and better fed. In the U.S., we don’t have a good culture of giving broad social support. Giving cash to families every month, it doesn’t fit with the U.S. ideology of bootstraps and hard work, but it would be tremendously effective.

There are a lot of existing programs, too, that could lower costs of care and support families. Any program, like WIC [Women, Infants and Children Program], that gets food to families. Low-cost day care would be huge because a lot of families pay a significant amount of their income into daycare; it is surprisingly expensive. For somebody working at McDonald’s, for example, that is a huge chunk of their disposable income. The problem is work and caring for a family are not always tidily compatible, and instead of making it possible to do both, it is easier for budget-focused governments to say, you are not able to take care of your kid.

Jessaca Leinaweaver is a faculty fellow of International and Public Affairs at the Watson Institute. She is the author of ‘The Circulation of Children: Adoption, Kinship, and Morality in Andean Peru’ (Duke, 2008), which won the Margaret Mead Award in 2010.. Her most recent book is Adoptive Migration: Raising Latinos in Spain (Duke, 2013).