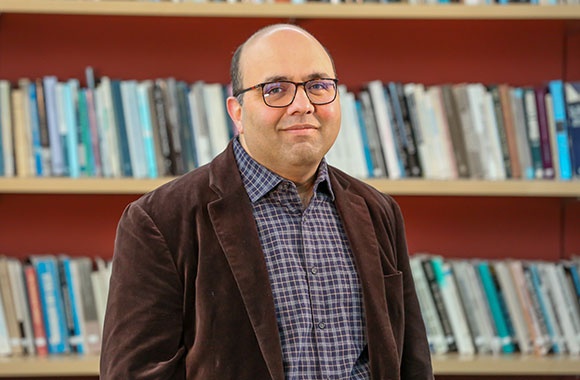 History as a Creative Act

A Conversation with the New Director of Middle East Studies

Shahzad Bashir, the Aga Khan Professor of Islamic Humanities, became director of the Watson Institute’s Middle East Studies program on July 1, 2018. Bashir specializes in the intellectual and social histories of the Islamic societies of Iran and Central and South Asia. Before coming to Brown in 2017, he was professor of Islamic studies at Stanford University for 10 years.

Bashir sat down with us to discuss his research, teaching, and vision for Middle East Studies at Brown.

WI: What is the focus of your scholarship?

SB: My first few books are on the evolution of movements that combined religion and politics from the 15th century through the present in Iran, central Asia, and South Asia—areas in which Persian was the major language of culture. I was very interested in messianic movements—for example, Sufi groups that became politically prominent, sometimes actually turning into dynasties. More broadly, I've always been interested in how ideas matter for large-scale societal changes. At the moment, I have become more interested in the way history is created.

WI: You’ve talked about questioning the idea of a reliable historical narrator. What does that mean?

SB: The basic notion is that anything that is said about the past is a claim that is being made in the present. For a current discussion, you have to construct a past, which you then use for your particular purposes. When we read people who are commenting on the past, we tend to think we know what actually happened. But we don't know what happened: we know about what someone said about what happened. Most of my efforts recently have been examining the lenses through which the past is constructed.

WI: You are a professor of religious studies, but you speak like a historian.

SB: I identify very much as a historian in the sense that I am most invested in historical questions. Until now, most of my work has been looking at histories in which religion was central. Now it's actually moved a bit away from that, toward history as such. The good thing about religious studies is that it has no method of its own. So you can be a historian, you can be a philosopher, you can be an anthropologist.

WI: Your study of religion puts the idea of creative history or questioning historical narrators into practice. Can you walk us through an example?

SB: My general attitude is that we have to get very comfortable with instability. That's where it’s interesting. If we're looking for stability ... the world is just too complex for it. Instead we can focus on why certain people come to represent certain things in a certain way.

Take the history of Islam. The first modern books on the topic were produced in the late 19th century in Europe and were written by people who were able to read the original materials in Arabic, Persian, Turkish, and so on. They read those materials and constructed a notion of what the history of Islam is, and this became very stabilized in the late 19th century, and now this is the history that Muslims most often tell about themselves.

WI: How do you feel, as a humanist, sitting in an institute of social scientists?

SB: I certainly do identify very much as a humanist. The strength of the humanities is in the details, in the particularities of language, texts, materials, iconography, and so on. But the social scientists provide thinking about structures and how to think about large-scale patterns. I would call myself a humanist whose work is inflected strongly by the qualitative social sciences.

WI: What interested you in the role of director of Middle East Studies?

SB: What compelled me is the way the Middle East Studies program here has developed. Brown is quite unique for the study of the Middle East at an advanced level in the United States. Until the end of the 20th century, there were a few professors here who were working in Arabic and history. After 9/11, there was more interest from a security standpoint. Then, in 2012, when [founding director] Beshara Doumani came, the university committed extra resources to match his vision. And that vision was constructed on not replicating the shortcomings that have happened other places – the tendency in Middle East studies to be inward looking.

So now we need to combine learning the languages and deep specific knowledge about these societies with an intellectual agenda that is forward looking, that attends to all the complexities these societies are contending with, without being subsumed by any one area.