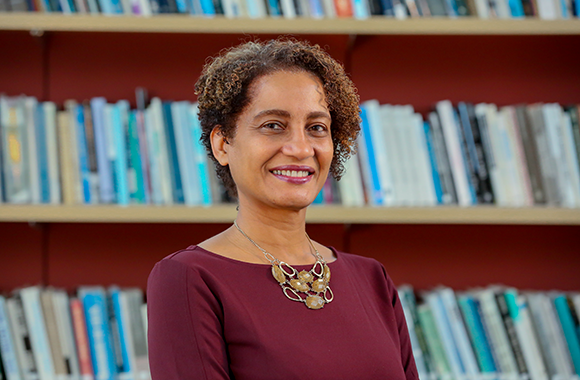 "I want [DS graduates] to have a sense of humility—that they’re there to learn, that their role is not to tell people how things should be done, but to understand that they’re part of a process in which they should want to engage and offer their insights."

Small States: Microcosms for the World

Patsy Lewis is director of the Development Studies Undergraduate Program at the Watson Institute, where she is a visiting professor and faculty fellow. She is also professor of regional integration and small states development at the University of the West Indies, Mona, Jamaica. Pan-Caribbean Integration: Beyond CARICOM, which she co-edited with Terri-Ann Gilbert-Roberts and Jessica Byron, was published this month by Routledge.

Q. Your research is on small states development in the Caribbean region. What questions are you trying to answer?

A. Generally, I am interested in the challenges that small states have in trying to operate as independent states in this global environment that assumes that all states start off on an even platform, especially when it comes to economic issues. That’s the underlying assumption of the World Trade Organization: that equality means we all get treated the same, with few exceptions, without looking at asymmetries in resources or how history has influenced what countries are capable of today.

Q. You’ve been taking a comparative look at the Caribbean and Pacific regions. What do they have in common?

A. Yes, I’ve been studying nations like Fiji, Vanuatu—the Pacific generally. This is a region that is very similar to the Caribbean—not in terms of its historical development, but certainly in terms of how it engages with the world today. In both regions, you have very tiny independent states, but you also have territories that are still not fully independent and are linked to a foreign power. They each have their own regional hegemon—Australia in the Pacific, the U.S. in the Caribbean.

Because of their small size and concentration in a narrow range of economic activities—in particular, agriculture—and their dependence on preferential access to the markets of their main trading partners, they have been at the forefront of the negative effects of trade liberalization. They are also particularly vulnerable to climate change. This allows us to compare how they have been affected, their responses and the alliances they have forged in addressing their common challenges.

Q. You will teach a course this spring titled “Bringing Small States In: How and Why They Matter.” What can we learn from studying small Caribbean nations, especially island states?

A. First of all, this group of countries has unique and interesting features that warrant academic inquiry—their small size and peculiar constitutional relationships, among others. Second, they provide a useful unit of analysis: the small scale makes relations and causality easier to establish, so they can serve as a microcosm for the issues faced by rest of the world. Third—and perhaps most urgently—these states are on the front lines of climate change. They give us early signs of the catastrophic dangers that climate change poses to humanity. Despite these challenges, they punch above their weight in culture, sports and diplomacy. In addition, and despite the negative consequences to their economies, they are a source of skills for developed countries, through emigration of their citizens.

Q. You have a bachelor’s degree in mass communications, a master’s degree in international relations, and a PhD in history. Do you bring this interdisciplinary inclination to development studies?

A. People always say “I’m a political scientist” or “I’m an historian” or “I’m an anthropologist,” but I’m very uncomfortable describing myself in any disciplinary frame. I don’t understand why I have to have a label. Being in a small place with high levels of migration of skilled people—certainly at the University of West Indies—and focusing on small-states development, sometimes you have to be a jack-of-all-trades. You’re in a position, and you are the position. You’re expected to function on a diverse set of levels.

I think it’s important to have that multi-disciplinary approach. There are so few of us looking at these questions that you have to be able to try and find the tools. I’m not an anthropologist, but I have to find a way to analyze these things and put them on the agenda as topics that need to be discussed.

Q. What skills and knowledge should a development studies concentrator have?

A. I want our DS graduates to be very critical. I want them to think about how they engage with people, especially from different parts of the world. I want them to have a sense of humility—that they’re there to learn, that their role is not to tell people how things should be done, but to understand that they’re part of a process in which they should want to engage and offer their insights.

You cannot address a problem without understanding where you are coming from and that you are bringing sets of assumptions. I want our concentrators to know that all ideas have a history and an expected outcome. You shouldn’t just assume that this is the right way because it seems obvious. I’m more interested in that than particular skills. You didn’t come to university to only develop a skill. Your education is much broader than that. Depending on your interest, you can pick up skills that can enhance what you’re doing along the way. I think that’s what will set you apart as a university-trained person than someone who was trained at a technical institute.