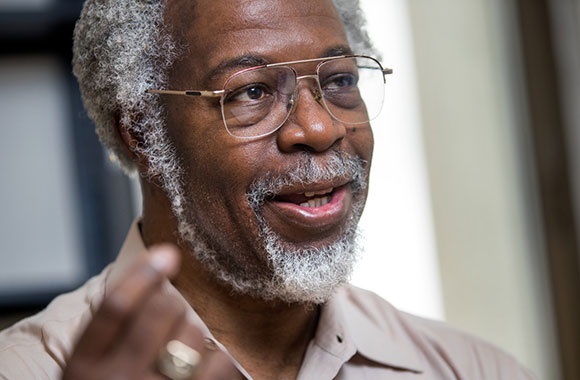 One of the Watson Institute’s newest faculty fellows is Sylvester James “Jim” Gates Jr., the Brown Theoretical Physics Center director, Ford Foundation Professor of Physics, and affiliate professor of mathematics at the University. Renowned for his work as an educator, researcher, and public policy adviser, Gates may be Watson’s only faculty fellow to appear in two television commercials and narrate a ballet. He calls his newest book, Proving Einstein Right: The Daring Expeditions that Changed How We Look at the Universe, co-authored with Cathie Pelletier, “an unconventional dream come true.”

WI: You’ve achieved great successes during your prolific career as a theoretical physicist focusing on supersymmetry, supergravity, and superstring theory. What drew you to the Watson Institute and to Brown, and what do you hope to accomplish here?

SJG: I have had – and continue to have – several careers. In addition to my teaching and research, I have been deeply involved in public policy, serving on the President’s Council of Advisors on Science and Technology (PCAST) during President Barack Obama’s administration, as well as on the Maryland State Board of Education and the U.S. Department of Justice’s National Commission on Forensic Science.

I have written extensively about diversity in the college admissions processes and, in fact, one of my essays on that topic was cited by the United States Supreme Court. With an abiding interest in public policy and forensic science – and the intersection of public policy and physics – I am exploring whether I can teach a short course on that intersection. Through research on Proving Einstein Right, I found some federal court decisions that are directly impacted by Einstein’s theory of gravitation.  The book features eight astronomers – a scientific “band of brothers” – whose work built on or reinforced Einstein’s theory of general relativity. Being at the Watson Institute offers me an academic home where I can continue to pursue my career.

At Brown, where I am now “a 68-year-old junior,” [Gates is now in his third year at Brown University] I want to continue to do great physics, which I hope will be the best physics of my career. With my current physics research requiring more knowledge of evolution, computer science, and biology, for example, I find Brown very appealing, given its cross-disciplinary approaches and very low barriers between disciplines.

WI: Your doctoral thesis was the first at MIT on supersymmetry. What drew you to the field of theoretical physics?

SJG: I fell in love with science at age 4, when I went to a science fiction movie, Space Ways. I discovered that science meant adventure and exploration, which I continue to experience at age 68. When I struggled to learn to read at age 8, a teacher recommended giving me reading material that interested me, so my father brought home books about space travel. A high school physics teacher, Freeman Coney, led me to focus my science interest on physics. During my teenage years, science fiction movies and comic books supported my imagination and interest in math and physics.

WI: You have received myriad recognitions, including Harvard Foundation’s Scientist of the Year and the nation’s highest honor awarded to scientists, the National Medal of Science, from President Obama. You were the first African-American theoretical physicist elected to the National Academy of Sciences. Given that, do you feel an obligation to nurture and help guide younger scientists, especially younger scientists of color?

SJG: I think all of us who have been so blessed by this country with lives where we have achieved our dreams should feel an obligation. I feel it keenly; my father served 27 years in the U.S. Army, so I have a tradition of service. If I don’t foster and guide younger scientists, who will? The field of theoretical physics may be becoming more diverse at a blazingly [slow] glacial rate, especially with respect to scientists of color. We’re doing a bit better in terms of gender diversity.

WI: How does your work reinforce or fulfill the Watson Institute’s efforts to promote a just and peaceful world through research, teaching, and public engagement?

SJG: I can provide practical perspectives on the intersectionality of science and public policy. There’s been some interest expressed in my research on connections between forensic science, science, and law, so I may lead some seminars on those issues. Science magazine published my essay about the critical importance of diverse colleges and universities, “Einstein v. Roberts,” which was cited by U.S. Supreme Court Chief Justice John Roberts.

WI: In addition to your 47-year-long career comprising teaching, public service, publications, lectures, and research, you’ve appeared on documentaries and PBS programs. Of all your endeavors, which brings you the most joy, and why?

SJG: [Gates points to a framed picture of his wife and children]. Those two young people bring me the most joy. My paternal grandfather couldn’t read or write, but he could do math, and my father didn’t finish high school but he learned trigonometry and calculus. I have always found math a natural language for me, so it’s gratifying to see that some of these traits appeared in my children, who are an enormous source of joy.