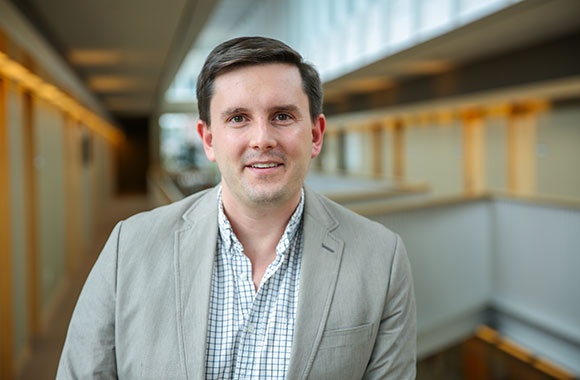 Tyler Jost, assistant professor of Political Science and Watson Institute assistant professor of China Studies, focuses his research on international security and Chinese foreign policy. After earning his Ph.D.in political science from Harvard University, he held post-doctoral fellowships with the Belfer Center International Security Program and Harvard-Columbia China and the World Program. Jost previously served as an officer in the U.S. Army.

TJ: My book examines the institutions responsible for deciding and coordinating national security entities that impact defense and foreign policy. For example, in the United States, the National Security Council (NSC), attempts to integrate and manage information and recommendations from many diverse bureaucratic organizations. Foreign and defense policies in the modern era require massive amounts of work – more work than any one individual could ever do. Heads of state, whether they are presidents, prime ministers or dictators, typically rely on a bureaucratic division of labor. Integrated institutional arrangements like the NSC are, at least in aspiration, intended to re-integrate what that division of labor pulls apart.

My book posits that when nations move away from integrated arrangements and instead adopt fragmented ones, they are more likely to stumble into – and poorly manage – national security crises. In the book, I try to test this argument, first through statistical analysis of new data on the ‘national security councils of the world’ since the end of World War II, as well as through in-depth case studies of how these institutions work in China, India and Pakistan.

WI: Is the U.S. national security approach integrated or deeply fragmented? Can you comment on the current administration’s NSC, which has faced so much recent scrutiny?

TJ: It fluctuates, but the NSC aspires to an integrated design. However, during the early Kennedy and especially, early Johnson White House, there were design changes to the NSC that pushed the United States in a more fragmented direction, which led to sub-optimal decision-making patterns. NSC processes in other administrations, particularly under George H.W. Bush, were far more inclusive and deliberative, notwithstanding the administration’s belief set and foreign policy goals.

WI: What drew you to focus on China? What are you working on at Brown and the Watson?

TJ: As an undergraduate, I initially intended to major in English, but I had to take a foreign language. I chose Chinese, honestly because I thought it’d be a hard language to learn and I like challenges. But I became completely fascinated with the study of China’s politics. The more I studied Chinese history and politics, the more I wanted to speak the language. The more I could speak the language, the more I could learn about Chinese history and politics, and so on.

Brown’s political science department offers an exceptionally strong intellectual environment filled with colleagues whose work I truly respect. This fall, I’m teaching a senior seminar, Foreign Policy in the People’s Republic of China. It’s simply a pleasure to sit down for a few hours each week to talk about the issues I’ve been thinking about for the past six years with these remarkably intelligent students. Next spring, I’ll be teaching a graduate level course on international security that I’m looking forward to, as well.

I’m also delighted to collaborate with Ed Steinfeld, the Watson Institute director and director of the China Initiative, to host several speaker events at Brown next semester. We are hoping the events will provide a forum for undergraduates, graduate students and faculty to engage with some of the leading thinkers on U.S.-China relations. First, Associate Professor of Government at Cornell University Jessica Chen Weiss will be speaking on March 5, at 4 p.m. On March 9, at 4 p.m., we’ll be hosting Ryan Hass, the Michael H. Armacost Chair in the Foreign Policy program at the Brookings Institution who was previously director for China, Taiwan and Mongolia at the NSC staff for President Barack Obama. Finally, we’ll have a renowned scholar from mainland China, whose information will be provided at a later date, speak on campus in the spring as well.

WI: Which China issues are currently top-of-mind for you?

TJ: I would say that the fundamental challenge for U.S.-China relations today is China’s rise. On the one-hand, growth in China represents one of world’s greatest economic advances and has brought millions of people out of poverty. On the other hand, this means that China is going to become more influential, politically, economically and potentially militarily. From the U.S. perspective, the question is: What are the costs associated with that? If the two nations have common goals, China’s increasing influence is trivial; if significant differences exist, tensions are going to arise. (Read more of Jost’s writing about U.S-China relations, including a commentary, “The New Pessimism of U.S. Strategy Toward China,” in the Dec. 28, 2017 issue of “War on the Rocks.”)