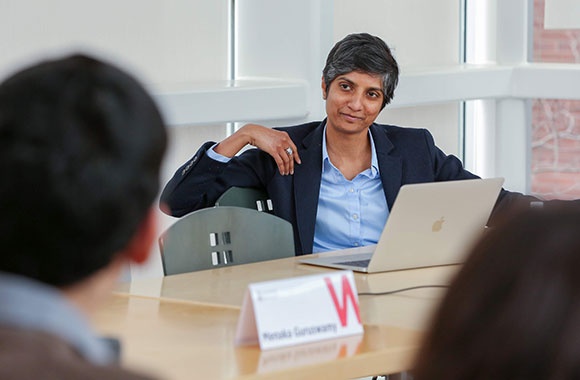 "I think that’s what attracted me to the Watson Institute – terrific people and an environment that provides a platform to have those kinds of multidisciplinary conversations."

Constitutional law expert on Civil Rights in India and the U.S.

Menaka Guruswamy, a senior advocate at the Supreme Court of India, is a senior fellow at the Watson Institute and the Center for Contemporary South Asia. In 2019, she was named to Foreign Policy magazine’s list of 100 most influential Global Thinkers and, with Arundhati Katju, named one of Time magazine’s 2019 list of 100 most influential people. Guruswamy talked with us about her role in a landmark Indian Supreme Court case and her engagements at the Watson Institute.

WI: You and your partner, Arundhati Katju, spearheaded the successful legal challenge to India’s statute that had criminalized consensual same-sex sexual relations. Were you surprised that the Supreme Court unanimously ruled that the statute was unconstitutional?

MG: We had hoped it would be unanimous. You always hope that big constitutional right/social value cases are decided that way.

It’s changed things enormously for gay people. Today, one of my clients sent me a new ad campaign from one of the country’s largest airlines. It talks about the many colors of love and it was a campaign of LGBTQ rights. Every seat on the airline’s planes includes this campaign message; I think before the decision that would have been unimaginable. The corporate world has publicly embraced LGBTQ rights, and gay people are more visible than ever. Bollywood, the biggest film industry in the world, has a new movie out with a same-sex couple and more are underway. Things have dramatically changed; it’s a journey and we expect more change and I think it will take more litigation.

WI: Can you briefly explain India’s citizenship debate, and the upcoming legal challenge  to India’s Citizenship Amendment Act (CAA)?  Are you representing those who have filed the challenge?

MG: At this moment, we live in a world that is increasingly more divided along what has been called tribalism – divided by lines of race and religion and ethnicity and caste. These distinctions should have softened out with time but, in fact, they seem to have hardened, just as they have in America. So I think the CAA is an example of a government further hardening those divisions by creating a pathway to citizenship that is premised on religion. It excludes one religion and includes all other religions; that makes it unconstitutional. I represent multiple clients who have challenged the CAA.

WI: What drew you to come to Brown University to serve as a senior fellow at the Watson Institute and the Center for Contemporary South Asia, which is housed there?

I have always been fascinated by the confluence of international relations, international politics and constitutional politics, which is what my work focuses on. I wanted to look at issues within a more multidisciplinary framework. It was nice to come here and have conversations with colleagues who work in different fields, including in health, movements, migration, American politics. I think that’s what attracted me to the Watson Institute – terrific people and an environment that provides a platform to have those kinds of multidisciplinary conversations.

WI: Tell us about your four-session study group, Divided Democracies: Constitutions and Politics in the United States, India and Iran?

MG: This study group, which had been open to all Brown students, examined the divided democracies of Iran, India and the United States, countries that are defined by the success of conservative, or what some would call totalitarian, politics. In each of these constitutional democracies, society’s deep divisions are escalating.

Iran has had violent protests and India has had both violent and non-violent agitations; in the United States you have a presidential election that is going to be increasingly divisive, as soon as the Democrats choose a nominee. It’s not just going to be about health care, but about identity, about race and gender. A new national poll from Quinnipiac University shows that, overwhelmingly, white men support Donald Trump and everyone else will support Joe Biden, if he is the nominee? It says something that, in the hierarchy of identity, race is often preferred to other identities. Unless we have conversations about what divides us, we’re not going to get to a place to make policy for all. It’s interesting times for the world at large.

WI: For the first time, several women were running for the Democratic nomination for president of the United States. Today, two elderly white men are the front-runners. Why is the United States – in contrast with many other nations, including India – unable or unwilling to elect a woman to the top position?

MG: we have or have had women elected heads of state in almost every single South Asian country, including Bangladesh, Sri Lanka, India and Pakistan. In the part of the world that I come from, it’s very strange that the United States has not elected a woman president or even a woman vice president. I think this is an interesting question: Is there something about presidential politics that makes it harder for women to stand for office? Is a parliamentary form an easier bet or is it just that you have that kind of disregard for women leaders in American politics? If it’s not about form of government, then is it about culture?

It’s not that you didn’t have qualified candidates. You had Elizabeth Warren who I think is fabulous; Warren, Kamala Harris and Amy Klobuchar are seasoned politicians who are clearly talented and hardworking. Hillary Rodham Clinton’s nomination and run for president was so historic. Yet, it is surprising that it came only in 2016, nearly 100 years after voting rights were extended to women. For me, I think there’s something about how gender plays out in American politics that needs interrogation. Compared with many other countries, even developing countries, America is really an outlier. Why is that, and what are the two major parties doing to remedy that situation?