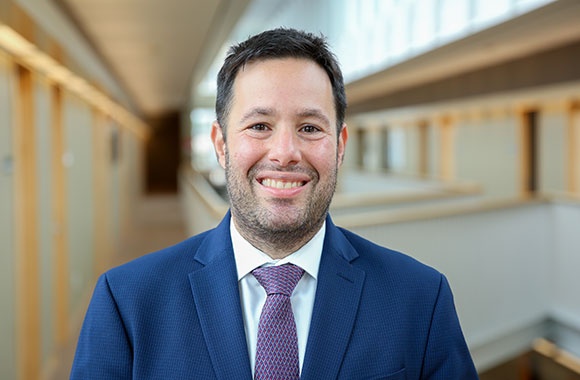 Dany Bahar is an Associate Professor of the Practice at the Watson Institute at Brown University. A Venezuelan and Israeli economist, Bahar is affiliated with the Harvard Center for International Development, and the Brookings Institution, as well as other research organizations. His most recent research addresses migrants and refugees as drivers of technology diffusion, knowledge transfer, productivity, entrepreneurship, and innovation.

As Professors of Practice for the MPA consultancy, Dany Bahar and David Blanding MA '09, PhD '13 will teach a seminar-style course during the spring semester of 2022 and 2023, respectively. In this new consultancy model, small teams of students will work with a designated consultancy client for 10-15 hours each week. In addition, a panel of experts – Bill Allen, Alice Heath, Nate Schwartz, and David Yokum – will advise the students throughout the consultancy.

WI: What drew you to the Watson Institute? Can you tell us about your teaching and research?

Bahar: After many years in Washington DC, in the policy and think-tank world, it felt right to go back to a purely academic environment. However, what particularly drew me to Watson is that it is not just another academic department within a University. It’s a place where everyone shares passion for evidence-based public policy, and where students are such a central part of the day-to-day.

One of my main responsibilities here will be to oversee the consultancy projects of the MPA students in their spring semester, which represent their capstone requirement. Each group of students will be working with an outside organization analyzing a policy challenge and providing solutions using the skills that they’ve gathered during their coursework. My role will be to accompany them in that process, guide them, challenge them, and help them add value to their organizations and the world, which is ultimately what drives all of us here at Watson.

And I must say, I’m also excited to be back in New England! I get so energized by walking around Brown’s campus, seeing a vibrant scholarly community. I’m thrilled to be here.

WI: As an immigrant yourself, can you describe your experience and explain how it has influenced your research focus?

Bahar: I think everyone’s personal experiences can define many of their interests and how they see the world. The one aspect that stands out in my own life is how we all move from place to place. My maternal grandparents survived the Holocaust and escaped Europe eventually finding refuge in Venezuela, pretty much the only country that would take them at the time. They arrived as refugees, as many other immigrants to Venezuela at the time, and made tremendous contributions to their communities and the country. I, myself, grew up in Venezuela and, after earning my B.A. in systems engineering from Universidad Metropolitana in Caracas, Venezuela, I moved to Israel. Because of my strong Jewish identity, and also conscious of the experiences of my grandparents,  who were persecuted and struggled to find a new home, I always saw in Israel a home and a safe haven (still until this day),  and decided I wanted to live there.

In Israel, I faced for the first time the challenges immigrants tend to have: the need to speak a new language, to meet new people, etc. Early on I went back to school to complete a MA in Economics, at Hebrew University of Jerusalem. Economics blew my mind. It provided such interesting frameworks to understand the world. One elective course I took, on Economic Development, provided me with a framework explaining why some nations are wealthy, and others poor. Having moved from a developing to a developed nation, it stunned me. This course inspired me to focus on economic development.

WI: You referenced how much is left to learn about immigrants’ role in economic development. What have you  learned?

Bahar: There are so many misperceptions about immigration and whether it’s good or bad. For decades, economists only focused on very narrow questions: Are immigrants taking our jobs? Will they raise or depress salaries?

We know now that immigrants are highly entrepreneurial and create businesses at much faster rates than do native-born individuals. Why? Well, an intuitive answer is that the act of immigrating is itself a risk-taking act, and good entrepreneurs are risk-takers. For this and many other reasons, when provided an easy, legal pathway to immigrate and work, immigrants are important drivers of a country’s economic growth and development.

A big part of my research is exactly about this. A lot of what makes businesses, countries, and the world productive is access to new knowledge and technology, which is hard to transfer and acquire. But immigrants are key in this process, because as they move from place to place, the knowledge and technology moves with them. That circulation of technology and knowledge is a key component of economic development.

WI: Immigration issues seem to be a conundrum for the U.S. government, regardless of which political party holds power. Are there lessons the United States can learn from other countries?

Bahar: Yes, the United States has a lot to learn about immigration policies, including from developing countries. An example close to my heart is the ongoing Venezuelan refugee crisis. Nearly six million Venezuelans have fled the country since the mid-2010s, making it a refugee crisis comparable to the Syrian one that the world has been experiencing for more than a decade. Colombia, Venezuela’s neighboring country, is hosting about two million of these Venezuelan migrants and refugees. In a massive act of generosity –but also of evidence-based policy—Colombia has put forward an expansive amnesty program that has provided regular migratory status to Venezuelans, even if undocumented, giving them also access to public services. These two million refugees represent four percent of the population of Colombia, a sizable group. But my ongoing research thus far has shown that these amnesty programs have had no negative effect on the local labor force, and they have brought many benefits, in the areas of female empowerment, entrepreneurship, and more. In a recent piece at Brookings, I argued that the timing is right to provide a legal pathway to residence and citizenship for the millions of undocumented immigrants in the US, following the example set by Colombia.

It should be clear to all of us, especially two years into the Covid-19 pandemic, that the U.S. simply can’t go on without immigrants. These workers complement the workforce, making all of us better off. If the U.S. has a problem with immigration, it’s that we need more immigration, not less.