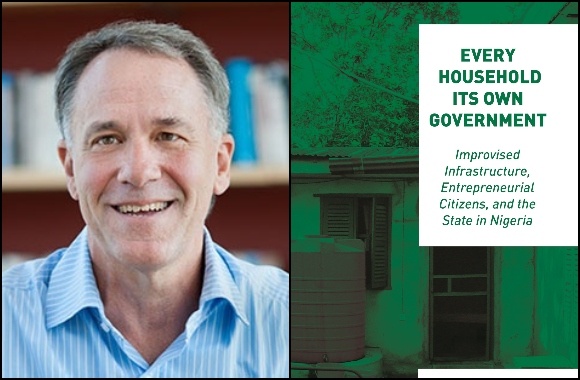 Improvised Infrastructure, Entrepreneurial Citizens, and the State in Nigeria

Daniel Jordan Smith’s newest book on Nigeria, Every Household Its Own Government: Improvised Infrastructure, Entrepreneurial Citizens, and the State in Nigeria, was recently published by Princeton University Press. The Director of the Africa Initiative since 2016, Smith is also the Charles C. Tillinghast, Jr. ’32 Professor of International Studies and a professor of Anthropology.

WI: This is your fifth book and your fourth single-authored monograph, all focusing on Nigeria – what drew you to Nigeria?

I first worked in Nigeria as a public health professional for three years, beginning in 1989. Those experiences led me to do my dissertation fieldwork there in the mid- 1990s, and I’ve been doing research in the country ever since. As an anthropologist, I find that there is great added value in continuing to go back to the same place over many years – what is now, for me, more than three decades. Because I know a great number of people and several communities very well, I can hit the ground running each time I return for research; and I feel more confident that I understand how significant social changes are affecting Nigerians’ everyday lives. Nigeria is an endlessly fascinating place. It’s impossible to run out of interesting things to study.

WI: What would you hope readers do with the book’s findings and analyses?

For my Nigerian readers, I hope that they find my ethnography accurate and my analyses resonant and persuasive. For others, I hope they empathize with the struggles Nigerians face, appreciate their resilience, and understand how important it is to have a government committed to the welfare of its people ­­– a fact nowhere more elemental than in the provision of infrastructure.

WI: What is the overarching message of this latest book?

The book has two overarching messages. The first is to impress upon readers just how much time and effort people in Nigeria – like many other places in the world – spend trying to cobble together fundamental infrastructure and basic services that many of us take for granted. The innovation and resilience that ordinary Nigerians exhibit in addressing the failures of the state to deliver reliable infrastructure in Africa’s most populous country are remarkable. The second message is that Nigerians’ entrepreneurial, informal economic efforts to create infrastructure, though appearing to sidestep the state, in fact involve a huge amount of interaction with the government. People’s struggles to deal with the state’s shortcomings shape the experience of citizenship and, paradoxically, help to solidify state power. The state is not only present in its apparent absence, it is also complicit in, and benefiting from, its seeming failures.

WI: Is there a realistic solution to this dilemma? What would it take to make the state more accountable to its citizens?

Making the Nigerian government more accountable is tricky. Political elites – and even lower-level officials – benefit from the current situation and steer the state accordingly. Also daunting for effecting change, ordinary people’s livelihoods are often tied to taking advantage of the system as it is, ironically investing many citizens in arrangements that they would otherwise prefer to change.

WI: Is there an especially egregious or problematic example of the infrastructural deficiencies that stood out in particular and how it affected people's lives?

One of the striking things about infrastructure is how each domain intersects with the others. So, for example, when there is no electricity, the pumps people use to access water from boreholes do not work, and the mobile phones everyone depends on for communication can’t be recharged. This makes it hard to pick out just one deficiency and elevate it above the others. In lamenting the country’s infrastructural woes, Nigerians have a common refrain that led to the book’s title: “Every household is its own local government.” The saying conveys the reality that in their everyday lives, people must cope with the state’s failure to provide any kind of reliable infrastructure.

WI: Given this situation, what worries you about Nigeria? What gives you hope?

I think what worries me most about Nigeria is the ever-increasing mismatch between people’s expectations and the realities they face. Despite the ingenuity demonstrated in Nigerians’ improvisation of infrastructure, life is hard and people are frustrated, especially with the government. The combination of unfulfilled expectations, an often-corrupt state, and a burgeoning population add up to a potentially combustible mix. The capacity of the citizenry to cope in the face of the state’s often deliberate neglect surely has its limits.

What gives me hope is the tireless capacity of Nigerians themselves to maintain hope in the face of seemingly intractable obstacles. Most Nigerians I know sincerely believe that their country’s future is bright. And who better to translate those hopes into realities than Nigerians themselves?

WI: How does your research on these issues inform your work as the Director of the Africa Initiative and vice versa?

My work as a scholar and my role as Director of the Africa Initiative intersect in many ways, but perhaps especially in the commitment to raising awareness about Africa and contributing to a more accurate understanding of the continent and its people. Of course, in my research and scholarship I am focused only on Nigeria, whereas the Africa Initiative considers the entire continent. But as Nigeria is Africa’s most populous country by far, what happens there is hugely relevant beyond the country’s borders.