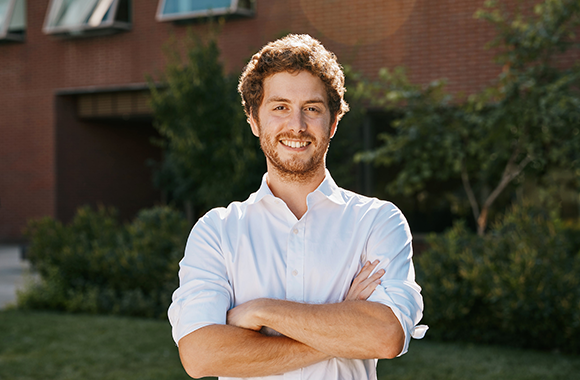 Connecting the Many Dots Between Inequality and Populism

Nicolò Fraccaroli is a political economist whose research focuses on populism, central banking, European politics, and austerity. Nicolò has co-authored, with Robert Skidelsky, the book Austerity vs Stimulus: The Political Future of Economic Recovery (Palgrave Macmillan, 2017), which reconsiders the economic and political debate on the austerity policies implemented in the United Kingdom and Europe since 2010.

You’ve studied in New Zealand, England, and Italy; what led you to pursue your postdoctoral fellowship at Watson’s Rhodes Center?

The Rhodes Center for International Economics & Finance Center focuses on ambitious questions that are aligned with my research interests. We explore how financial and economic distress affect politics, and how different growth models influence the evolution of party systems. It’s a great asset to have the Rhodes Center be part of the Watson Institute, with its diverse environment that is enriched by the intersection of different disciplines and approaches. My work in economics and political science greatly benefits from my interactions with colleagues from sociology, geography, anthropology, and history. I am fortunate to work with Professor Mark Blyth, the Center’s director, who has inspired my past research and is an invaluable resource for my current work

You’ve also worked in three countries. How do those international assignments inform your research and teaching here?

They were fundamental in shaping my research path. Working at the European Central Bank (ECB) in Frankfurt and the Bank of England in London gave me a unique perspective of central banking, which I could evaluate in light of my academic knowledge. My work with the ECB’s unit dealing with the bank’s political affairs inspired three articles, in which I analyze how legislators interact with central banks.

The first article, which is forthcoming in the International Journal of Central Banking, reviews how legislators interact with central banks in Europe, the United States, and the United Kingdom, and demonstrates that inflation is crucial in determining these interactions. In the second paper, which is now available as an ECB Working Paper and is forthcoming in the European Journal of Political Economy, I show that ideology affects how legislators discuss monetary policy with the central bank during hearings. Both articles are co-authored with my former ECB colleagues.

The most recent paper analyzes congressional hearings on the Federal Reserve Bank. With my co-authors, we show that legislators tended to interrupt Janet Yellen, as Fed chair, more than they did her male predecessors or her successor, Jerome Powell. We find that members of Congress with one or more daughters are less likely to interrupt Yellen than those with none, suggesting that their interruptions stem from a gender bias.

At the Bank of England, I was working in the EU Withdrawal Unit during a period of great financial transformation for the UK. I directly observed how different stakeholders’ policy interests aligned or clashed, in ways that often contradict what mainstream theories predict. With two colleagues from the Bank of England, we contributed to the policy debate with a study  on how bank supervisors’ political independence can benefit financial stability.

These experiences enabled me to design Economics for Public Policy, a course for the Watson Institute that addresses the reality of policymaking. While preparing the course, I considered these questions: What would a student need to get as close as possible to the experience of being a policymaker? What practical knowledge made a difference in my work experience? What knowledge did I feel I lacked when I began working in each venue?

Throughout the course, I push students to tackle challenges and evaluate debates that people working in economic policy face today. I believe this approach helps students think critically about real world problems, while also having fun.

Your research focuses on connections between economic factors and changes in party systems. Can you elaborate?

My research projects here are based on two broad themes.

First, I explore how economic factors influence political preferences. I’m currently investigating the impact of banking shocks on individuals’ voting preferences. By combining individual-level survey data with textual data on political speeches, Alessandro Pizzigolotto, a doctoral candidate at the Norwegian School of Economics, and I are studying which aspects of populist rhetoric matter when individuals suffer from a drop in bank credit. Our preliminary results indicate that credit shocks tend to mobilize people to favor parties with a populist rhetoric around bank issues.

More recently, Professor of International and Public Affairs Mark Blyth and I have begun to explore whether anger in political discourses is a catalyst or inhibitor of electoral success. His recent book Angrynomics, co-authored with Eric Lonergan (Columbia University Press, 2020) an economist and author, is a source of inspiration for this project.

As an economic consultant at the ECB, I’m exploring the link between economic inequality and public trust in the ECB. While inequality tends to decrease such trust, we’re investigating whether this effect varies when we compare perceived inequality and actual inequality, and whether inequality affects trust toward other institutions.

How might the might economic sanctions on the Russian economy as well as Putin’s invasion of Ukraine impact European economics and banking systems?

One of the Russian invasion’s main economic impacts is to accelerate the growth of inflation unexpectedly, particularly by putting pressure on energy prices. This poses a challenge for the ECB, which must maintain price stability, and which could encounter consistent political pressure.

So far, the main risk for the banking sector in the euro area is contained and related to the impact of the sanctions on Sberbank, the Russian state-owned bank, which had subsidiaries in some European countries. However, the scenario may worsen soon for European banks if policymakers opt for a more restrictive monetary and fiscal policy to fight inflation. In addition, the European economy is highly dependent on Russia’s oil and gas exports.

One political risk is linked to the economic distress generated by the Ukraine invasion. In my research and that of other scholars, I show that once people face a strong economic shock, they tend to change their political preferences to favor populist parties. Thus, there is a risk of an emergence of a new wave of populist voters. However, it is difficult to imagine how current populist leaders, such as France’s Marine Le Pen and Italy’s Matteo Salvini, will reconfigure their rhetoric, which, to date, has been pro-Russian and anti-European.