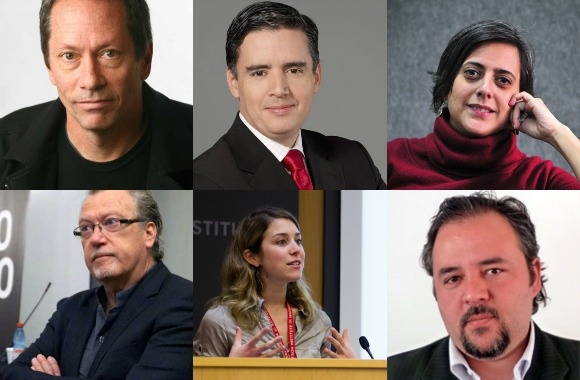 "[Narratives] are the thing that the human mind latches on as the first explanatory way of grasping and making sense of the world.”

What do We Know about Inequality in Latin America and How Effectively Do We Communicate about it to the Public?

A panel of journalists concluded the conference, “Declining Inequality in Latin America: Are the Good Times Over?,” with a discussion about how economists can best convey their findings to the public.

With a photograph juxtaposing the crowded houses of a poor neighborhood and the Jacuzzis and green lawn of an elegant, high-rise apartment building, Richard Snyder, the director of Brown University’s Center for Latin American & Caribbean Studies, opened Thursday’s panel on Latin American inequality.

Snyder explained that the panel would try to “make sense of what [had been] learned and discussed” throughout the two-day event. He encouraged audience members to consider the importance of key messages from the conference—and to think about how they might continue to communicate about inequality after the event’s conclusion.

The panel’s first speaker was New York Times’ Economics Scene columnist Eduardo Porter. Although he professed to deal in “more hand-wavey types of arguments” than the economists of the previous panel, his column often focuses on the hard issues of inequality in the United States and abroad.

Porter pointed out that the conference’s discussion had often lacked comparisons that could illuminate Latin America’s inequality problem by bringing in the broader context of what other countries are trying to do about the issue. He highlighted the value of this and other narratives in developing effective communication techniques, but also emphasized that incorporating concrete data into those messages was essential to “understand[ing] these issues in a real way.”

“What is the challenge going forward?” Porter asked. The journalist suggested that the U.S. model and the social democratic model had not necessarily provided traversable paths towards equity. Further complicating the ability to reach a viable resolution to the problem, he said, was the fact that, “you can pretty much forget about taxes and transfers as a way to solve social inequality.”

Instead, more creative solutions involving such diverse areas as legal systems, competition policies and education programs would have to be included in any comprehensive solution, he insisted. Although the issue is a difficult one to solve, “we can’t just stand here and say, well, we’re not going to get anything,” he said.

Porter encouraged the audience to make sure that they constructed effective narratives for communicating about inequality and suggested that more conferences like this one needed to take place—not just in the United States, but also in Latin American countries.

Like Porter, Jon Lee Anderson of The New Yorker expressed that effective communication required storytelling. As a field reporter, Anderson said that he had spent much of the conference “in a state of bewilderment” at the esoteric details of the economic models. Anderson additionally observed that both the lack of consensus on what inequality is and the problem of having had success at eradicating poverty, but not inequity, had complicated the debate.

He commented that the economists had a particular lexicon for explaining these phenomenon, which could be “complex or alien” to a reporter or the public, and he suggested that “a more proactive approach by academics to communicate their findings” could help create better vehicles for illuminating economic problems and solutions.

Anderson explained: “In the end it’s about telling stories; that’s what humans like.” He added: “and ideally stories with a human face.”

Anderson explained: “In the end it’s about telling stories; that’s what humans like.” He added: “and ideally stories with a human face.”

Panelist Professor María Esperanza Casullo from Universidad de Río Negro in Argentina confessed that she was in a unique position of the bunch, being an academic rather than a journalist. However, she explained, she often engages in public discourse and her studies focus on political communication.

Casullo noted that the conference had perhaps inadequately addressed one key aspect of the inequality debate: developing an explanation of why inequality is bad. “We all sort of agree that [reducing inequality] is what needs to be done,” she said, “but looking at the bigger society…this is a case that we must make more forcefully.”

She alleged that academics should not take a desire to eradicate inequality for granted, and that they should focus on how to present and argue for their ideas from the ground-up. Casullo offered that the conversation about inequality and its solutions could be more complex than many might assume. “Do we know what kind of new landscape we are trying to build?” she asked. “I don’t think that we do, frankly.”

Like several of the other panelists, Casullo also discussed the importance of narratives, saying they “are the thing that the human mind latches on as the first explanatory way of grasping and making sense of the world.” She encouraged economists to build narratives that are not just normative, but are also prudential.

Furthermore, she highlighted a number of “Catch 22” effects that could make inequality harder to eradicate. For example, an effective solution will require elite leadership, although elites are unlikely to champion equity, and will additionally require a state that is able to institute reforms—which, she said, “Latin American states are not.” Casullo additionally noted that the failure of the socialist model in Cuba had left the region without a “coherent, theoretical and economic alternative” to the status quo.

That “voters don’t vote on this topic” and “parties don’t create political platforms along this topic” only make it more difficult to spur political action, Casullo said. However, she did have two suggestions for developing productivity in the inequality debate. First, academics should frame their arguments in the language of rights, and second, economic data should be combined with political imagination to create compelling descriptions of inequality in the region.

Although difficult, the task is not impossible, explained López, who believes that “people are interested in hard news [and] things that affect them”—and that inequality is one such topic. He framed the challenge in terms of making data relatable to the public through comparisons and by highlighting concise messages. “There is a way,” he told the academics in the audience, “of making sure that all the good work you do goes out and reaches people.”

Miguel Paz, the president of the Poderomedia Foundation and a Nieman Berkman Fellow at Harvard University, suggested several techniques that could be useful to that end. “Know that journalists don’t care about what you need,” he said. “I care about what I need, which is to satisfy the needs of my users, my audience.”

Paz expressed that realizing journalists “hate press releases,” want exclusive information, and are consistently time-pressured could help academics develop communication strategies to enhance the quality of coverage on their research. He also advised academics to focus on distilling soundbites from their content that could be easily conveyed to a general audience.

With regard to inequality, Paz added that the communication problem was particularly difficult. “If you live inequality, you aren’t worried about it, because you are thinking about getting through the day, and the month,” he said. “It’s an issue that has to be presented in the right context.”

The panel’s final speaker was Alexandra Ulmer, a journalist for Reuters stationed in Venezuela, who sought to explain the everyday realities of the country’s enormous struggle with inequality and poverty. Ulmer quipped: “the good times are a very distant memory for Venezuelans at the moment,” as she discussed the tragedy of shortages of goods and long queues for basic supplies like diapers and milk. “That’s something we, as journalists, can try to convey” she said of these stories.

However, Ulmer observed, the scarcity of information about Venezuela’s economy—a problem exacerbated by the lack of transparency on behalf of the government—made covering the country’s situation difficult, and had even enabled some journalists to “sensationalize what is happening.”

“Venezuela is very much its own reality at the moment,” said Ulmer. All journalists can do is use the “incredible” stories of Venezuelans to illuminate the current conditions, but that alone does not paint a full picture. “What we need is data,” she concluded, prompting an lively discussion among conference economists and journalists regarding the nature of the relationship between data and narratives.