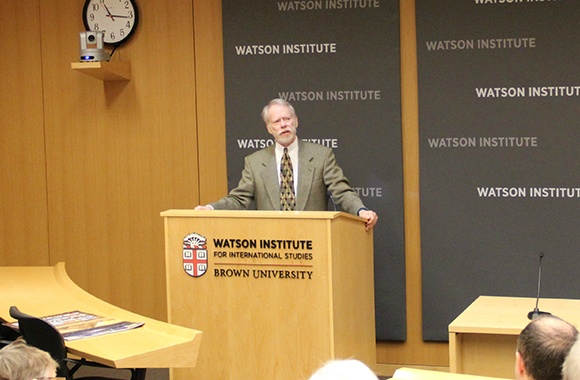 “If you believe that it matters, then one starting point would be strategic vision. Where would you want this relationship to be five years from now that’s realistic?”

Russia in the World

On Tuesday, February 24, more than two-dozen members of the Watson community convened for the first Watson Institute Faculty Forum featuring Russian expert Robert Legvold. In kicking off the event, Watson Director Richard Locke noted that while Watson is known for its many open events to the public, he hopes to have more “smaller sessions for the faculty to come together and learn and discuss ideas to inform our teaching and research.”

Professor Legvold, Marshall D. Shulman Professor Emeritus in the Department of Political Science at Columbia University and member of Watson’s Board of Overseers, took the podium, warmly thanking everyone for attending, stating ,“It’s almost like coming back to family.” He began the conversation with a surprising statement. “I’ve come today to confess my ignorance, and I’m particularly focused on what the implications of my ignorance are.” Over the next hour, Legvold explained the insufficient research surrounding Russia and its foreign policy, and how this deficit has resulted in policy decisions based on ignorant or stereotypical views.

“Are we looking at Russia’s Putin or Putin’s Russia?” Legvold then offered a variety of views on Putin’s current regime, questioning where it represents one of continuity from the Soviet Union or something fundamentally new. “I don’t see serious work that seeks to establish one or the other view in any systematic fashion. We are not making much progress in unleashing Russia’s mystery and enigma.”

Citing low oil prices and the West’s imposed sanctions, Legvold worried about growing instability in the region. “This system is going to blow up and it’s going to blow up soon.” With regard to sanctions, he noted, “we are trying to affect short-term behavior with instruments that have long-term effects.” Increased instability could mean that “we might get Putin II, which might look worse than the current Putin.”

He concluded by asking attendees for more research in this area. “We need to be aggressive about tackling ambiguity. We need to have seminars where the big question is tackling this ambiguity.” From nuclear weapons to the Arctic to the Euro-Asian partnerships, Legvold emphasized that Russia will remain important. “If you believe that it matters, then one starting point would be strategic vision. Where would you want this relationship to be five years from now that’s realistic?”

Following Legvold’s speech, a number of professors responded with questions that tended to arise from their own research. Many also brought up the recent conflict in Ukraine, which Legvold addressed as “not an isolated incident.” To that effect, a member of the audience commented with a haunting message, “What if central Europe becomes again unstable in the context of another Cold War?”

The Forum appeared to be a great success. Indeed, Peter Andreas, a Watson faculty member, praised Legvold. “Every time you come, I learn something new. And I learned something new today—the litmus test for a great talk.”