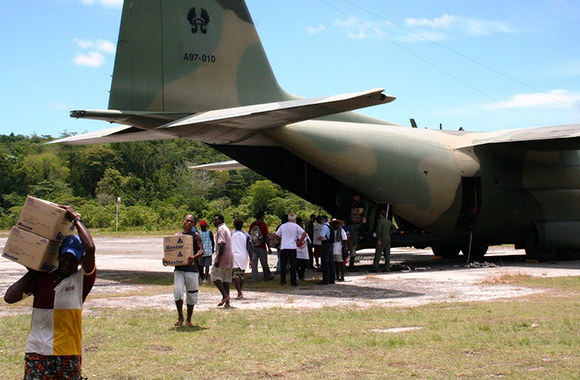 “The practice of humanitarianism is a daily struggle between being principled and being pragmatic.”

“The practice of humanitarianism is a daily struggle between being principled and being pragmatic,” said Unni Karunakara, former International President of Médecins Sans Frontières (MSF) during a visit to Brown on February 23.

Dr. Karunakara, who started working for MSF in 1995, recently stepped down after more than three years at the helm of the international medical humanitarian organization. During his visit as part of the Watson Institute’s Security Seminar Series, he met with students from Professor Vazira Zamindar’s course on refugees and later lectured at the Joukowsky Forum. An expert in forced migration and the delivery of healthcare to populations in conflict zones, Dr. Karunakara offered students and faculty a compelling history of international aid, as well as an overview of the current challenges facing the humanitarian community.

Alan Negron ’17, a student in Professor Zamindar’s class, said it was valuable to discuss the differences between humanitarian action and development aid, which are often conflated in practice.

Dr. Karunakara began his public lecture by explaining that, historically, humanitarian aid was motivated by the “three Cs”—Christianity, Civilization, and Commerce. Throughout the 19th and 20th centuries, health services established by colonial powers were intended to prevent mortality among the ranks of European colonists.

Over time, concern for citizens’ wellbeing, rather than that of soldiers, became an international priority.

Today, more than $25 billion is spent annually on responses to civilians affected by conflict, disasters, and epidemics. “Even as the scale and scope of assistance grows,” said Dr. Karunakara, “we are unable to provide assistance in some of the most devastating humanitarian disasters of our time.”

Dr. Karunakara is acutely aware of the impact the global “War on Terror” has had on humanitarian action. First, he said, it has shattered the trust between humanitarian groups and civilians that is so crucial to any intervention’s success. War itself, he said, is being projected as a form of humanitarian assistance.

One resultant problem is civilians’ inability to distinguish between aid workers and soldiers.

“In Afghanistan, you had NATO soldiers deliberately portraying themselves as aid workers, driving around in white and red vehicles with civilian clothes,” he said.

One example of the instrumentalization of humanitarian aid, he said, is the CIA’s use of a vaccination campaign in Pakistan to root out information pertaining to Osama bin Laden’s whereabouts.

“When humanitarian assistance becomes militarized, either in terms of modus operandi or public perception, that’s the moment when healthcare facilities become military targets,” he said.

In Haiti, armed soldiers clad in UN garb stormed an MSF hospital, and began harassing patients in an attempt to gather intelligence. Around the world, soldiers or members of militias drive cars with International Committee of the Red Cross (ICRC) or MSF logos.

MSF employees have been attacked in countries like Somalia, Kenya, Syria, and the Central African Republic.

“In none of the places where we work today do we have armed guards. We build trust and negotiate our space, and that’s how we’re able to work,” he said.

Dr. Karunakara’s toughest day on the job was announcing that after 22 years of service, 16 staff deaths, and 1000 security incidents, MSF was formally withdrawing all staff from Somalia.

The barriers to success as a medical aid organization are not always violent. Often, they have to battle excessive or vindictive bureaucracies, wasting valuable time convincing leaders that the interests of civilians, government officials, and aid workers align.

During the Q & A immediately following the lecture, Rohan Rastogi ’18 asked about MSF’s lack of internal security forces. Dr. Karunakara said that what gets lost in security concerns are the ideals and principles for which aid workers stand. “The optics of providing assistance with bodyguards and protection is contrary to what humanitarian action is about,” he said.

“If I have to put effort into establishing relationships and coordinating, I’d rather coordinate with governments than through the UN,” said Dr. Karunakara. “It’s much better for action and transmission of information.”

Despite the many challenges facing the humanitarian community, Dr. Karunakara remains hopeful that reforms from within can bring about change. He believes in considering the worldviews of differing civilian populations and the responsibility of aid organizations to be more transparent.

“We’re hitting every single physical ‘frontier’ there is to hit, and we have to deal with it,” he said. “But ‘sans frontières’ is a state of mind.”