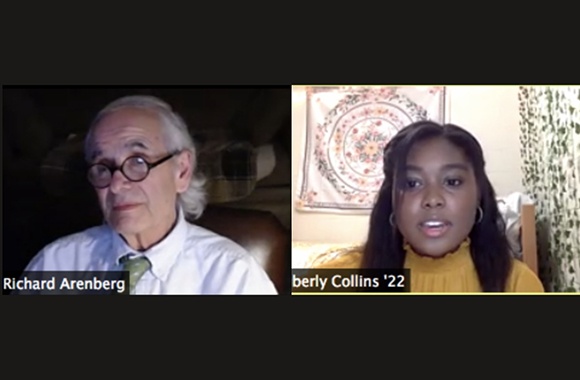 Experts at the Ready: Making Sense of Election Night 2020

"Should we really be surprised?"

That was the question asked by an attendee as former Office of the United States Trade Representative Ira Shapiro spoke at around 11 p.m. on November 3, in the final stretch of a four-and-a-half-hour-long Election Night Watch Party. The event, hosted by the Taubman Center for American Politics and Policy and part of Watson’s Election 2020 series, featured student, faculty, alumni, and other speakers via webcast and was attended by more than 300 people.

Following a faculty panel from 7 until 8 p.m., a range of political experts spoke throughout the evening, including Pam Thiessen ’90, chief of staff for Senator Rob Portman (R-OH), NPR journalist Louise Schiavone, and Heidi Heitkamp, former U.S. senator and current Watson fellow. They and others offered commentary of live television coverage of the race to claim the White House and U.S. Senate. Over the course of the evening, viewers sent in more than two dozen questions, all of which were answered by the guest speakers and Richard Arenberg, interim director of the Taubman Center and host of the event.

Arenberg ended the evening with a somber prediction. "I think that if it does come down to Pennsylvania, there will be legal battles involved, it will take a long time and it’s just going to be a very messy process," he said.

Click here to catch up on election-related events and analysis of the 2020 election.