Austin Carson ─ Keeping It Professional: Language and Bureaucracy in the Cold War 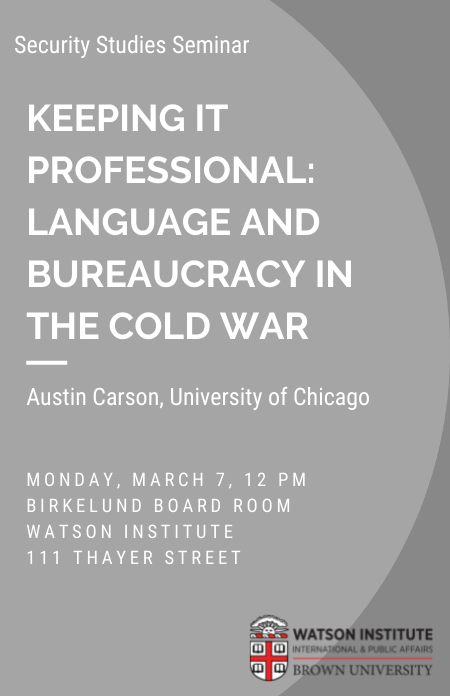 Austin Carson is an assistant professor in the Department of Political Science at the University of Chicago. His main research focus is the politics of secrecy in International Relations. His first book, Secret Wars: Covert Conflict in International Politics (Princeton UP 2018), analyzes puzzling secrecy patterns that arise when outside powers intervene in foreign wars. The book develops a theory based on conflict escalation dynamics, showing that states use covert intervention and conceal others' covert activity to keep war limited. An article analyzing the secret side of the Korean War was published in International Organization. His second book project, in collaboration with Allison Carnegie (Columbia), analyzes the role of intelligence and other forms of sensitive information in international organizations. His other research addresses the signaling value of covert action, secrecy's role in insulating international regimes from damaging rule violations, and dynamics of limited war. Dr. Carson received his PhD from Ohio State, BA from Michigan State, and has held research fellowships at Princeton University's Niehaus Center for Globalization and Governance and George Washington University's Institute for Security and Conflict Studies.

The format of the seminar is a brief (5-minute) introduction by the author, some initial comments by a lead discussant (5-10 minutes), and then open comments from attendees. All attendees are expected to read the paper ahead of time, as the author will not present their research.

A paper will be available one week in advance of the talk. Email watsonevents@brown.edu to request a copy of the paper.