With her deep exhibition history and critical biography, Kruger is recognized internationally for bold text-based works in monumental scale that confront audiences in public spaces, putting us immediately on the spot, as here. Her content is "pride and prominence and power and control and fear." She emphasizes, "I try to make work about how we are to one another." Commissioned in 1990 and re-presented in 2018 inescapably on the L.A. museum exterior, the flag mural demands to be seen, heard, and heeded. Kruger lives bi-coastally, in Los Angeles and New York. 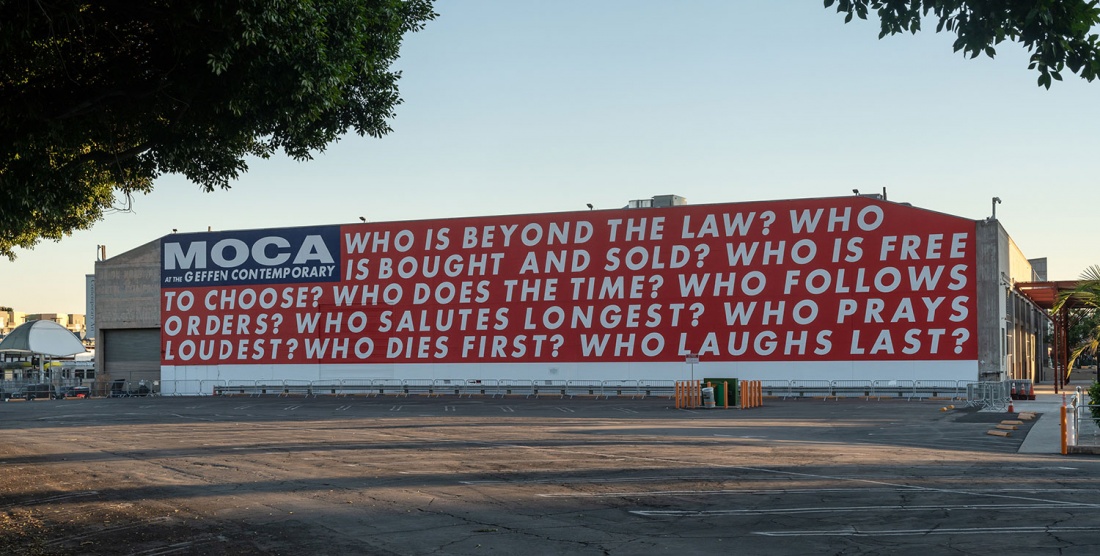 Untitled (Questions), 1990/2018
on view October 20, 2018–November 2020 at The Geffen Contemporary at MOCA, photo by Elon Schoenholz
Courtesy of Barbara Kruger and the Museum of Contemporary Art, Los Angeles

Commissioned by MOCA in Los Angeles in 1989 for A Forest of Signs: Art in the Crisis of Representation, it was first seen on the south wall of MOCA (now The Geffen Contemporary at MOCA). Currently, in 2020, Untitled (Questions) is placed on the impactful north façade of the building, with an astonishing dimension of 30 x 191 feet. The project was initiated by MOCA Director Klaus Biesenbach and organized by MOCA Senior Curator Bennett Simpson.

The museum writes on its website that "The work holds an iconic place in the collective memory of Los Angeles’s art community and is considered one of the museum’s curatorial highlights over its forty-year history." https://www.moca.org/exhibition/barbara-kruger-untitled-questions-2. On the occasion of its new installation at MOCA, the museum undertook a series of voter registration efforts.

Nine demanding questions seem to shout from the stripes of the mural's flag pattern. In the artist's words, explained in a video for the MOCA website, this was "an opportunity to make a statement about pride and prominence and power and control and fear. The questions were always the important part of the work to me. The questions were always about values and control and power. . ." [The MOCA video https://youtu.be/YymHilOaf_8 is directed by Marco Kane Braunschweiler; video by Troyese Robinson; sound by Nevin Kallepalli; drone photography by Ryan O'Connor; title design by Michelle Cho.]

Reflecting on her work Kruger stated in a 2011 YouTube interview based in her 2010-11 Schirn Kunsthalle, Frankfurt exhibition called Circus, "[...] art is the creation of commentary, whether its visual or music or writing, it's sort of the way the artist figures out how to visualize, or textualize, or musicalize their experience of the world." She also plainly remarked, "I try to make work about how we are to one another." [https://www.youtube.com/watch?v=DP7hbDkJql8. Schirn video edited by Dorothea Apovnik and Miriam Fuchs.]

Barbara Kruger, born in Newark, New Jersey, studied at Syracuse University and Parsons School of Design, New York. She was propelled by additional foundation as a magazine designer, and then a freelance picture editor and graphic designer. She was featured in the Whitney Biennial of 1973, followed thereafter by an exhibition in Artists Space, New York. Solo exhibitions proliferated in the decade of the 1980s, including P.S.1 Contemporary Art Center, Long Island City, New York, the Institute of Contemporary Arts, London, and various major galleries including Gagosian Gallery, Los Angeles, Rhona Hoffman Gallery, Chicago, and Mary Boone Gallery, beginning in 1987. Kruger has been celebrated in Germany at Monika Sprüth Galerie, Cologne, and has had major exhibitions at Sprüth Magers, including Barbara Kruger: Forever in Berlin (2017–2018). Formerly represented by the Mary Boone Gallery, Kruger has long been represented by her primary gallery, Sprüth Magers (Berlin, London, Los Angeles). David Zwirner (New York, London, Hong Kong, Paris) announced its representation of Barbara Kruger in collaboration with Sprüth Magers beginning November 21 2019.

In 2005 Kruger received the Golden Lion for Lifetime Achievement at the Venice Biennale; in this connection she was commissioned to design the façade of Italy’s national pavilion.  In 2019 she was awarded the Kaiserring (“Emperor’s Ring”) prize from Goslar, Germany, and a solo exhibition was held in Goslar's Mönchehaus Museum in conjunction with that honor. A major survey of Kruger's work over 40 years, entitled Thinking of You, I Mean Me, I Mean You (sic) is scheduled for the Art Institute of Chicago next fall.

International Kruger solo exhibitions too numerous to mention have been mounted from Washington, DC to Stockholm, Sweden to Seoul, Korea, in addition to public installations devised for venues ranging from billboards to leading museums. Needless to say, museum collections worldwide can boast of having her work. Kruger is also a Distinguished Professor in New Genres, UCLA Department of Art. She lives and works in Los Angeles and New York.