Mark Blyth ─ When You Find Yourself Going Through Hell, Look for an Exit: Austerity Policies in 2014 and Beyond 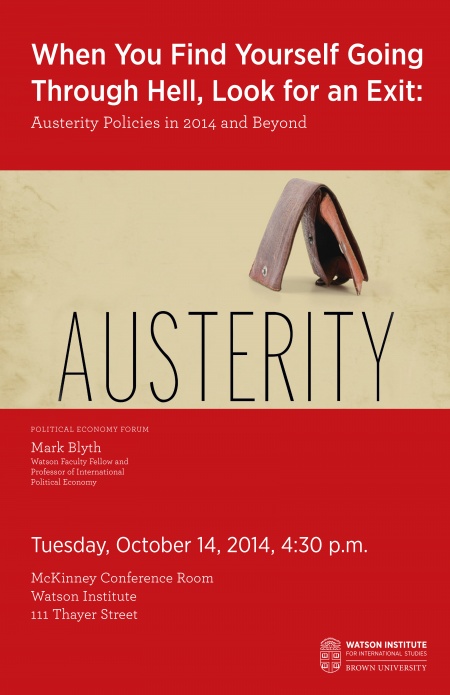 Mark Blyth is Professor of International Political Economy and faculty fellow of the Watson Institute for International Studies at Brown University. He is based in political science but his research begs and borrows from multiple fields. He is particularly interested in how uncertainty and randomness impact complex systems, particularly economic systems, and why people continue to believe particular economic ideas despite buckets of evidence to the contrary. He was a member of the Warwick Commission on International Financial Reform that made an early case for macro-prudential regulation. He is the author of several books including Great Transformations: Economic Ideas and Institutional Change in the Twentieth Century (Cambridge: Cambridge University Press 2002, and most recently, Financial Times Books of the Year (economics List) Austerity: The History of a Dangerous Idea (Oxford University Press 2013), which questions the return to prominence of financial orthodoxy following the global financial crisis.

His paper is available here.

The Watson Political Economy Forum (PEF) is a place where Brown scholars, Watson visitors, post-docs and graduate students can meet to discuss and share research on the political economy of the advanced industrial states.