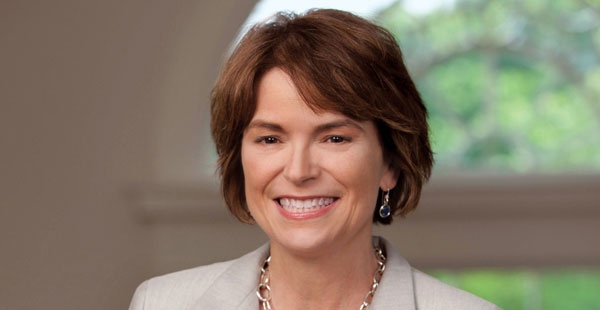 President, Professor of Economics and International and Public Affairs

Christina Paxson is the nineteenth president of Brown University and Professor of Economics and Public Policy. She assumed the role of president on July 1, 2012.

As an early initiative of her presidency, Paxson worked with students, faculty and staff to develop Building on Distinction, a 10-year strategic plan launched in 2014 that is shaping the growth and progress of a University committed to addressing the defining challenges of the 21st century. She is leading Brown in its increased emphasis on teaching, research and scholarship that spans disciplines in such areas as bioengineering, environmental security, data sciences and addressing societal issues through humanistic inquiry.

Key areas of focus of her presidency include empowering collaboration and cultivating entrepreneurship among teacher-scholars and students; expanding Brown’s rich research environment being developed in Providence’s Jewelry District; and creating engaged learning programs that integrate teaching with community-based research and real-world experiences.

Building on Brown’s academic excellence and preparing students to thrive in today’s complex and changing environments are defining objectives of President Paxson’s presidency. Under her leadership, Brown opened a new School of Public Health, the University launched the Institute at Brown for Environment and Society, and Brown is experiencing a renaissance in social sciences in connection with the Watson Institute for Public and International Affairs.

To ensure that the excellent education the institution provides is both accessible and affordable, President Paxson has sustained undergraduate financial aid as the fastest growing area of Brown’s budget. She has lead Brown in increasing scholarships for low-income students and accelerating support for middle-income families, while also improving support for graduate students. Through a commitment to working with students to identify new initiatives to meet emerging needs, the University under President Paxson has launched such efforts as the First-Generation College and Low-Income Student Center.

In the fourth year of her presidency, President Paxson led an inclusive, campus-wide effort to create more just, diverse and inclusive communities in support of Brown’s mission of education and discovery. In February 2016, Brown released Pathways to Diversity and Inclusion: An Action Plan for Brown University, which provides a detailed set of action plans to meet the goal of creating knowledge and preparing students to serve their communities, the nation and the world.

President Paxson is driving investment in all of these efforts with an eye toward positioning Brown to be a leader in teaching, research and innovation in the decades ahead.

While at Princeton, President Paxson also served as associate chair and chair of the Department of Economics and was the founding director of a National Institute on Aging Center for the Economics and Demography of Aging. In 2000, she founded the Center for Health and Wellbeing, an interdisciplinary research center in the Woodrow Wilson School for which served as the director until 2009.

President Paxson is nationally recognized as a leader in higher education and a respected economist and public health expert. Her early scholarship focused on international economic problems of labor supply, mobility, savings, inequality, and aging, with later research focused increasingly on the relationship of economic factors to health and welfare over the life course, particularly on the health and welfare of children.

She has been the principal investigator on a number of research projects supported by the National Institutes of Health, including a study of adversity and resilience after Hurricane Katrina. She has authored or co-authored numerous journal articles, was elected vice president of the American Economic Association in 2012, and is a member of the Council on Foreign Relations. And in January 2016, the Federal Reserve Bank of Boston named Paxson to its board of directors.