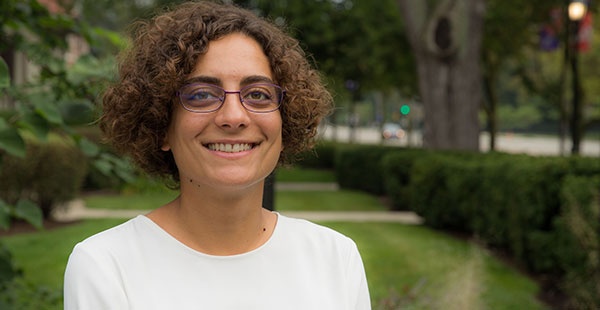 Assistant Professor of Sociology at the University of Washington
Postdoctoral Fellow in International and Public Affairs, 2020-2021

Magda Boutros is a sociologist who studies social movements against policing and the criminal justice system. Her book project examines contemporary French mobilizations organizing against racialized policing practices. It analyzes how movement actors overcome opacity around police actions and the French race-blind ideology to produce knowledge about the practices they denounce, and how different modes of knowledge production matter for the movement’s outcomes. She previously studied anti-sexual violence movements that emerged in Egypt during the 2011 revolution.

Magda’s work appeared in Theory and Society, Law and Society Review, Lien Social et Politiques, and Mouvements. She has also published in non-academic publications such as La Vie des Idées and AOC. She received her PhD in sociology from Northwestern University in 2020.

1) How do collective actors challenge policing and criminal justice systems, in Western democracies and in non-democracies, and with what outcomes? Bridging social movement theory and scholarship on law, crime, and society, I have studied movements in Egypt and France that contest policing and judicial practices. In France, I study top-down movements led by transnational organizations to combat racial profiling, bottom-up victim-centered movements for truth and justice following police killings, and locally anchored organizing efforts against discriminatory police harassment. In Egypt, I studied activist groups that organized civilian patrols to prevent and stop sexual violence in public spaces, including Tahrir square during demonstrations and downtown Cairo during Eid holidays.

2) How do social movements overcome knowledge gaps pertaining to the social problems they denounce, and how do their knowledge making practices matter for the movements that they build and for their political outcomes? I draw on social movement theory and science and technology studies to examine different modes of knowledge production within social movements. In my project on France, I compare three modes of knowledge production: conducting research in cooperation with scholars, documenting victims’ experiences, and using the law to gain access to official records.

3) How do social movements mobilize the law to challenge law enforcement practices? I draw on law and society scholarship to examine judicial strategies and their outcomes. In particular, I’m interested in comparing civil law vs criminal law litigation challenging police brutality and discrimination.

4) How do activists expose racialized practices in race-blind contexts? I draw on race theories to examine contemporary anti-racist movements in France and to analyze how they produce knowledge on the role of race in society, and how this knowledge shapes their discourses about race and racism.