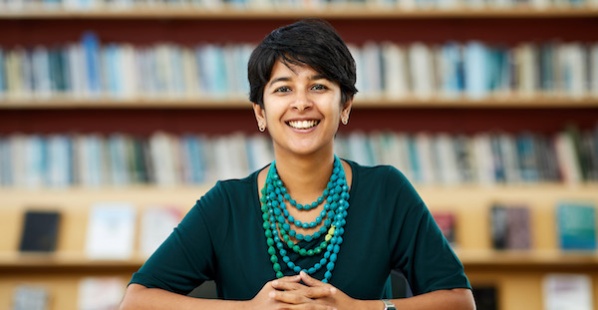 Sahana Ghosh is a social anthropologist whose research uses ethnographic and historical methods to study the intersections of gender, mobility, borders, and policing in contemporary South Asia. She is interested in ethical and political questions of ethnographic practice from an intersectional feminist perspective.

Her academic writing has appeared or is forthcoming in the American Anthropologist, Comparative Studies of South Asia, Africa and the Middle East, Gender, Place & Culture, and the Economic and Political Weekly. She also writes to critically engage a broader public on topics of her expertise.

She received her PhD in Sociocultural Anthropology and Women’s, Gender and Sexuality Studies at Yale University in 2018.

Broadly, my research concerns borders, the mobility of people and goods, trans/national security assemblages, and gender and geo/politics. I use ethnography and feminist approaches to locate, analyse, and narrate how uneven geographies of movement come about in and through the lives of those whose mobilities are constructed as threats at different scales.

I am writing my first book on the lived experiences of militarization of the “friendly” border between India and Bangladesh. It traces the biography of the border through the transnational networks sustaining agrarian commerce, everyday mobility of people and goods, and kinship in impoverished borderland lives and the shifting practices of border security on the ground. Through this account of and from the borderlands, my work rethinks statist and popular understandings of dangerous mobilities and national security at borders with gender as a central analytic. The book challenges methodological nationalism to examine how “India” and “Bangladesh” become meaningful as national identities and economies at their shared border.

I am conducting research on two new projects: on the gendered labors of soldiering in India and the transnational governance of labor migration in Bangladesh.

2020      “Chor, police, and cattle: The political economies of bovine value in the India-Bangladesh borderlands”, for South Asia: Journal of South Asian Studies, forthcoming.

2019      ‘”Everything must match”: Detection, deception and migrant illegality in the India-Bangladesh borderlands’, American Anthropologist, forthcoming.

2019      “Introduction” to Special Section on Living with Surveillance. Comparative Studies in South Asia, Africa and the Middle East, forthcoming in issue 39 (3).

2017      “Relative Intimacies: Belonging and difference in transnational families across the Bengal borderland”. Economic and Political Weekly, vol LII, no 15.

I have previously taught classes on development, gender and sexuality, contemporary South Asia, and anthropology and postcolonialism.

2018    “On militarization, violence, and justice in South Asia’s borderlands” – Conversation between Sahana Ghosh and Hafsa Kanjwal for the Polis Project’s Public Lecture Series on Bodies and Borders at the Graduate Center, CUNY, April 20th.

2017    ‘Bureaucratizing “choice”: Longing, belonging, and not knowing in the India-Bangladesh exchange of enclaves, Special Issue ‘India at 70: The Many Partitions’, Café Dissensus, August 15, 2017. https://cafedissensus.com/2017/08/15/bureaucratizing-choice-longing-belonging-and-not-knowing-in-the-india-bangladesh-exchange-of-enclaves/

2017    ‘Under the sign of security: Why the bogey of “the illegal Bangladeshi immigrant” is so powerful across elite homes in urban India’, Kafila. (with Rimple Mehta).

2016   Review of Bengali film, Sankhachil, and popular representations of the legacy of Partition and contemporary politics of the India-Bangladesh border

2013    Op-ed on violence and justice along the India-Bangladesh border, The Hindu. http://www.thehindu.com/opinion/op-ed/actions-that-border-on-the-barbaric/article5171113.ece

In this piece, Ashutosh Varshney and Sahana Ghosh are cited as among thousands of signatories on a letter condemning criminal charges against The Wire for a story it published about COVID-19.

Postdoctoral Fellow Sahana Ghosh co-authored this piece on The Conversation, "Those committed to justice and fighting fascism must recognize and reject the linked logics of weaponized citizenship in Kashmir and Assam."

Living through Surveillance: Recasting the study of Civil and Military Relations

In December 2019, Sahana Ghosh edited, "Living through Surveillance: Recasting the study of Civil and Military Relations,"  a special section with five essays appearing in the latest issue of Comparative Studies of South Asia, Africa and the Middle East. The piece also features an Afterword written by Ilana Feldman (George Washington University).