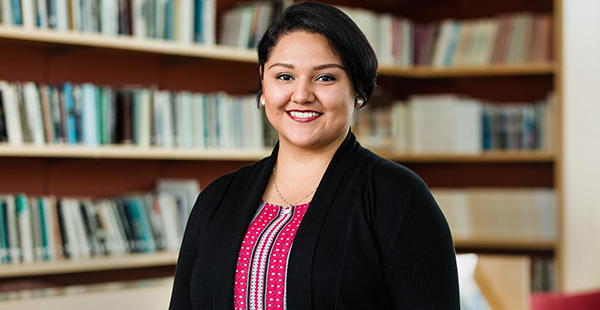 Assistant Professor of Geography and Chican@ and Latin@ Studies
Postdoctoral Research Associate in Race and Ethnicity
Postdoctoral Fellow in International and Public Affairs, 2017-2019

Almita A. Miranda is a Presidential Diversity Postdoctoral Fellow in the Center for the Study of Race and Ethnicity in America (CSREA) and the Watson Institute. Miranda received her MA and PhD in anthropology from Northwestern University, where she also completed her BA. Her research interests are in cultural and political anthropology, race/ethnicity, gender, political economy, (im)migration, citizenship, transnationalism, Latin@ families and community organizing in the U.S. and Mexico. She has taught courses in Anthropology and Latina/o Studies at Northwestern University and Dartmouth College.

Miranda’s research focuses on Mexican mixed-status families, examining the ways in which undocumented immigrants, lawful permanent residents, and U.S. citizens navigate the legal and social constraints to which their family’s uncertain status exposes them in the U.S. and in Mexico. Her work has received funding from the National Science Foundation (GRF), the Wenner-Gren Foundation for Anthropological Research, the Roberta Buffett Center for International and Comparative Studies, and Dartmouth’s César Chávez Dissertation Fellowship, among others.

Miranda has also coordinated a community-engaged project with undergraduate and community volunteers, conducting oral history interviews with former braceros and their families in the Chicago area as part of the Smithsonian’s bilingual exhibition, Bittersweet Harvest: The Bracero Program (1942-1964). She has served on the board of the Association of Latina and Latino Anthropologists (ALLA), and has spearheaded a mentoring program for junior scholars of color.

Miranda is working on a book manuscript based on her dissertation, “Living in Legal Limbo: Migration, Citizenship, and Mexican Mixed-Status Families in the Neoliberal Era,” a dual-site ethnographic study of Mexican mixed-status families and return migrants. She examines the ways in which the legal boundaries between citizens and noncitizens become blurred in mixed-status households, and argues that the ability of individuals to remain in the U.S. no longer depends on their legal status alone, but has become inextricably tied to those of their family members—producing a form of liminal citizenship. Drawing on long-term ethnographic fieldwork, working with immigrant rights organizations, Latino mixed-status families in Chicago, IL, recently returned migrants (including deportees) in Zacatecas, Mexico, and local and transnational social actors, Miranda explores larger questions of state power and liminal subject-formation; race, legality, and citizenship; intra-household gender relations; and shifting patterns of kin and transnational migrant networks.

Miranda’s research contributes to larger academic and public discussions of unauthorized migration under neoliberal globalization, attending to both the political-economic and legal processes contributing to the rise of mixed-status families, and the ways in which citizenship and “illegality” are being reconfigured and experienced “on the ground.”