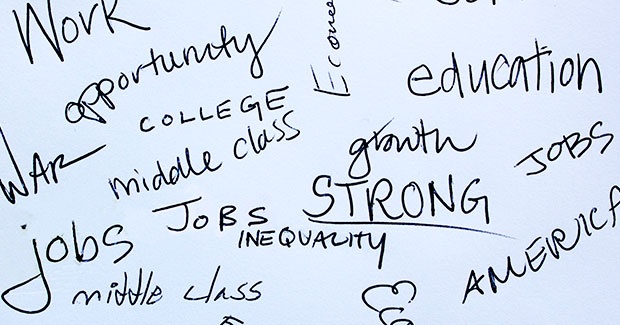 In the modern era, presidents rarely dared to veer from some variation on the word “strong.”

The state of the union is “_______.” Richard Arenberg, public policy lecturer and Congressional expert asked a seminar crowded with public policy and political science concentrators and graduate students to predict how President Barack Obama would complete this expected sentence in his 2015 State of the Union address. Arenberg, public policy fellow Marc Dunkelman, and students had gathered at the Taubman Center to discuss the upcoming address and watch the live broadcast. Before each student offered their own prediction, Arenberg offered a big hint: in the modern era, presidents rarely dared to veer from some variation on the word “strong.” Arenberg noted one exception: Gerald Ford, delivering his address on the heels President Nixon’s resignation, chose the deflating, “The state of the union is not good.” Arenberg also asked students to predict which key words Obama would use most.  Guesses focused around jobs and the economy including “growth,” “opportunity,” “inequality,” and “jobs” and, “middle class.” According to Mashable, “economy” edged out “jobs” as the most-repeated policy-related word in Obama’s address. Arenberg offered both historical context (the first televised State of the Union was delivered by Harry Truman in 1947) and predictions (“Almost nothing Obama proposes tonight will pass Congress in the next year”). Arenberg added that even if many of the Presidents proposed policies are rejected by Congress, this year’s address is significant in that it “sets the frame for the 2016 presidential election.”