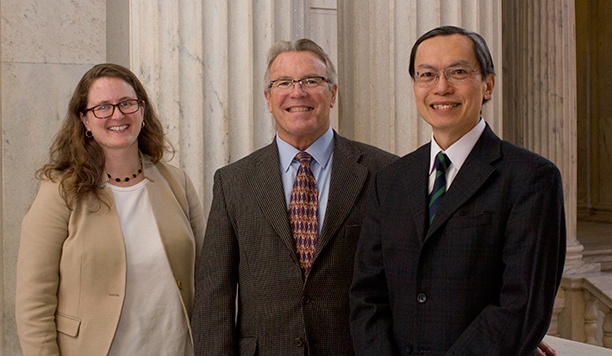 “Rhode Island benefits when thought leaders like you bring research to discussion of public policy,” said DiPalma, who serves as vice chair of the Senate’s finance committee in addition to being a member of the education committee.

Keynote speaker Dr. Christopher King, professor at the Ray Marshall Center for the Study of Human Services at the University of Texas at Austin’s LBJ School of Public Affairs, presented his research on the effectiveness of using two-generation programs to improve family economic well-being. Two-generation programs explicitly combine interventions targeted at both adults and their children. Research has demonstrated that this family-oriented approach to poverty is much more successful than separate programs to address children’s and parents needs. In addition to the speaking event, Cooley and Wong produced a policy brief outlining the two-generation approach: the theoretical basis for the approach as well as emerging evidence of its effectiveness.

The Policy Institute for Family Impact Seminars, a nonpartisan organization, partners with leading universities to bring high-quality, objective policy research to state legislators about issues affecting families. The Taubman Center for Public Policy at Brown University was selected as the Rhode Island site in the national network of Family Impact Seminars in January 2014.