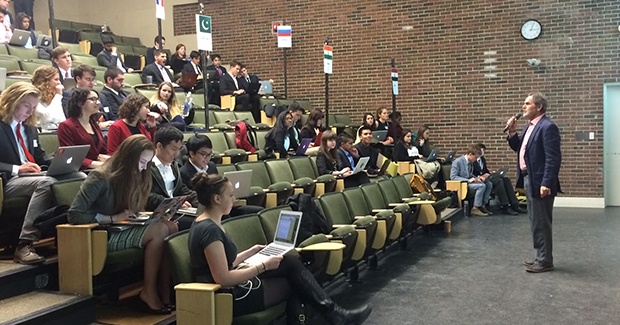 "While I like to think that I always had a more nuanced view of diplomacy, participating in this simulation highlighted for me how much international negotiations involve balancing a multitude of interests."

As Rhode Islanders and concerned citizens around the world continue to monitor the landmark Iran nuclear deal and the recent Iranian missile tests, students at Brown University’s Watson Institute joined scholars and practitioners on Saturday, April 11th in a negotiation simulation responding to allegations that Iran is violating the agreement. Organized by professors Nina Tannenwald and Nicholas Miller, students were split into 13 delegations, responsible for responding to these allegations and recommending possible solutions in an effort to prevent a nuclear arms race.

“As a member of the Russian delegation, I was impressed by the energy and dedication that the delegates displayed throughout the day. This goes especially for my fellow heads of delegation in the P5 group (France, UK, Russia, United States and China), whose dominance in the negotiations made the simulation feel more realistic than similar events I had been part of in the past. This made up for some of the less credible aspects of the simulation, such as the extremely compressed time frame, which made it difficult to bring issues unrelated to the Iran deal to the table as bargaining chips, or the extensive monitoring that Iran submitted to in our final agreement.

The most evident lesson for me throughout the day, however, was the incredible impact of face-to-face diplomacy in all its possible permutations: whether in plenary debates, in bilateral and multilateral meetings or through shuttle diplomacy, interacting directly and personally with our counterpart not only made delegates more flexible in finding solutions, but allowed us to build some form of rapport. This rapport ended up shaping the dynamics of the talks and the nuts and bolts of the final document, even as the framework of interests that undergirded each country’s position was beyond our control – a powerful testament to the complex and, to some extent, unpredictable nature of state interaction.”

"For the simulation, I played Head of Delegation for the Kingdom of Saudi Arabia. My delegation’s job was to pressure the international community to reinstate sanctions against Iran, who had been engaging in suspicious nuclear activity. In order to pressure other states to punish Iran, we continuously implied that Saudi Arabia would develop its own nuclear program to match Iran’s, unless the UN reinstated the sanctions. As the Saudi delegation, we emphasized the commitment of our nation to having a Nuclear-Weapon-Free Zone in the Middle East; however, throughout the negotiations we also sought to ensure that the United States or Pakistan would protect us against nuclear threats, in case Iran was allowed to continue with its nuclear program.

Protecting Saudi Arabia’s interests throughout the negotiations was complicated: most Western countries did not consider Iran’s actions to be threatening, and did not wish to snap back the sanctions as outlined in the JCPOA. Thus, we had to balance Saudi Arabia’s reputation as an advocate for nuclear non-proliferation, while simultaneously presenting veiled threats regarding the development of nuclear weapons. While Saudi Arabia negotiated mostly with the United States and Pakistan, this simulation was also interesting because we managed to engage in secret talks with Israel. Even though these two countries do not have diplomatic relations in real life, our Head of State (played by Professor Miller) encouraged us to cooperate in antagonizing Iran. While this was an unexpected and highly unlikely situation, I was pleased to see that our delegation took advantage of sharing a common enemy with Israel, and that we succeeded in putting forward Saudi Arabia’s national interests."

"When the actual Iran deal was announced last summer, I constantly heard refrains of “The US could have gotten a better deal”. I felt like underneath these statements was the assumption that American negotiating only comes down to considering the interests of the US and the party sitting across the negotiating table.

While I like to think that I always had a more nuanced view of diplomacy, participating in this simulation highlighted for me how much international negotiations involve balancing a multitude of interests. As a representative of the United Kingdom, I was unsurprised that I had to take into consideration the many differing interests coming from the variety of UK allies. While I was expecting to have to do this, it was still no easy feat, and really pushed my delegation and me to fine-tune our public and private rhetoric.

What I personally found most surprising about the simulation was the degree to which I had to manage the interests of different delegates. Each delegate was assigned a position, such as domestic politics advisor or science advisor, and had to advocate for the priorities of someone in that position. My job involved trying to figure out what interests should be prioritized in any resolution, and which aspects to prioritize when presenting options to our head of state. This involved a careful managing of concerns and helped put me in the mindset of someone like the Secretary of State who is receiving different advice from multiple advisors."